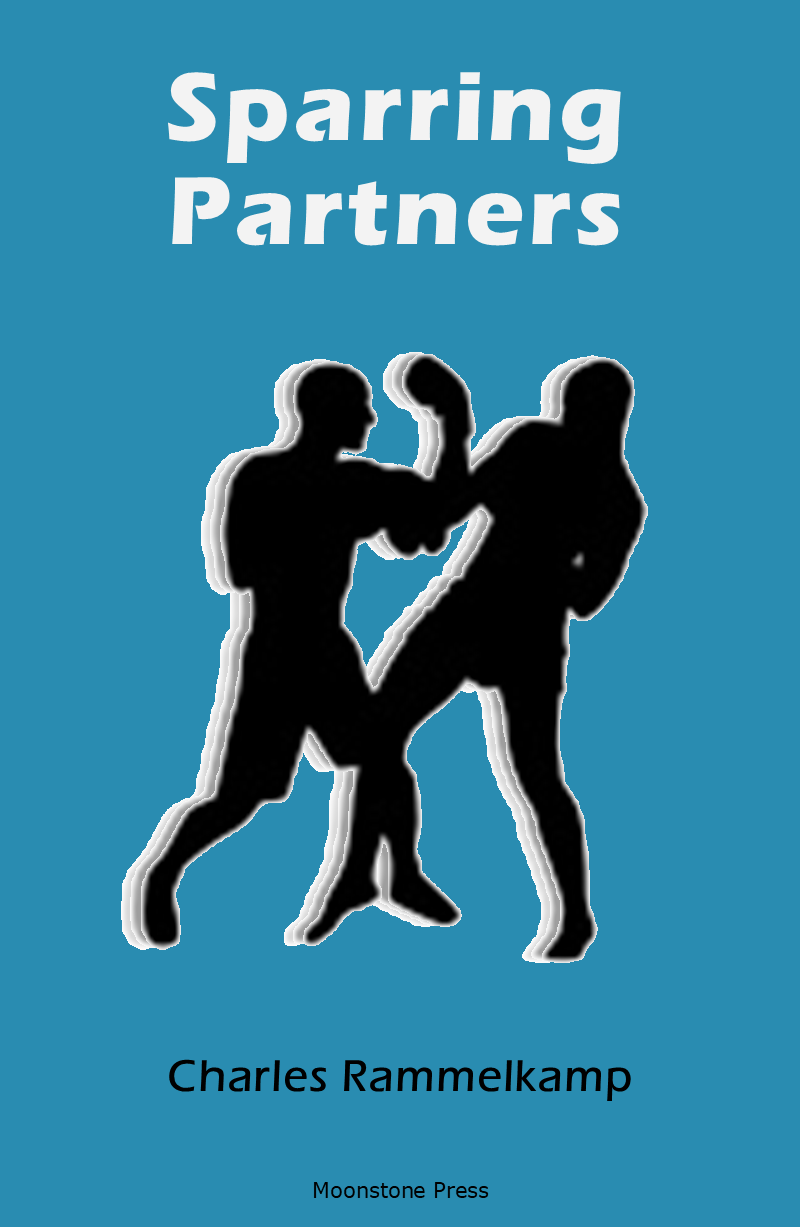 Charles Rammelkamp’s latest chapbook, Sparring Partners, features three very different main characters: one, a woman neighbor who was dying of cancer; the second, Fred, Rammelkamp’s college roommate back in the day, who, before his university days, served a tour in the hell jungles of Vietnam; and third, Flanagan, an older gent, retired “associate commissioner” of some city department or other, and an ex-boxer with whom Rammelkamp spends a lot of time listening to at their local gym, where they both work out and avail themselves of the steam room afterwards.

The collection opens with a ruminative one-poem section titled “Overture,” and it takes place during a bus ride, presumably in Boston, where Rammelkamp attended grad school.  Fitting in with the general theme of boxing and combat, the poem is titled, “Down for the Count.”  And it’s obvious that it’s not just boxing that can K.O. you, but the body’s ravages and betrayals:  “I saw you in your turban/three weeks after the chemotherapy began,/looking like a maharini.”  What comes across most strongly in this affecting poem is the dignity, even regality, Rammelkamp invests the “You” with:  “You know the look—tragic royalty,/a blend of dignity and obsolescence,/ somebody holding her head up—somebody about to die.”

Fittingly, it’s drizzling out, the external weather mirroring the sadness of the “You’s” situation.  but there’s also some grim humor in the poem, since the turban reminds Rammelkamp of Muhammed Ali, at the height of his boxing powers, teasing the rather pompous broadcaster, Howard Cosell, by plucking off the latter’s toupee.  Following this thought, Rammelkamp thinks about boxers who tried to make comebacks, ending with the disastrous one that Ali attempted, the crowd booing his Parkinson-hampered attempts to do his signature “rope-a-dope” maneuver.

It’s as if Rammelkamp is saying we’re all trying to make hopeless comebacks, even, maybe especially, this neighbor he’s seen around but has never actually talked to, who he thinks about talking to, but really has no idea what to say to her in her present, perilous condition.  He’s almost desperate to make human contact, to show solidarity in the face of mortal odds, but nothing that rattles through his brains seems appropriate, and “…when I looked up, you were already gone.”

In “Fred,” the second section, Rammelkamp details the college career of his freshman year roommate, a returning Vietnam vet.  Rammelkamp nails the poor guy’s mindset in two lines from the opening poem in this mini-sequence, “Fred Goes to College”:  “I always imagined that life for Fred/was like waking up in the middle of a fire drill:”  The rest of the poem is an extended metaphor of what transpires in a fire drill, only for Fred it’s his panicked reality, day in, day out.

We see his precarious mental state even more tellingly in the next poem “Fred Goes on a Date.”  Fred is described as “an alarm clock, Fred was always alert/his nerves on constant Code Red…”   But on his date with Vickie Sue Collins, “a buttery blond farm girl from Meredoshia,” Fred dresses carefully in “sport coat and tie,” and buys his date a bouquet.  But on their way to the movies, a car backfires, “as they ambled across campus/and Fred went down on his face in the mud.”  Fred may have left Vietnam, but Vietnam will never leave Fred, as it has refused to leave so many guys my age who got chewed up in its meat grinder.

The remainder and bulk of the chapbook is devoted to Flanagan, a fellow gym rat who freely dispenses wisdom about life, love, and especially his great passion, boxing.  Flanagan shadowboxes in the locker room, the showers, and especially the steamroom:

All I could make of Flanagan,
a crouching silhouette
ducking and sidestepping in the haze,
a holy man in ecstatic prayer…

As if Flanagan’s acolyte, Rammelkamp has asked him what he thought of the pro fight last night, maybe not expecting the diatribe delivered by Flanagan with the force of an enraged Old Testament prophet:

“Flanagan snorted his disgust.
‘What a bum,’ he grunted.
‘He ain’t no boxer; he’s a streetfighter,
hittin’ below the belt.Buttin’ with his head.”

In “Stings Like a Bee,” we see the frailer side of Flanagan, for whom Rammelkamp feels great affection, in the way you would toward a favorite, a little past it, uncle.  Here, the older man is concerned about his weight, to the point that he needs reassurance that he’s not putting on the pounds.  But it’s more than that: old age and gravity are catching up with Flanagan; his body is ancient, “its sagging putty-colored flesh…”  And finally Rammelkamp admits to himself he has been lying to Flanagan when he says he looks fine, for “A burden of deceit crept over me/and I excused myself/and stole into the shower.”  Rammelkamp adds a bit of wit at the end of the poem, glancing at himself in the mirror, “the love handles/joggling at my sides.”  So no one’s immune to see their bodies’ failings, least of all the gimlet eyed poet.

Fittingly, in a collection so indebted to “the sweet science,” the final poem, “Living,” is Flanagan’s bitter lament for the still living Muhammed Ali (without his mentioning the name, we know it’s Ali), or rather Flanagan’s refusal to believe that the ex-champ incurred Parkinson’s because of all the shots he took to the head in the ring.  The ruling mood of the poem, once again set in the gym’s steamroom, is sadness for the fleeting nature of greatness and of life itself, and also, unsated, fear that the same could befall Flanagan.  Of Ali, Flanagan says, “‘Jesus!  Did you see him in Atlanta?/hands shaking  like St. Vitus/when he held the Olympic torch?’”  Flanagan sits and bemoans in disgust that some idiot had the temerity to joke that Ali was coming out of retirement.  With the steam nozzle shooting out vapors, Flanagan “disappears in the clouds./The perfect way to go, I think,/as he vanishes into the mist.”   Those last lines remind me of the great line in Tennyson’s Idyls of the King, in which the dead King Arthur is described as “From the great deep to the great deep, he goes.”

Sparring Partners is only as much about boxing as Moby-Dick is about whaling.  Like any true work of art, it’s about life, its fleeting glory, its many sadnesses, its long decline, and finally its inevitable disappearance.  In the end it’s about accepting that we all fall and break apart, and as such, it’s a terrific read, well worth your time.

About the reviewer: Robert Cooperman’s latest collection is Reefer Madness (Kelsay Books).  His most recent chapbook is All Our Fare-Thee-Wells (Finishing Line Press).  Forthcoming from Apprentice House is Go Play Outside.

← A review of Open Secrets: The Ultimate Guide to Marketing Your Book
An Appreciation of Zora Neale Hurston and Their Eyes Were Watching God →