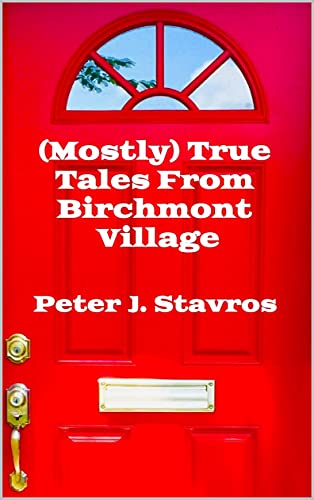 Mostly True Tales from Birchmont Village is a gentle comedy reminiscent of Stephen Leacock’s Sunshine Sketches of a Little Town and Garrison Keillor’s novels. The humour derives from idiosyncratic characters who appear in the seven, chronological stories that make up the book. Stavros is an author and playwright in Louisville, Kentucky, whose first collection of short fiction won the Etchings Press 2020 book prize.  His writing has appeared in a variety of periodicals. Three of the stories in Mostly True Tales were published in the Saturday Evening Post in 2017 and 2019.

In the first story, “The Time the Johnsons’ House Caught Fire”, the home of a family of four, all away at the time, catches fire twice in one day.  At first, the neighbours react in a  petty, gossipy way. A homemaker, for instance, complains about the drop in her water pressure from the use of the fire hoses.  As a crowd of onlookers gather, someone blames the fire on shelves “crammed with musty, dusty books”, though no one has been in the Johnson’ house!  Soon the onlookers turn the situation into a festival.  Billy Milner, a ten-year-old counting the days until he turns eleven, sets up a lemonade stand.   A group of renters in a two-bedroom suite in the Stonemill Apartments put on an impromptu concert. Food is passed around. Old Man Williams brings out his bocce balls, and a twenty-something couple kisses passionately under a neighbour’s weeping willow.

Readers may feel that Birchmonters are silly, uncaring gossips, but in the next story when they all get together to find the Johnsons’ cat, Chubz, they appear in a better light.   After a highly organized but futile search, Chubz is found asleep at the feet of the twenty-something couple kissing in the Johnson’ garage.  And the next episode, about a power outage on July 4th, ends with a happy show of unity among the village residents.

My favourite story, “The Time A Diamond Ring was Found…”, takes place during a village yard sale on Labor Day weekend.  Billy, now a year older, sells lemonade with the cat at his feet. A group of young college grads sells vegetables – and herbs – from their communal garden.  A “frenetic back and forth barter” goes on, until interrupted by shrieks from a very proper old woman. She has found a diamond ring in a tweed sports coat “with suede elbow patches” that she had bought for her teenage grandson “to wear on his prep school interviews that fall”. Though clearly out of touch with what a teenaged boy would want to wear, she finds the ring’s owner and displays surprising generosity. The neighbours follow her example, cutting prices and giving each other bargains.

Another crotchety character is Old Man Williams, who complains to the police about a blue heart spray-painted on his driveway. The perpetrator, when discovered, only wanted to spruce up his drive, which is chipped and cracked, and Old Man Williams appreciates the gesture.  In the next story, “The Time Santa Almost Didn’t Make It”, he sees the village from a new perspective and goes outside his comfort zone for the sake of the community.

In the final story, the Covid- 19 pandemic brings out the worst in the community until a leading member of the town council drives around in his golf cart with a bull horn rallying them to cooperate.  A village website gets set up; the needy get help; the spray painter leaves encouraging messages around town, and the taxidermist uses his sewing skills to make face masks – from donated cloth.  A final unifying event brings residents out on their front steps and balconies, while the kissing couple stares passionately at each other from opposite sides of the street.

Never mind that the neighbours never seem to get to know the Johnsons or the shifting group of music-loving students in the Stonemill Apartments. Peter Stavros has written the kind of calm, amusing, feel-good book that people need in times of crisis. He suggests that, despite their quirks, people are basically cooperative and good-hearted, that life goes on, and that the more things change, the more they stay the same,

About the reviewer: Ruth Latta’s latest novel, A Girl Should Be, to be published by Baico in the fall of 2021, is set during the Roaring Twenties and Dirty Thirties (of the 20th century) and reflects those tempestuous times.