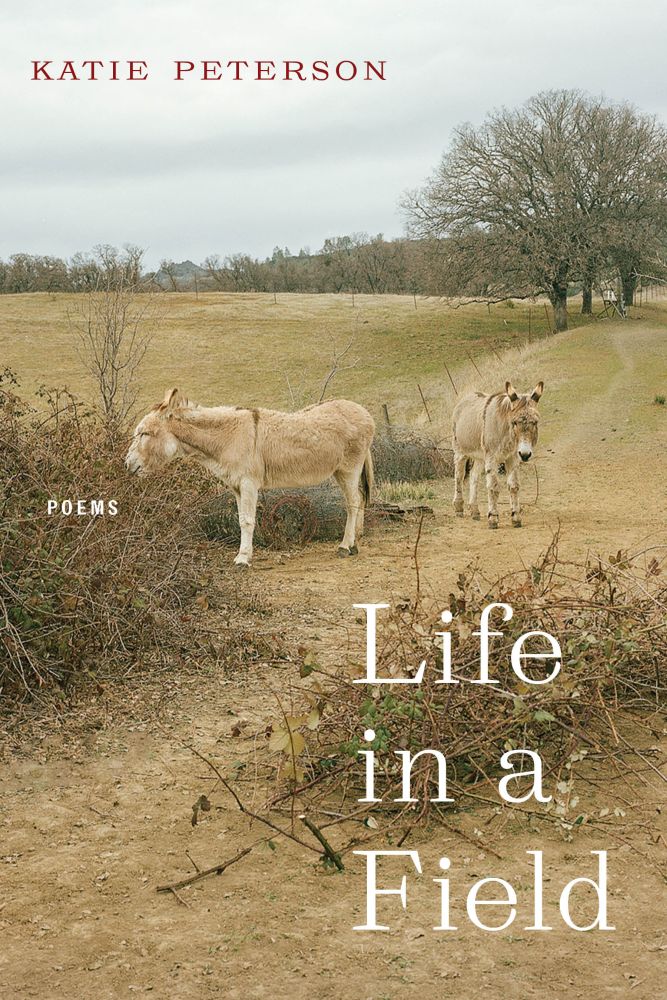 The first page of this book of poems starts with a simple, direct statement: “In this story there is a girl and there is a donkey.” (17) But is it really so simple and direct, considering that the cover of the book says “Poems,” while this first sentence tells us it’s a “story”? I call it a book of poems because to me, that’s what it seems, plus I always judge a book by its cover. In all seriousness, the book’s direct, simple sentences belie many dualities and strange uncorrelations throughout the book that stretch our attention.

When I look at a donkey’s face (there are two in a photograph on the book’s cover), I see a vulnerability in the expression, coming from the slant of the eyes and the slight silliness in the largeness of the ears, suggesting a melancholy that leads me to suspect the animal might do better with a bit of attention or comforting. In a horse’s face, by contrast, I see something sturdy and handsome. The central image that drives this book is a child speaking softly into a donkey’s ear. The poignancy of this scene is never emphasized or exploited, which allows the emotion to expand in its own way, having a gradual effect on the reader. Is the donkey sad? “How can the donkey be sad?” the speaker tells us. “He is a donkey. He accommodates, based on resources. He goes where the food is.” (44) A phrase on the last page of the book comes to mind: “cold clarity.” (91)

There is discussion of the type of fairy tale in which a troll prevents passage on a bridge unless a toll is given. This relates to the fable-like quality of the story of the donkey and girl; the girl finds the donkey in a field where she is not supposed to go. What is the payment of passage there? There are discussions of what “story” and “plot” are. (As to the question of whether the book is poetry or a story, perhaps the answer is that these are poems about a story). And sometimes the girl and the donkey are left very far behind in inexplicable ways. After the speaker brings up the issue of whether or not this is “narrative,” suddenly we are in ancient times. “At the beginning of what is now England, in that dark part of history, humans learned certain abilities, for example, literacy…and lost them when violence between tribes overtook the skeleton of the Roman system.” (21) This passage is an anomaly in the book, so perhaps we must relax our minds, try to unthink why and how this expands the impact of the book. Either that or simply be bewildered.

There is description of the “childhood” of the donkey, his relationship with his mother, how he is raised and taught to toil in the fields. And the girl too, we are shown something of her upbringing and her desires and aspirations. Still, we are at somewhat of a distance from them—but a warm kind of distance. We are not, however, distant from the scene of it. We are told of the whiteness of the fur inside the donkey’s ear. I can imagine stumbling on the sight of a girl speaking into a donkey’s ear and thinking, Maybe I could write a poem about this. But to write a whole book around it is to step much further inside the scene.

On the first page, we are told that the girl has something to say to the donkey. “What is it?” (17) As the book unfolds, we are not so concerned with the answer to that question. Indeed, it seems we’ll not be told the answer—and perhaps that is best. We are surprised to be given the exact answer to the question in the last few pages (I won’t spoil it by quoting it here). The answer is something not comforting. In fact, it’s something scary, although the wording of the simple sentence might be taken from a children’s fable. So perhaps it shouldn’t be taken too seriously. And then, in the last paragraph, there is a hint of the effects of global warming. Does the story yield to reality in the end? Maybe. But maybe the story and the reality are both worth realizing and embracing together. The book “makes me happy,” states one of the endorsers on the back cover. I can relate to that sentiment. Simply and directly.

About the reviewer: Jeffrey Kingman’s poetry collection, BEYOND THAT HILL I GATHER, was published by Finishing Line Press in June 2021. His chapbook, ON A ROAD, was published in December of 2019. He is the winner of the 2018 Eyelands Book Award for an unpublished poetry book, a finalist in the 2018 Hillary Gravendyk Prize book competition, and he received honorable mention in the 2017 Quercus Review Press Fall Poetry Book Award. He has been published in PANK, Clackamas, Visitant, and many others. Jeff has a Master’s degree in Music Composition and has played drums in rock bands most of his life.

← A review of Mario Writes a Poem a Day for a Year, and So Can You by Mario Milosevic
New giveaway! →