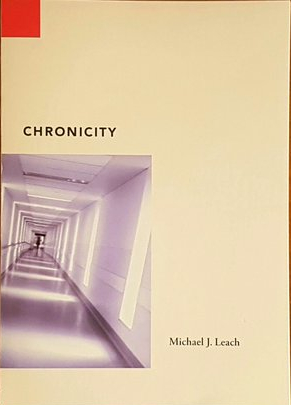 The word chronicity refers how chronic a condition is, that is, how long its debilitating impacts last. In the case of Michael Leach’s book, it might be a nod at the human condition, and our ongoing frailties and shared embodiment. There are many ways that this poetry creates meaning. There is semantics of course – the story created by the words and in Chronicity the stories are often medical, but meaning is also created sonically, rhythmically, and visually in ways that are difficult to explicate, informed by the arrangement of words on the page.  Leach manages the visual in particularly powerful ways in Chronicity. The concrete poems in the collection take on many forms, weaving and working through, around, between and besides their subject matter, playing with font, space, shape, and design to stretch out time, slow the reader, twist back on themselves, emphasise and create sound paths in the ear.  Leach is a doctor of Pharmacoepidemiology, and his writing is multi-disciplinary, drawing on his work with data, epidemiology, and pharmacy while also exploring the philosophical and existential problems of modern life: ecological, personal, collective,

At 24 pages, Chronicity is not long, but the poems benefit from a slow reading that draws out the correspondences and subtleties. Leach often uses scientific terminology, which is made beautiful by its rendering into the concrete, and profound by its presentation as art.

Many of the poems are playful, allowing words to function as visual representations of what they are saying, such as  “TRANSCENDING” in the first poem in the collection: “The Sense of Something”. The word breaks open textually, spreading across the page in order to conjur the “sixth sense”. Other poems change direction and split so that the reader’s eyes must track and reorient in a way that makes ordinary activity seem novel. An example of this is “Eight Minutes, 20 Seconds, and an Instant” which refers to the time it takes for light to travel from the sun to the earth. What the sun does in its continual arrival (“invisible cosmic travellers”) on Earth is simultaneously mundane and miraculous:

Heat half a world of water,
Paint landscapes and cityscapes,
Change the phases of matter,
Fabricate the hands of time,
Energise solar panels and flora,
Produce multicoloured spectra,
Warm an enormous atmosphere,
Refract through panes of glass,

Words take the shape of a hypodermic needle in “The Pharmacokinetics of Paracetamol”, where the slow metabolising of a painkiller is made visual and described in exacting detail which is oddly soothing and lyrical in a way that might actually ease a headache. “Blue Thought” explores depression, depicted as a series of barbs that are personal and exploratory, but also which, like “The Pharmacokinetics of Paracetamol” attempts to define a way out of the condition. The poem does this by visually breaking the pattern, changing from the repeated crests of despairing words to an interruption that glides down the page to “redirect us to better days”, fear converted to action as a form of phase change.

Though all of the poems in the collection have a clinical bent, they are not all about medicine. There are also love poems, such as the charming “N of 1” which explores attraction from a clinical perspective, but then transforms calm observation to exuberance via a body in motion:

dancing gracefully through space and time
cutting cleanly through free-floating atoms—
the elements of this country air
that we inhale.
Your wrists
twist
before me so dextrously
that you could be working bright magic.

The poems often work via proximity to one another.  For example, “An Abbreviated Case study in Geriatric Orthopaedics” (what a title!) a rounding procession of acronyms is played against the linear story of a patient, while the opposing page’s poem “Longitudinal”  bulges the opposite way completing the circle between the two poems. Like many of the poems in the book, “Longitudinal” uses rhyme and repetition to create a cumulative effect – trickle, ripples, prickle, cripples – words coming full circle to give a sense of completeness. The circular effect is hypnotic, moving beyond the meaning of the words and creating a meditative state as the words inflate and shrink back almost as breath.

Many of the poems in the collection are written through constraint. This is sometimes form, as in the Villanelle “2-1” or Ekphrastic as in “Frida Kahlo’s Backbone”, inspired by Kahlo’s painting The Broken Column. The constraint in this instance is not just to riff off of the painting, but to recreate a similar visual sense of constriction, while narrating Frida’s story in plain words.

“The Pages of Pharmacy History” splays out in rays that can be read in any direction, words mirroring and bouncing off one another through two intersecting riffs – “this old chemist” and “old prescription book”. Other poems are designed to be onomatopoetic, like the the tinkling sounds and spacings of “Wind Chimes”, or the call and response of “The Everyday Artist and the Everlasting Muse “ a meta poem that contrasts labour and inspiration. The book finishes with a series of eight haiku shaped like a helix that conjure inheritance, connection, family.  These poems are a lovely way to end the book, both sad and warm:

Coffee in autumn
she makes me smile even though
we talk of cancer (ix. Life Cycle)

The poems in Chronicity have a very light touch. The visual presentation feels entirely natural while still retaining the artistry of presentation. The poems are often earthy and humorous, but in these moments of ordinary action–the swallowing of a Panadol, a meeting at a party, the petulance of a patient or the contrast between practice and contemplation, there is always a moment of transcendence.

More on Chronicity can be found at the book’s website: https://mleach11.wixsite.com/writing/chronicity

← A review of Popular Longing by Natalie Shapero
New giveaway! →