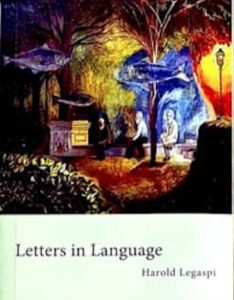 One of the great joys of poetry is the way it allows for the full embracing of multiplicity. Harold Legaspi’s Letters in Language presents as a poetic memoir in 39 non-narrative chapters, though it staunchly, deliberately, resists that categorisation, struggles against an easy narrative and creates intuited rather than expressed meaning. Cause and effect is undermined, and language is broken into images that mirror thought’s rapid-fire and often chaotic pace. The effect is powerful, fractured, and immersive. This is “Not the hero story of monolinguality.”  There are many voices here, some recognisable, others shifting away from the poetic “I” into a construct that could be many things at once, some pre-linguistic, such as scent or taste, or by a blurring of selves. Pronouns shift from a single person – the “I” who is remembering the past, to a ‘he’ that slips between self, father, son, lover, mother, grandmother or grandfather, a place, or even a language, in this case, Tagalog, personified. At times the work seems to present flickering illuminations – identities collide, morph, knit and unfurl, and language shifts back and forth, signifying and then undermining itself by cancelling out the previous sentence. In spite of the fragmentary nature of the text, there are constants that scaffold the work.  One of the most pervasive is the sense of nostalgia. We know that this is a work of memoir because of the way it continues to hark to a childhood:

My lola told me not to play that card. The lessons were in this child. Don’t flare your nostrils or I’ll Stick Out My Tongue.

Lola and Lolo – the grandparents, are ever-present throughout the text, as are the parents – the nurturing mother; the father who is sometimes the self, sometimes a lover, sometimes an uncle, and sometimes a distinct entity “Papa”, thwarted. Also constant is the link between English and Tagalog, languages which connect in subtle ways through the text, sometimes working back and forth between the languages, playing with sound or similarities, and sometimes breaking apart into full passages in Tagalog. Throughout the book there is the regular repetition of “Walis Tingting” – a Tagalog word for coconut leaf stick broom that appears in every poem. In my reading Walis Tingting functions as a way of making a new start – almost like a line break. Sweep out the old and sweep in the new.

The book works dialectically, between languages but also through time frames, diverging ideas, locations which shift between the Phillipines and Australia, often moving between the two in undifferentiated ways. This creates a sense of compacting, with past and present happening simultaneously.  The writing is paratactic: divergent ideas and phrases placed besides one another in a way that forces the reader to see these divergences as related:

Much of the book is charged with sexual tension – a coming-of-age/coming out that casts its gaze over the male body, sweetly at times, lascivious at others and sometimes sad, hinting at loss and suicide.

Concurrent with the discord are moments of tenderness and beauty – particularly with respect to the mother:

Nothing is safer than you reading out loud to me.

For his walks at sunset, light dappling, through open seas, tender strides as the tide broke. Waters reached his ankles, foaming around his jeans. He walked along the beach, stretched open like an empty stomach. Gathered shells and pipis as souvenirs. A dull spot among the sharper blue.

Letters in Language is a powerful collection: vibrant, sexy, sad, and very smart. The poems are dense, but also full of play, open space for reader interpretation, and steeped in cultural and literary references. As with all memoir, it is the exploration of a life, but is also an exploration of poetry, the way in which language itself creates reality and history, and very nature of the literary form. I’ve read Letters in Language several times now and each reading is different, providing new ways into the work, and the relationship between art and life. I am pleased and delighted to declare the book launched!

← A review of The Eggplant Curse and the Warp Zone by Shawn Rubenfeld
New giveaway! →