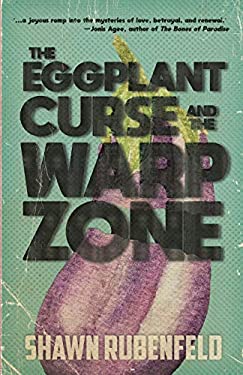 Before the reader has turned the first page, Josh is already a mess while grieving his mother’s passing. Also, Josh has always been burdened by self doubt and it doesn’t help that he begins collecting retro video games, a metaphor for being stuck (chasing nostalgia) in the past and zoning out. That speeds up the break up between Josh and Heloise, the love of his life, as they move towards divorce. Even worse, he has zero motivation left to finish his dissertation on Yiddish dialectology, which he cautiously equates with his dead mother. The sudden onslaught of addiction to collecting (and playing) retro video games plunges Josh into a sizable debt as well. He hasn’t talked much to his father since the funeral. His only sibling, his brother has dashed off to a kibbutz on a soul-searching mission. His addiction, Josh tells one of his therapists, is a result of hours and hours of playing them as a kid – a sarcastic nod to parental negligence!?

Shawn Rubenfeld has written an impressive debut novel. It explores the travails of having to step across from being a boy-man to a proper adult, taking responsibility for one’s actions. It also meditates on that unique institution of American loneliness. Only an American fiction writer, and I hope I am not putting too fine a point on it here, while sketching an American canvas can draw a life without extended family that should include aunts and uncles, loving or mean-spirited, first and second cousins, not to mention neighbors and childhood friends one grows up with and may stay in touch with despite moving away. I have lived in the US long enough to know that it’s possible to have that gift, but I also know that it is not a common feature of American life, a literary void that often sets up the mise-en-scene of white American novels, the invisible ghost that haunts the main characters – call it the quintessential curse.

Mr. Rubenfeld employs metaphors/images from video games, especially the retro world, light-heartedly yet with philosophical underpinnings. I was initially intrigued by the novel because I wanted to understand my own children and my own apprehension. Although Joshua Schulman turns out all right in the end, The Eggplant Curse and the Warp Zone serves as a cautionary tale. It is not a stretch to say that everyone grows up with an eggplant curse and a warp zone of his/her own. Joshua Schulman, too, is no exception. The novel under review is about how he overcomes the curse and discovers the hidden.

Just when it seems Josh couldn’t avoid his downward spiral, reminiscent of Ben Sanderson in Leaving Las Vegas with his addiction to drinking, he’s given a chance to put his life back in order. He accepts a teaching position at a boarding school in rural Iowa, but his appointment is based on deception. There Josh encounters a cast of characters and eccentric rituals. His addiction, his lies about his ex-wife and deception about his PhD lead him to a dilemma until he can’t take it anymore and ends up confessing everything to Natalie, a married woman, who feels a mutual attraction towards him. Natalie, Rubenfeld seems to suggest, has a moral spine and that becomes the catalyst for Josh’s own moral reckoning, which the author situates in direct clash with his addiction. Unbeknownst to Josh there’s another Josh within him, an inner dialogue ensues via cyberspace, triggering the collapse of the house of cards, an important development Josh can love anew. The novel ends on a positive note since Josh overcomes fear and allows self discovery. It’s not just the fear of losing his family and Heloise, his ancestors’ language or his beloved New York. There’s also a burden of being Jewish and persecuted, despite assimilation ( because of white skin) – like a curse. Only the possibility of love, a possibility (the warp zone?) one is not aware of unless one tries, can liberate one. That seems to be the central point of the novel.

There’s a hint early on that Joshua may be suffering from depression as Heloise begs him to take medication. There’s no clue whether he ever took medication. His resistance, thankfully, is not explained. There are therapy sessions which yield little to no result. It is possible that Josh’s addiction is one way to deal with depression, which his mother’s death has exacerbated. We find no discussion of it once Josh moves to Iowa, except one casual remark one-third of the way. Change of scenery can help fight depression sometimes for a short period of time, it cannot cure it completely. It’s also plausible that he does not have depression and he’s simply suffering from something called dissertation fright or something similar, which Heloise fails to understand. Whatever the malady, it cannot be easily cured. Running away might, just like his father and his brother did. I may be stretching a point here, but if we read along this bend of thought we cannot help but invoke the myth of the Wandering Jew. Could Mr. Rubenfeld be suggesting that the curse the modern (western) Wandering Jew carries is simply his presence among his fellow white Christian citizens, a presence which mocks them and reminds them of their history of brutality?

Despite being a novel that deals with serious issues plaguing American society, it gives the impression that one is reading a lighter text because the author uses humor so well. That’s partly because the humor embedded within the title The Eggplant Curse and the Warp Zone anchors the text. The characters the narrator seems to make fun of are never turned into buffoons, dehumanized but respected for their humanity. This allows the reader to have unwavering empathy with the central character.

There’s one area of the novel which, I believe, is a missed opportunity: the Palestine/Israel issue. I bring it up, not because a white author (Jewish or otherwise) touches on it by sending Josh’s brother to a kibbutz in Israel, but also because that freedom/space is not allowed to a writer like me with Muslim or non-western background without consequences. For example, Assaf Gavron’s brilliant novel, Hilltop, makes us evaluate serious issues when the protagonist goes to visit his brother turned religious living on a settlement in Occupied Territories. One of the book’s central points suggests that there’s very little difference whether one lives on a kibbutz or a settlement because when looked at from the victim’s point of view, land theft is land theft. Josh can afford to be oblivious to the issues of settler colonialism, the author cannot. Why the brother, for example, opts for a kibbutz and not a settlement? It was an opportunity for both the narrator, and the author, to place their liberalism under self scrutiny. Most novels have moments where the author could distance himself from his character(s). Call them moral moments. By avoiding to engage with the Palestine issue, Josh risks being seen as condoning the status quo, especially, after a respected organisation B’tselem, based in Israel, has finally decided to call Israel an apartheid state. Admittedly, this is an unfair burden for white American fiction writers to carry, but we all know that a novel is a heavy beast. Having said that, I truly enjoyed reading Mr. Rubenfeld’s crackling, witty, modern prose and spending time with fully alive characters. Finally, I wish Mr. Rubenfeld a wider audience for his thought provoking and entertaining novel, and more opportunities to make up for this missed opportunity.

About the reviewer: Moazzam Sheikh is the author of two collections of short stories. In 2017, he guest-edited Chicago Quarterly Review’s special issue on South Asian American Writers. He is a librarian at San Francisco Public Library and lives with his wife and two sons.