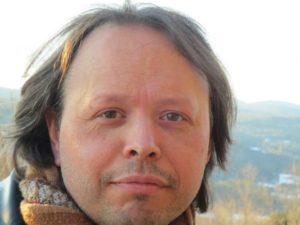 “The Authors of this Dream” is the first book in a series, “Edge of the Known.” Can you tell us about your protagonist, Brandon Chane? How much of yourself is in this character? How did you decide when to pull from your personal history as a musician instead of fictionalizing his experiences?

I always believed that I could never really be fulfilled in this world unless I uncovered my own voice as an artist and was able to reach people from that place. So that’s where my affinity with Brandon lies. The particulars of our respective journeys are very different – I’ve never been in a fistfight in my life, and Brandon (at least at the onset) throws his fists at the slightest provocation. But his underlying journey towards becoming a kind of spiritual messenger in a world that he always felt ostracized from is something that I’ve lived my own version of.

When I started sketching out the story in my mind, I knew I’d be reaching for some peak emotional points that, at least to some extent, reflected the epiphanies, insights and breakthroughs that I’ve reaped from my own inner journey. When it came time to fill in the details, though, I just tried to tune in and let Brandon speak for himself.

Saul Mason is another interesting character in this book. What can you tell us about him and his relationship with Brandon?

My conception of Saul began as a kind of wish-fulfilling fantasy. My personal spiritual odyssey has spanned some 30-odd years now, and I’ve worked with a lot of teachers along the way. I always left these relationships feeling disillusioned and unfulfilled because the framework within which these teachers worked felt too limiting and dogmatic. I wondered why no one I encountered ever worked from the perspective that we are each the creators of our experience. Now, I’ve spent my life developing as an artist and creator, not as a therapist, so Saul has become both a mouthpiece for my personal philosophy in that area and also as a model for how that kind of therapeutic approach could work – which is how he interacts with Brandon, always reminding him that his circumstances are the reflection of his thoughts, feelings and beliefs.

With Saul’s character, you introduce shamanism and metaphysical elements into your novel. How do these ideas impact your writing and character formation? Are these schools of thought important to you in your own life?

Leonard Cohen has a line is his song, Anthem: “There is a crack, a crack in everything; that’s how the light gets in.” That encapsulates the essence of shamanism, and it’s also an apt description of the artistic vocation in general. The wound obliges would-be healers to connect with the unseen world in order to regain spiritual equilibrium. Through his “crack,” his wound, Brandon touches upon an inner wellspring that exerts a healing effect on himself as well as the millions of people who hear him.

Saul’s worldview perhaps has to be described as “metaphysical,” but I don’t see it that way. I think his methodology is actually much more pragmatic than our culture’s prevalent belief systems, such as science and Christianity.

While writing this series, you read books about Jim Morrison of The Doors, guitarist Jimi Hendrix, Guns N’ Roses singer Axl Rose and Nirvana frontman Kurt Cobain. How did you incorporate this into “The Authors of this Dream?”

I’ve probably devoured 30 or 40 biographies about various musicians by this point. I wanted to make a living as a performing musician, once upon a time, and so I considered such reading to be “field research” in a sense. I was trying to learn as much as I could about my intended profession. Was there some reliable path to inspiration? How did various artists live with the hypersensitivity that so often seems to accompany vision? Is there a relationship between creativity and self-destruction?

As far as the musicians you mentioned go, Jimi Hendrix informed my idea of a musician as a kind of spiritual messenger, Jim Morrison and Axl Rose influenced my image of Brandon as someone who acts on raw impulse and emotion onstage, and Kurt Cobain inspired me with an example of how an artist, speaking for his or her self, can, in the process, spell out the hopes, fears and passions of a whole generation.

What does the music of the band in this series, Edge of the Known, sound like?

The band’s sound is deliberately left ambiguous because I don’t want to bind them to any specific era of music history. Wherever – and whenever – you are, they’re out there on that edge, reflecting it in their songs. Generally, all the band members are drawn to extremes: aggression, sadness, playfulness and joy, surrealism, and so on. The only musical terrain they tend to avoid is anything middle of the road.

Do you listen to music while you write?

Before, during and after! Music is a part of my life every day. Oftentimes there may be a certain song that captures an emotional or dramatic quality that I’m reaching for in a certain scene. The scene may take an hour to write, though, and the song may only be five minutes long, so I’ve created a lot of playlists that sustain certain moods throughout. I might instead opt to put that one song on repeat, too.

One of the underlying themes in this book is the relationship between violence and powerlessness. Can you elaborate on this and explain the importance of these themes in your work?

Violence of any kind is an eruption of emotional force that occurs when more constructive channels of expression and communication are blocked, or seem to be. Saul helps Brandon to recognize that his violent outbursts are closely entwined with a sense of powerlessness, his belief that he lives at the mercy of a reality that is thrust upon him. Brandon’s personal conundrum also serves as a microcosm for our state of worldwide strife. This series explores the idea of revolution. Many people hear that word and immediately associate it with pitting yourself against something. I suspect that part of the shift in consciousness that’s likely to occur within a lot of people in coming years will involve shedding the whole idea of reacting against anything. If you realize that you’re the creator of your life experience then there’s no need to react to circumstances because those circumstances are just reflecting the state of your inner mind.

You also discuss the concept of whether reality is thrust upon us rather than being created from within us. Where do you stand? Are people the victims of circumstance?

I first began consciously pursuing my own inner quest in my late teens. I’d grown up believing that my stepfather was my real father, and learning the truth about my situation provided the impetus for my spiritual search. I never achieved much growth and healing around this issue, though, until I realized I’d created the circumstance myself, and that I’d used it as motivation for finding my own answers when my upbringing didn’t provide me with a path to follow. My sense of unreality led me to discover my own personal definition of reality. Now, that’s one of countless experiences that eventually convinced me that we are indeed the creators of our experience and that the recognition of that fact is the surest way for us to free ourselves from any kind of limitation and suffering in our lives.

What does your book say about peoples’ tendency to worship the messenger (in this case, the rock star) but miss the message?

There aren’t a lot of voices within our culture that encourage us to trust our own inner wisdom, to turn inward and follow our own sense of direction. People sense their spiritual nature; they sense their own divinity, but many don’t know how to really own that, and so they project it onto politicians, sports heroes, movie stars and rock stars so that they can at least experience it at one remove.

An icon is basically someone who people measure themselves against in some way. This dynamic creates a real paradox for Edge of the Known. They seek success, and yet Brandon, particularly, is strongly influenced by Saul’s philosophy that each person is the creator of their reality. And so for him to be worshipped as a rock star essentially contradicts the message that he’s trying to convey in his songs.

Without giving too much away, what can readers expect from the rest of this series?

I’m really intrigued by the ways in which artistic inspiration can impact the rest of society – even sparking, in rare instances, a widespread cultural shift. The greater story arc explores this idea, even venturing into areas that many people normally associate with science fiction and fantasy. I believe that our future will involve a deeper and deeper awakening into the real magic of creation.