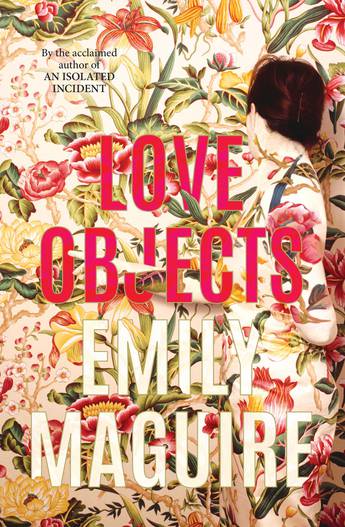 Nic is a character that catches the reader’s sympathy right from the start.  Perhaps it’s the way she notices everything around her: taking in the details of her walk home from work, from the telegraph pole posters to the discarded doll’s bonnet she finds in a park.  Or perhaps it’s the way she describes herself: pigeon-toes and “arse outgrowing its pants”.  She’s straight talking and charming, anthropomorphising everything, imagining her dolls suffocating, that hooks are lonely without things hooked on them, and that her toy crates need their serenity. In short, Nic has hoarding disorder, a fact that becomes clear the minute she walks through her door. What’s also clear is the tenderness with which Nic regards her things–how important each item is to her, and the way in which they represent something she wants to hold onto. Lena meets up for a weekly lunch session with her beloved and clever niece Lena, a Sydney University student. That is until she decides to make the hook happy and hang her found bonnet on it, and missteps.  Meanwhile Lena is flirting with a nice looking boy on campus who seems to be flirting back. From that relatively innocuous opening, a chain of events takes place, expanding outward into a situation that both draws Nic and Lena together and threatens to undo the careful life that both of them have created. Like a grand symphony, Love Objects begins small, with a few key notes in the lives of these two women, and continues to add additional thematic layers.

One of those layers is the family dynamic between Nic, Lena, and her brother Will, who, at a low ebb in his life, travels to Sydney to help out with Nic’s recovery. As Will arrives, complete with a comically painful toothache, the complex threads of the relationships between siblings, parent and child, and the ancillary characters who float in and out of the orbit of this family is beautifully handed, with the narrative slipping in and out of Nic, Lena and Will’s point of view, and moving almost imperceptibly between the characters’ perception, dialogue and action.  The pace never falters, and the growing tension drives the narrative quickly towards the book’s satisfying denouement, even as it reveals the characters’ histories, pathologies, and the connections between their relationships and the world around around them.

Other things are happening throughout the book. One of the most powerful is Lena’s painful awakening to the misogyny, institutionalised sexism and classism that surrounds her, a theme that remains unfortunately topical. This is a story about the toxic and dangerously predatory underpinnings of the privileged college life Lena encounters at the uni. The perpetrators don’t even know they are the ‘bad guys’, even though the crimes they commit, and have clearly been committing for some time, are illegal and potentially deadly. Maguire’s feminism is as subtle as it is powerful, particular as reader sympathies shift in the work.

Another theme is global warming, as the story is set during the 2019 Australian bushfire season (“Black Summer”). The air is constantly full of smoke, irritating Lena’s eyes and making Nic cough. A clear parallel is made between the environmental degradation that lead to the rampant bushfire season, and the toxic masculinity that oppresses Lena is made, linking up the whole notion of privilege and abuse:

All over the world things meant to stay buried were being uncovered because people had forgotten they were part of the world even as they couldn’t stop devouring it.  In Russia, a long-frozen reindeer carcass suddenly thawed and the nineteenth-century anthrax that had killed it took the opportunity to infect a twenty-first century child and not a single flight was cancelled, not a single carbon-spewing factory closed. (162)

Josh has no sense of his own privilege or the casual way he is able to cause harm, but his ease is in sharp contrast to the way in which Lena treats herself, and her body–the whole notion of what it means to be a woman in the world is played off against his entitlement:

Josh was making fast work of his burger. He didn’t look like a greedy pig, though. He looked like a man with a well-earns appetite. A man in a hurry, but not so much he couldn’t enjoy his food. He was near naked, too, and not self-conscious about it. Not self-conscious about anything. In his skin and in this room and everywhere else. What must it be like, to be so at ease? (214)

The damage that Lena, Will and Nic sustain in this book is often tortuous to read about, not least because it’s so common, and proceeds along lines that are structural, predictable, and shockingly ordinary. The systems that give rise to the focus crime in this book are the same systems that give rise to the kind of abuses we’re seeing constantly in the news: at the level of government, at universities, in our schools, and in corporations everywhere.

Though Love Objects shines a bright light on everyday misogyny, institutionalised sexism and classism, it is not the least bit polemical. Love Objects is as engaging a novel as I’ve read, full of beauty – some of it very subtle – including the deep love between the main characters, and a rich sense of what remains when you strip away judgement and artifice, moving towards an almost exuberant affirmation of life and love. It never objectifies Lena or Nic even when many of the lesser characters in the book do so. Nor does it make the monsters one-dimensional or in some way exceptional from the world they live in. These monsters are as trapped in their in their roles as Lena, Will and Nic, maybe more so, as they have the privilege of being blind to their own ugliness. Love Objects is an important, beautifully written, and deeply moving novel that covers a lot of ground without ever feeling heavy. It’s topics remain critically pertinent, and its characters deeply engaging and believable.

← A review of Foxline by Chris Mansell
New giveaway! →