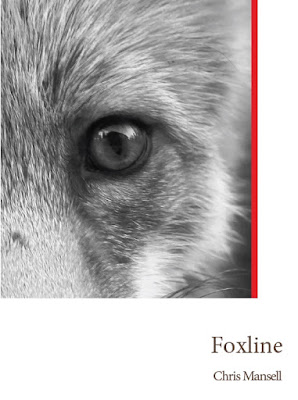 Foxline was inspired by a fence line of dead foxes scalped and strung up near Caslemaine that Chris Mansell happened upon. It might seem like a gruesome prompt, but the collection of poems that grew out of that is both elemental and universal, moving in and out of the perception of fox and hunter to create a vision that feels entirely relevant to a modern reader. With sensual detail, Mansell gives voice to the voiceless and creates an exploration of the human condition, our relationship with one another and the natural world we are part of.

The fox in this instance is both prey and predator while the hunter, as guardian, is predator only, and in that sense seems a less complex character, though he develops through the work. The fox’s plight is foretold: the gun will always kill the fox, and she is ennobled by her grace in the face of the inevitable. Mansell moves smoothly between the concrete: the fox, with its beautiful fur and natural self-possession, and the metaphorical: fox as woman, as nature, as the Earth itself. The hunter is depicted clearly as male, frightened, retributive, but also slightly aroused by the role, representing mankind and the ruinous progression of capitalism as he maintains the status-quo like a corrupt police officer:

the calm knife
the expedient gun
the thrill of competence (“The Foxline”, “v”)

The format and structure of Foxline varies between dialogue and monologue as the voices work together, prey and predator moving almost conspiratorially. The poetry is written in tercets or three line stanzas, creating the delicate, minimalist quality of a haiku. At times the tone is calm and self-reflective, and at other times, ferocious, powerful and angry:

There is a strong sense of the collective in all of the fox sequences, with the fox almost always referring to herself as “we”:

on this day
we are legend
quick and wise and foxy

The farmer on the other hand, is always solitary, using “I” to explain himself:

In addition to the two voices of the fox and the hunter, there is also a running commentator, with small asides and the occasional reporter-like question:

Q:How much fox is in the blood?
A: In mine, all of it. All the blood
And all the generations are foxgeld. (“The Foxline – iii, FAQ”)

This voice provides a structural and thematic contrast to the other two, explaining what is already clear in the text with wryness that borders on humour:  “The fox is angry/to see her kin/strung up/and dead.” (41). This echoing and playing of the voices against one another creates a story in itself, albeit one of tone, music, and contrast rather than semantics.  Rhythm and sound is important, and though the tercets are unrhymed, the poems are sonically beautiful, particularly when read aloud. Every poem is alliterative (“fearful throbbing thunder gods”), unpunctuated and written with an innate iambic flow that uses enjambment to keep the work moving quickly from stanza to stanza, almost mimicking the light touch of a fox’s run.

The fox and hunter are caught up in the roles they inhabit – the killing and the evading, but the poetry hints at something more – a space of understanding and collective imagining as the work focuses into the scene and then moves outwards towards visual and theoretical abstraction, for example, the shapes of fences “rhomboids across the grasslands” or the heroine mythologies that the anthropomorphic fox imagines:

Foxline is an exquisite, bold work of poetry, with each poem taking on multiple meanings and holding back just the right amount at the point of denouement to allow space for the reader to pause, think, and engage.  Mansell’s writing is masterly in its restraint, and beautifully written throughout. Though Flying Island’s Pocket Poetry series uses a tagline of “minor works,” Foxline is anything but. The only thing minor about it is the price tag. As with all of the poems in the Pocket Poets series, copies are limited. I wouldn’t delay in obtaining this one.

← A review of Mostly Sonnets: Formal Poetry in an Informal World by James A Tweedie
A review of Love Objects by Emily Maguire →