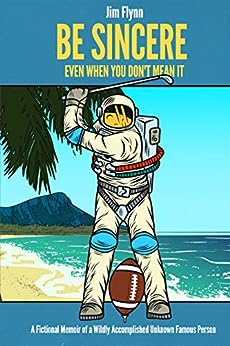 In his 1972 book Sincerity and Authenticity, the critic Lionel Trilling wrote about the distinction between being sincere and being authentic. It’s certainly possible to be “sincere” about almost anything, whether it is true or not. To be “authentic” is to strive for more universal truth that distinguishes itself from sentiment, current trends, or the influence of others. Our belief systems can be easily influenced by what we have been taught from birth and what we see modeled around us in the world. And one’s “world” can be very different from someone else’s experience.

In Jim Flynn’s novel Be Sincere Even When You don’t Mean It: The Memoirs of Jimmy Sizemore, his main character, whom we might see as Jim Flynn’s alter ego, knows the difference. We see him play along with people in a variety of situations, but he is never not true to himself. The fact that Sizemore is abundantly wealthy with more options than the average person does not diminish the messages he delivers. It simply gives Flynn more leeway to explore a variety of experiences for Sizemore that help illustrate a number of very astute observations about life and people in general, and with more than a passing nod to classic elitist behaviors. He does this more directly with asides he calls “Life Tips” that are inserted throughout the book. Basically, he tells us that life is just too short to compromise yourself.

Beyond the personal life tips, there are the acerbic, satirical, and often hilariously funny Sizemore situations and anecdotes that give deep insights into human nature and, in many cases, uniquely American institutions. Particularly in today’s climate, these warrant intense scrutiny and re-evaluation. Flynn accomplishes this with adroit observations and cutting-edge wit about behaviors and consequences that are ingrained in the American psyche and landscape. Flynn’s humor is excavated from a deep, intellectual acumen that serves to substantiate the validity of his points even while we’re laughing our asses off. There are no cheap shots here but authentic perceptions and keen, unrelenting examinations of some of our most cherished and supposedly sacred establishments and convictions.

First, given Sizemore’s wealth, he takes aim at the emotionally distant, superficial characters of his parents and the upper strata in which these people live within an alternate universe. Like so many of today’s wealthiest citizens, they are so removed from the daily life of most people that they could be poster children for “Narcissists Today,” if such a publication existed. And Sizemore is ruthless in telling you exactly who they are and how they behave. More subtly, we see how it has affected his own character. His background is what enables him to act bravely on his own behalf yet keeps him somewhat distant from others. Essentially, it renders him a brilliant loner, disconnected and often lacking in compassion. What he lacks in one-on-one interactions, he compensates for by donating much of his wealth to charities. However, given the general state of human nature, it’s fairly difficult to disagree with most of his assessments and his reactions to others. While the majority of us capitulate to others’ bad behaviors or expectations in order to “keep the peace,” or out of fear of loneliness or reprisals, Sizemore doesn’t allow himself to be held hostage by such emotional blackmail or sanctioned norms. This enables him to see things more realistically and, well, authentically. It’s true that being incredibly wealthy offers a buffer from the world and those he snubs. Still, we can all value ourselves better regardless of our financial situation. In most cases, it is our emotional ties and familiarity to others that sustains our willingness to compromise ourselves much more so than our wallets.

Sizemore’s great intellectual abilities and achievements land him in a variety of situations. He graduates from the best schools with the highest degrees as a math whiz and astrophysicist. Various circumstances and quirks of fate position him as a player with the NFL, in the Super Bowl, as an All-American baseball player, on a space mission as a “citizen” astronaut, as a participant in The Masters Tournament (golf is a passion for him), as a contender in various Ironman competitions, and joining in a number of other extraordinary experiences. Sizemore tells us from the start of the story that he is not a “normal person.” He’s never been married and is not close to his parents or a brother, his only sibling. He doesn’t drink much and basically lives a very clean lifestyle. Despite his extraordinary life, his desires are quite simple. As he states, “If you told me I was going to die in an hour, I’d like to spend the time chipping,” a reference to his beloved golf game.

Flynn’s attention to detail in describing Sizemore’s various meetings and situations is what makes the story so believable and hilarious. Always the gentleman (“I’d learned through osmosis from my father that you always compliment somebody before you turn them down”), he gets what he wants with a smile. It’s a lesson in how to conduct yourself in the most difficult situations with the most persuasive people. There are very few revered institutions and American ideals that are left unscathed by Flynn, and rightfully so. His humor is often reminiscent of Woody Allen or even George Carlin, the former being less offensive and the latter not giving a damn how incisive or cutting—but very accurate. Flynn strikes a great balance between the two.

For Sizemore, the educated talks he gives around the country most often feel like he’s “preaching to the choir.” As he states, “The people who really need to know a little something are busy watching UFC Octagon fighting and driving pick-up trucks with decals of little boys representing Fords pissing on Chevys, or Chevys pissing on Dodge Rams, or Dodge Rams pissing on Fords.  There are other combinations, but you’ve got to admit the Decal Boy always looks ignorant and proud of it. Is this what they mean when they talk about American Exceptionalism?”

While we’re listening to Sizemore discourse so knowledgably on a variety of subjects, we realize the full extent of Flynn’s vast intellectual acumen that extends to a variety of areas. No subject escapes his incisive dissections. This is part of what makes this book so enjoyable. It’s not only funny and entertaining, it’s incredibly informative and educational. Personally, I found his character’s discussions on science particularly enlightening, mostly because these are areas in which I’ve always felt weakest. The way in which Jimmy Sizemore explains things does not make me glaze over like I did in Mr. Schachter’s Earth Science class. This book contains multiple lesson plans that go down as easily as a cold drink on a hot day. I can’t help thinking that if we took this approach to teaching, there might be fewer dropouts and more critical thinkers in American society. That might not serve the ruling body, however. Sizemore realizes this early on, which is why he carves out his own path in life and basically keeps to himself. As Sizemore states at the end of one chapter: “This concludes your primer into Science, and I promise not to mention the Pissing Little Boy Decals anymore. If you are interested in further reading, Stephen Hawking wrote a later book called A Briefer History of Time that kind of dumbs down the first book, and you might make it halfway through. Or you could attend one of my lectures, complete with excellent graphics, coming soon to a city near you.”

If you’re smart (or want to become even smarter), get to a computer near you and grab a copy. Alternatively, I also listened to the book on Audible, the audiobooks website. Gary Williams does an excellent job as narrator. In any event, I highly recommend Be Sincere Even When You don’t Mean It. And I do mean it…sincerely but also as an authentic experience.

About the reviewer: Karen Corinne Herceg writes poetry, prose, reviews and essays.  Her latest book is Out From Calaboose by Nirala Publications (2017).  She lives in France.

← Questions for Craig W. Gill, Director of the University Press of Mississippi, with Congratulations on the press’s 50th anniversary
A review of The Hate U Give by Angie Thomas →