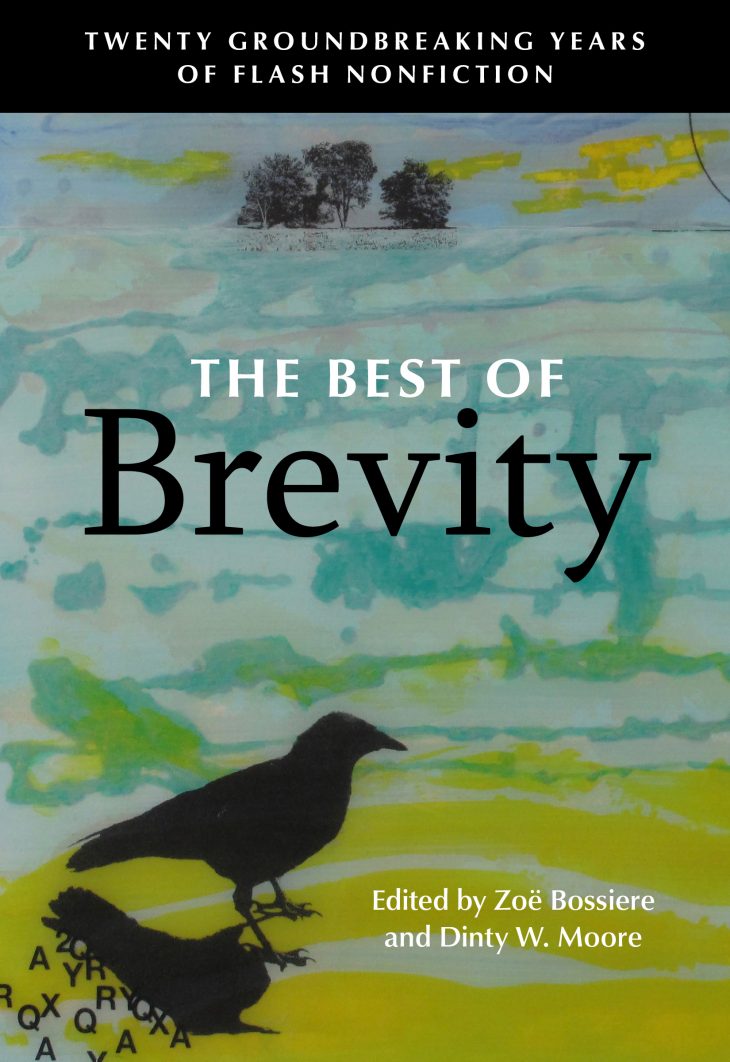 Founded in 1997 by Dinty W. Moore, in the early days of the internet,  Brevity has been a pioneer in the promotion of “flash nonfiction,” or “flash essays,” in an online venue.  As the title suggests, this compilation represents a “Greatest Hits” anthology of the magazine, in a print collection, as selected by Moore and  his colleague, Zoë Bossiere, editor-at-large for Brevity.  Published by Rose Metal Press, which specializes in hybrid genres, The Best of Brevity is a teaching guide as well as a volume of purely “pleasure reading.” It’s something of a companion to Rose Metal Press’s “Field Guide Series,” which includes The Rose Metal Press Field Guide to Writing Flash Nonfiction: Advice and Essential Exercises from Respected Writers, Editors and Teachers, itself edited by Dinty Moore.

Brevity’s guidelines specify works of 750 words or fewer, though some, like “Transgender Day of Remembrance: A Found Essay,” by Torrey Peters, which appeared in Issue 49 in 2015, range a bit longer. It’s a “guideline,” suggesting the “flash” aspect of the writing: a lightning strike of meaning and perspective in a brief piece of writing. Other pieces, like Kristen Radtke’s 2012 “Perdition,” a nine-frame comic strip, and Sam Stokley’s 2016 “How to Discuss Race as a White Person,” a hilarious and provocative text consisting only of footnotes (“2. A Peruvian-American…9. See: Strange Fruit…”) at the bottom of a blank page, make their points with even fewer words.

Following the 84 essays themselves, The Best of Brevity includes sections on teaching flash nonfiction in a classroom and “An Alternate Table of Contents by Subject and Form.” Subjects include nineteen topics, ranging from “Aging,” “Animals,” “Coming of Age,” “Disability and Illness” and “Gender” to “Grief and Loss,” “LGBTQIA+ Perspectives,” “Race and Ethnicity,” “Religion” and “Women’s Experience,” which suggests the contemporary focus of the themes that are addressed.

The Forms include “Braided Essay,” “Fragmented or Sectioned Essay,” “Numbered or List Essay,” “Lyric Essay,” “Micro Essay,” “Researched Essay” and “Hermit Crab Essay,” a term coined by Brenda Miller and Suzanne Paola in their 2003 collection, Tell It Slant, which is likewise a guide to creative nonfiction. The term refers to essays written in non-traditional forms. (Miller’s 2017 “The Shape of Emptiness,” cross-referenced under “Loss and Grief” and “Teaching,” is included in The Best of Brevity.)

“Hairy Credentials,” Nicole Cyrus’s clever take on African-American hair in the form of a resumé, is one such “Hermit Crab,” with familiar subtitles like “Areas of Expertise,” “Special Skills” “Presentations and Workshops,” and “Honors and Awards” with bullet-points under each category. “Nicole is a professional woman who wants to rock her Afro in business settings and still command respect,” the resume begins under the “Summary of Qualifications” heading, the thesis statement.  Under the subtitle, “Accomplishments,” one of the bullet-points reads, “Taught black women inside and outside the company how to explain dramatic transformations in their appearance – such as haircuts, use of wigs and hair weaves….” Cyrus deftly makes her point.  She drives it home with the concluding subheading, “Affiliations: Member, Black Professional Women Tired of Natural Hair Bias.”

Among the most poignant essays is Julie Hakim Azzam’s 2016 “How to Erase an Arab,” about a Palestinian girl’s family trying to fit in in the United States and still affirm its nationality, kind of a losing battle. The horrors of violence in the middle east are hammered home by the section headlines, all taken from the New York Times. “Israeli General Says Mission is to Smash P.L.O. in Beirut”; “Car Bomb in West Beirut Street Leaves 25 Dead and 180 Injured”; “Wrecked by Years of Civil War, Beirut is Rising from the Ashes.” Another is Krys Malcolm Belc’s “When a 17-Year-Old Checkout Clerk in Small Town Michigan Hits on Me, I Think about the Girl I Loved at 17,” a heartbreaking essay about a transgender person remembering himself, in a former life, on the subway train in New York, as a girl who wanted to kiss the girl she’s riding the train with. It’s all told in the context of the early twentieth century engineering marvel that was the PATH train from Hoboken to Manhattan, like a metaphor for the engineering feat that transgender identity entails.

I have to restrain myself from simply summarizing some these marvelous 84 essays culled from over two decades of publishing, but as with all flash, fiction as well as nonfiction, it’s the gem-like brilliance of the individual pieces that stands out. In her opening essay, Bossiere singles out Josey Foo’s half-page “So Little” as the quintessential flash essay, one, as a teacher, she’s turned to again and again for student assignments. It’s really just one sentence: “She moved from the chair to the window.” The heavy-lifting occurs in a long parenthetical aside that comes between the last “w” in “window” and the period, which concludes, “Maybe if she flung her eyes to the right and her mouth to the left she might be able to say it all.”

These 84 flash essays say plenty about our world in their short, vivid expressions. The Best of Brevity is a great place for writers – and readers – to learn the value of concision. Less is more, indeed.