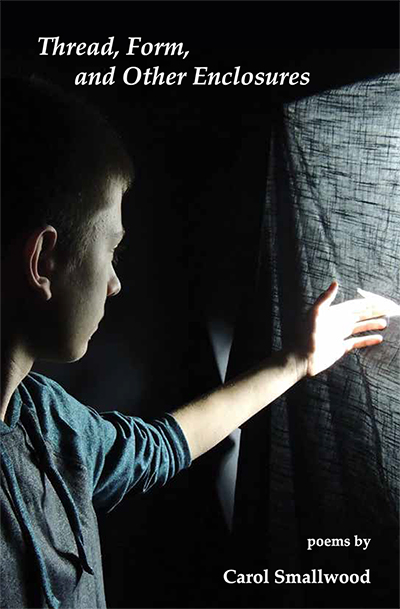 Poet Carol Smallwood assures us once again in her latest poetry collection, Thread, Form, and Other Enclosures that we are in the hands of an accomplished poet, who deftly uses the very form of her poems as enclosures to explore the nuances of structure within our culture, a structure, she reminds us, that may be as invisible as gravity itself, but no less powerful in its impact. This collection of over seventy poems explores the boundaries that bring us together and keep us apart: the threads, the forms, and the enclosures of our lives. Smallwood’s subjects are wide ranging, but the focus on women’s experiences interconnects throughout the collection.

Smallwood explores the relationships women traditionally have had to enclosures living as women in a culture that has silenced women’s voices and devalued their creative work, specifically the tools of needle and thread, the weaving of women’s art. As she explores connections and disconnections, she will intertwine science and myth, the personal and the public in ways that will both surprise and satisfy us.

Smallwood uses the strictly defined poetic forms of the pantoum, the triolet, the villanelle, and the rondeau along with free verse to great effect following Auden’s notions of a “form looking for a subject and a subject looking for a form.” Smallwood uses these closely defined forms as poetic enclosures for ideas, using a tight structure to force us to see what we have not seen before, subtle changes in meaning coming into focus as words repeat, context shifts, and we focus again on the same words, but now read their meaning anew. In her poem “The Universe” we begin with the security of making patchwork quilts in the emptiness of a “universe with no edge or center” but move finally to a “universe with no edge or center” where the speaker recognizes death as an eventuality as everyone must, but she reminds us that women create meaning over and over as they “cut up pieces to sew with needle and thread” because as the speaker’s grandmother tells us, “You are not lonely when you sew.”

In other poems Smallwood will lay unexpected connections before us. In her poem  “A Quartet” she will celebrate the “economy in circles,” circles present in the seemingly vast and unrestricted boundaries of the universe and within women: circles being  “the popular choice of planets/revolving moons, and womb.” Circles live in the rhythm of seasons and geology and history of life on earth.

In another thread, Smallwood recalls Greek mythology recalling images that remind us of the importance of women deities such as the Three Fates who weave the fabric of life, determine the length of our thread, and decide when it will be cut. Mythology has granted such women enormous power over our lives. Smallwood combines this with the elevation in Greek mythology of women’s knowledge of weaving and sewing, which has been silenced or denigrated in our present day culture. Arachne’s story, well-known in mythology, speaks of a woman admired by humans and gods for her great skill as a weaver.  She will compete with the goddess Athena, displaying the dangers of human pride in breaking the boundary between mortals and gods. Arachne’s challenge to the gods, her attempts to escape her mortal enclosure, will be punished by her transformation into a spider, and yet the image of the spider, connecting to the myth will make satisfying reappearances throughout the collection, the spider as weaver forever present on earth.

In yet another myth, we are reminded of the labyrinth created by Daedalus for King Minos. Minos’ daughter Ariadne was put in charge of the labyrinth and is thus often associated with mazes. When Theseus, the hero of ancient legend,  sought to free the boys and girls sacrificed to the Minotaur. Theseus, the famous hero, will succeed only when he receives help from Ariadne, who will offer him not only a sword, but also the large ball of thread.  The ball of thread will be invaluable in leaving a trail by which Theseus will find his way out of the labyrinth, thus, saving the children from the Minotaur. He will need both sword and thread to survive. However, when we recall Theseus, we remember him as the hero of the story, ignoring or diminishing the role of the female, the goddess Ariadne, without whose help of the sword and the thread, each the traditional tool of men and women respectively, it is unlikely he would have succeeded in finding his way out of the labyrinth.  Once again, Smallwood returns to mythology for the presence of the power of women’s knowledge and the importance of women’s art traditionally connected to thread. And later, without missing a beat, Smallwood will have us reconsider the power and importance of threading as she takes us to the intensely personal, as she speaks of threading the subclavian vein as part of her chemotherapy, part of her cancer treatment, creating interconnections, crossing boundaries and erasing enclosures between her poems.

In addition to reminding us of the strength and importance of women in Greek myths, Smallwood has us consider the voices of women in literature that have been silenced. She searches through literature anthologies as one might divine the earth for life-giving water, seeking the writings of women. She will leave her pursuit unsatisfied, the thirst for such writings unquenched, with the collections instead filled mostly with the words of men using “man-made” words.

Smallwood explores the enclosures that hold knowledge in the academic world. She will return to the connection to myth reminding us of Pandora who opens the dreaded box, letting all the evils of the world escape with only hope remaining in the box. And yet, while it is Pandora who has opened the box, it will be poet Emily Dickinson, who will offer humankind a balm with her beautiful words, “Hope is a thing with feathers.”

Smallwood will find the misogynist professor teaching history with his offer of the “blonde visualizer” for the male students in the class, but she will also find the woman trapped in the yellow wallpaper in Charlotte Perkins Gilman’s work. Smallwood moves with dexterity from the trapped woman, a character in The Yellow Wallpaper, to a swift connection with the personal, revealing her sense of entrapment in her own marriage, a husband who called her “little girl” enforcing another kind of enclosure.

While the collection includes moments of humor, there are also

the emotional poems of Smallwood’s struggle with cancer. In the ultrasound room, waiting to have blood drawn, in her poem “Matter of Rowing” Smallwood  acknowledges an unexpected blessing for humans, like rowers who row backwards, in not being able to see what is ahead. We find that we, ourselves, may be blessed as well by not knowing exactly what lies ahead.

Overall, the collection has the feel of sharing an afternoon with a friend, well-read and knowledgeable, a friend who can speak of her curiosity related to myriad aspects of life including such wide-ranging subjects as the latest theories of the universe or the history of jeans or Claire’s stiletto heels in the television series House of Cards.  Throughout her collection Smallwood offers a voice passionate about letting other women’s voices be heard.

It is a collection to be read again and again, as each reading offers new ways of seeing and thinking, threads, forms, and other the enclosures appearing before us,  evolving, changing shape and ultimately presenting us with new insights. Her poem, “ A Brief Look” included in the Afterward, reminding us that “beauty comes at ordinary moments full grown, unexpected/and leaves us gasping.” We might say the same of Carol Smallwood’s poetry collection.

About the reviewer: Denise David, Ph.D. is the author of the recently published poetry collection Against Forgetting: War, Love, and After War, Shanti Arts Press, May 2020.