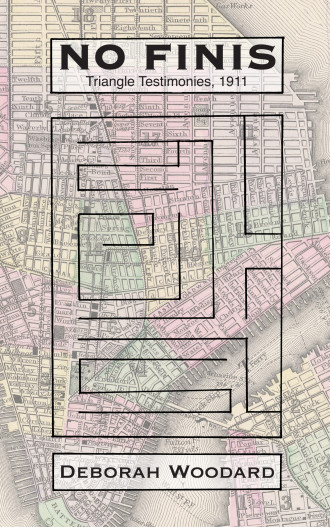 Poetry can reveal the raw tenderness of people who have experienced terror. Deborah Woodard’s collection, No Finis, does this for workers who were part of Manhattan’s 1911 Triangle Shirtwaist Factory fire. While we may (or may not) have learned of this fire in our history lessons, it shaped labor laws in the United States. Though the reforms have not been perfect, we can thank this tragedy for stricter building codes and better working conditions. But often, we take the obvious stairwell or emergency exit for granted. Our knowledge of the fire may not open us to the empathy and gratitude that such terror deserves. While we may understand this fire as a historic moment, Woodard compels us to remember it as a failure of our legal system—of the 148 people who were killed in the fire, and how the building’s owners, Max Blank and Isaac Harris, were tried for the death of only one employee.

Woodard does not write about this tragedy without an accompanying warning. While she focuses on the 1911 fire, she prefaces the collection with a quote from Xu Lizhi, a Chinese poet and Foxconn worker who took his own life in 2014. The quote, translated by Friends of Nao, reads:

A screw fell to the ground
In this dark night of overtime
Plunging vertically, lightly clinking
It won’t attract anyone’s attention
Just like last time
On a night like this
When someone plunged to the ground

No Finis does not merely memorialize a US tragedy, but ask readers to remember that many people are still not protected from the greed of their employers. Woodward’s work is another dissent, another protest in favor of life, so that such tragedies will stop being repeated.

This is the preface to her book. It is a force, and her book itself hasn’t (fully) begun. The book itself is a hybrid of testimonies and lines of poetry, and is based on the original transcript of the trial, The People of New York v. Isaac Harris and Max Blank. If you’re not familiar with the trail, as I wasn’t, Woodard offers a basic history so that you can fully appreciate what was lost, and what many have gained. Her writing is accompanied by John Burgess’ drawings, which represent diagrams that witnesses used to explain their impossible escape from the burning building, and why there were so few survivors. As you read, you learn that these diagrams were often used against the witnesses, some who were even asked to answer questions when they were presented upside-down to the people on trial.

Woodard’s choice to use the transcript offers no place—no money and no legal system—for the defendants to hide. Max Blank, Isaac Harris, and their Defense Attorney Max Steur reveal their characters, and the character of this country, though their words. Their criminal tactics used to remain unaccountable are in plain sight again, nearly one hundred years after their original trial.

Woodard’s sections are simultaneously beautiful and prosaic, terrifying and enraging. The workers are mostly women, many immigrants who spoke little English yet were still forced to testify in English, despite there being an available translator. The women’s conditions, both in the workspace and also as humans, are on full display in the courtroom, and Woodard opens the door for readers to understand the workers positions.

The excerpt “Mr. Steur and Ethel Monick” highlights the power structures Ethel Monick and other workers had to navigate both daily and in this particular court room.

…[Mr. Steur] You were not any stronger that day, were you?[Ethel Monick] I don’t know.

[S] Have it any way you like. It is your way of remembering
that Mr. Harris and Mr. Blanck used to spend but five minutes a day on the ninth floor?

[S] You don’t mean to say that you were afraid of these two men, do you?

[E] Not exactly afraid. You know they are—I was nothing to them, you know, because I was a working girl.

[E] Well when a girl don’t do something right she gets discharged. That is why I did not talk to them.

[S] You getting your pay has nothing to do with this. That will be all.
⎯⎯⎯

I want to buy a music box, and then a phonograph.

While this excerpt does not expose how language barriers invited cruelties and manipulations against specific workers, the simple disdain and disregard for all workers is on full display. There were many tactics used to silence them, and if simply refusing to listen to their testimonies wasn’t effective enough, belittling them while on trial was permissible.

No Finis is a tribute to the workers who were never given justice. Though too late for these workers, it amplifies the survivors’ voices beyond New York City, beyond the United States.

No Finis also serves as a question. We cannot believe these types of conditions are extinct and that entrapment hasn’t evolved. What then, are we to do to protect each other, even when there are language barriers, geographical barriers, cultural differences?

The “…fire was swiftly inscribed upon the city’s collective consciousness in multiple ways: … the laying out of the mangled bodies, sometimes by the same policemen who had beaten the girls on the strike lines; the arrival of the coffins…”

No Finis is a tribute to the workers who were never given justice. It amplifies the survivors’ voices beyond New York City, beyond the United States, and into the twenty-first century.

This book also serves as a question. We cannot believe these types of conditions are extinct and that entrapment hasn’t evolved. The “…fire was swiftly inscribed upon the city’s collective consciousness in multiple ways: … the laying out of the mangled bodies, sometimes by the same policemen who had beaten the girls on the strike lines; the arrival of the coffins…”

No Finis does not remind us simply about an event in time, but instead about the collective issue of exploitation. It reminds us to protect each other—across language barriers, geographical barriers, personal and cultural differences.

About the reviewer: Genevieve Pfeiffer is a poet, herbalist, and teacher. She is the Assistant Director at Anomaly and hopes the pandemic will ease so she can host the summer reading series in a beautiful NYC community garden (if so, join us!). Her work is forthcoming or has been published in Frost Meadow Review, Birdcoat Quartlerly, Juked, Quail Bell Magazine, The Write Room, and others. She oscillates between NYC and the mountains, and you can find her where there are trees.  She blogs about outdoor wanderings, herbalism, and bioregional health at: https://medium.com/@GenevieveJeanne