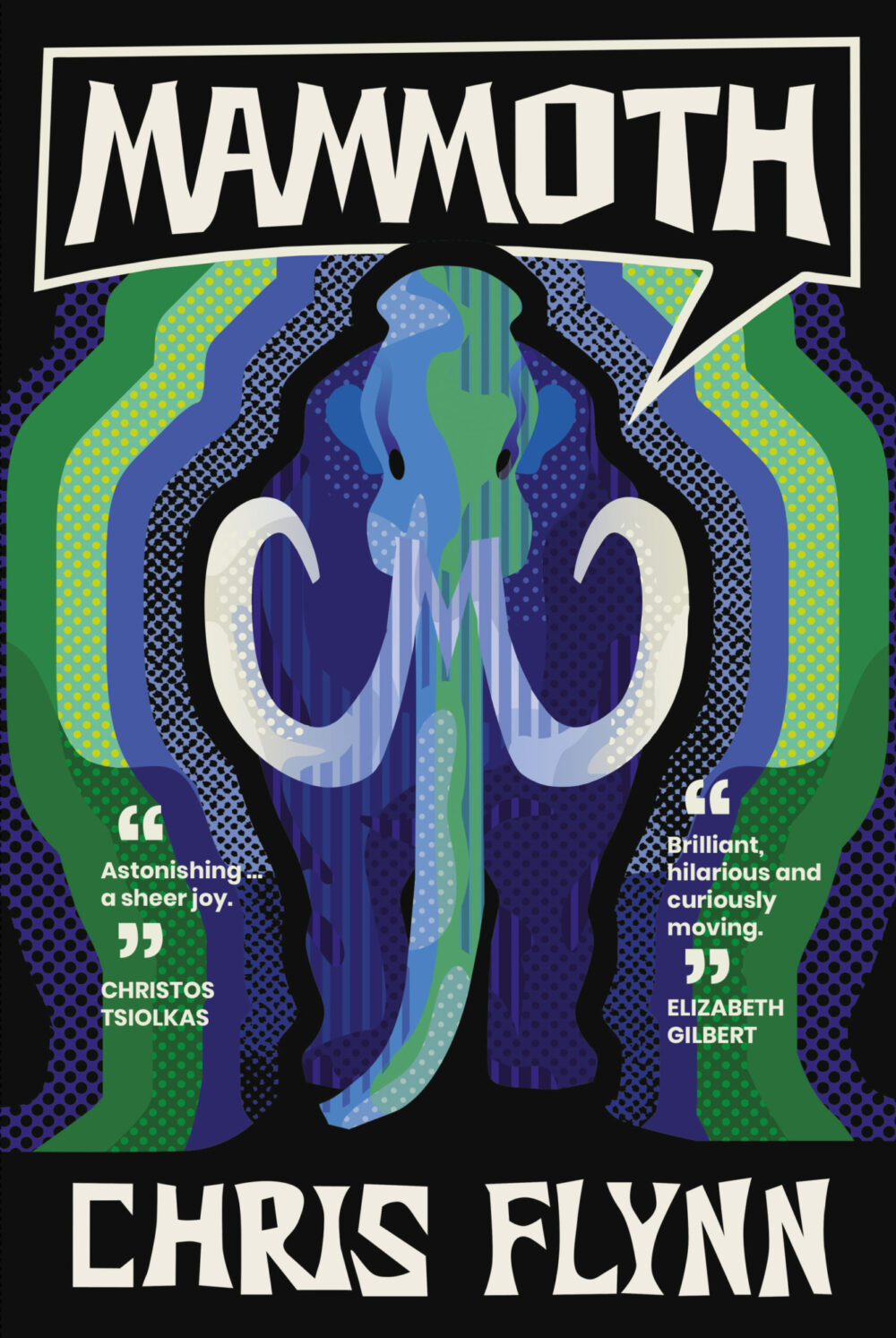 Mammut americanum, aka Mastodon, aka “woolly hellyphant”, became extinct some thirteen thousand years ago as part of a mass extinction of Pleistocene megafauna. One of the more common theories about why Mammut American became extinct is that human hunters, particularly a prehistoric Paleoamerican culture known as the “Clovis” for their pointed stone tools, hunted the animal into extinction. Mammoth is primarily narrated by the bones of Mammut americanum, affectionately known as “Mammut” by the bones of “Tyrannosaurus bataar” or “T.bataar”, a sixty-seven million year old relative of T.rex.  The year is 2007, and Mammut and T.bataar are in the backroom of a Natural History Auction in Manhattan awaiting an auction the next day. The two of them, along with Pterodactylus antiquus from Bavaria, an Egyptian mummy hand from the fifth pharaoh of the Eighteenth Dynasty of Egypt named Hatshepsut, and a prehistoric penguin known as Palaeospheniscus patagonicus or Palaeo for short.  Each of these characters have compelling stories, and their interactions are often very funny, but mostly Mammoth is Mammut’s story, which charts a series of interactions between Mammut and the world of the human.

The character of Mammut is a rich and beautifully depicted, particularly as narrated in the plummy tones of Rupert Degas. The tale winds its way though the centuries, tracing his interactions with Clovis and death in the Pleistocene, and the subsequent unearthing of his bones in 1801 by Charles Willson Peale, where he was brought to Peale’s museum of natural history and portraiture. At the studio he meets Charles’ son, Rembrandt Peale, the son of Charles, and Moses Williams, the son of emancipated slaves who grew up with Rembrandt.  They restored the skeleton and put it on display at the museum, where it attracted enough attention for the boys to take the bones on a European tour.  In spite of T.bataar’s ribbing, Mammut’s story is engaging enough to keep the narrative moving. There are many thematic threads that are beautifully woven through the story.  One of the most pervasive is the impact of man’s greed and how it has played out throughout history.  The story moves from the Pleistocene  through Napoleon’s France, Nazi Germany, the Irish insurrection, and other key events in history charting a series of interactions between Mammut and the world of the human, and shining a light on Slavery and racism, appropriation, colonialism, and global warming, highlighting the hominid’s ongoing lack of self-control and dangerous pursuit of power:

What great men they were! Enslaving and slaughtering our sisters and brothers, perhaps our descendants. What a boon man is to the world, helpfully clearing away its original inhabitants to make room for their grubby dwellings and mewling spawn.

You really have to hand it to them – they’ve taken a pristine wilderness that spanned the globe and brought it to heel with their concrete and firearms and technology. For this, they must be congratulated. Without their intervention, the world would be little more than a ramshackle, overgrown Arcadia.

Though the story tackles tough issues, it’s not sombre. The fossils and their interactions are surprisingly fresh and modern, with each individual voice providing enough character to hold its own (again, Rupert Degas shines here and brings out all of the voices so well I had to check to see if it were a full cast rather than one person reading the story on the audio). T.bataar is particularly fun, connecting the characters and their stories with a funky wit that continues to offset the somewhat lofty voice of Mammut with cheeky sass:

Look, I’ll tell you what. I’ll cancel all my appointments and inform my assistant to hold my calls. Impart your wisdom upon me, O great Mammut of the steppe. (10)

A sub-story in the book is the story of the young Irish revolutionary Caoimhe O’Neill, whose arc I won’t spoil here by summarising, though she does take centre stage for a while in the second part of the story, which moves through Ireland and the ill-fated Irish insurrection with Robert Emmet, and then the US where Caoimhe meets up with her brother Conchobhar in order to try and make a new life. Mammut is with them the whole way, and becomes quite enamoured with Caoimhe, narrating her adventures as he perceives them, a tagalong, his consciousness shared between the bones back home, and the tusk in her pocket.

Most of the human characters in the book are real, and an attempt to bring back the Wooly Mammoth is happening, as detailed in the “Epilogus hominum” in order to try and slow global warming.  Flynn does a stellar job of bringing together fantasy and history and Mammoth is a joy to read.  The book is a cautionary, bold, loving and instructive tale that is mostly historically accurate, always funny, and often poignant.