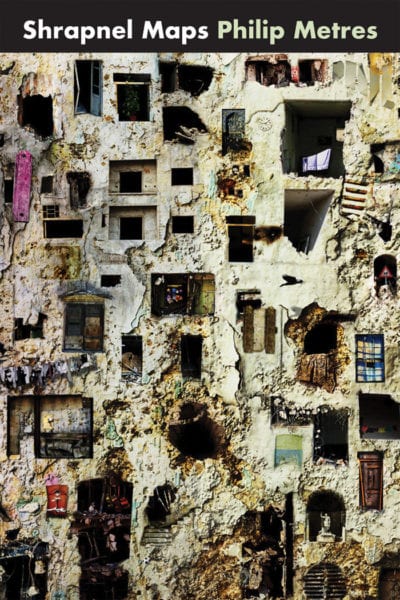 In his “Afterword,” Philip Metres writes, “Shrapnel Maps is my journey to clarify the question of belonging in a land with so many different names that to try to speak them all is to become crowded with history: Canaan. The Land of Israel. אֶרֶץ†יִשְׂרָאֵל†. Palestine. فلسطين†. The Holy Land. The Levant. The Middle East.” Indeed, Metres’ poems often read like a cacophony of competing voices, points of view, like schizophrenics strenuously arguing with themselves.

An Arab-American who feels strongly about the Palestinian homeland, Metres clearly sees the complexities in the region and reflects them so succinctly and comprehensively in his poems and prose sketches, reflecting the good and bad on both sides. Currently living in a neighborhood in Cleveland with a significant Jewish Orthodox community, Metres, who teaches at John Carroll, a Catholic university, and has been awarded several prestigious prizes as an international peace writer, also comments on diversity within the United States.

The collection opens with a parable about quarreling neighbors who fight over a tulip tree; the muted violence foreshadows the conflicts to come. “As with the baby brought to Solomon, someone must give,” he writes, citing the “Judgment of Solomon” story from the Old Testament Book of Kings. This is followed by another parable, “Two Neighbors,” which contrasts a cordial, civilized encounter between two people in Cleveland with a less friendly one in Jerusalem.

“A Concordance of Leaves” is a suite of poems inspired by his sister’s wedding in the West Bank town of Toura, but, while on balance it’s a positive experience, this is not a simple epithalamium celebrating a marriage. Images of barbed wire and armed border guards with Uzis, checkpoints and bunkers appear throughout the celebration, and History leans on everybody.

we sip sage tea, maramia—named after
the mother of God—for sage slaked her

One of the intriguing aspects of this collection is the erasure poetry Metres includes from text pages of Mark Twain’s The Innocents Abroad. The best-selling book during Twain’s lifetime, it’s billed as a travel book, an excursion to the Holy Land, but Twain had his own ax to grind, inevitably, and one of the great satirist’s themes was the conflict between history and the “modern world.” He depicts Palestine as a wasteland, a desert, disregards its history as insignificant, overblown. Two of Metres’ erasures appear in the “tourist” sections – (Poster “Visit –”) while the third is in its own “Innocents Abroad” section. One such erasure – page 271 of Twain’s book – leaves the phrases, “they entered the country with their verdicts already prepared” and “see with the author’s eyes instead of their own, and speak with his tongue” unblocked-out, which about sums up Metres’ skeptical opinion of Twain’s book, at least insofar as it reflects the history and civilization of the land.

Four of the ten major sections of Schrapnel Maps are these cynical/satirical Poster (“Visit”) suites, complete with representations of kitschy Mitchell Loeb postcards meant to attract tourists. Meanwhile, there’s plenty of violence, hardship and pure heartbreak underneath. The section entitled Returning to Jaffa is one such heartbreaking suite that depicts the Jewish paramilitary Haganah’s 1948 violent eviction of Palestinians from Jaffa. This suite begins with another of Metres’s ingenious poems, which he calls “simultaneitys,” poems with instructions on how to read the various conflicting and contrasting voices. “Bride of Palestine” is to be read by four people simultaneously. The sections include “Guidebook,” a touristy verse poem that begins, “Welcome to Jaffa!” (It could be, “Welcome to Miami!” or “Welcome to Las Vegas!”); “Haganah Leaflet” which begins “I hereby direct as follows” with instructions to residents in the commanding voice of a conquering army; “Yafa/Joppa/Jaffa/Yafo” which begins with that “Bride of Frankenstein” echo, and finally, “Nahida,” in honor of Metres’ friend Nahida Halaby Gordon, for whom Returning to Jaffa is written. “Yafa/Joppa/Jaffa/Yafo” is particularly moving:

houses dynamited
people still in them

drowned during the exodus by sea

Metres also dramatizes the horror of modern day Gaza in one section, just as in the three-act “play,” “Theater of Operations,” he dramatizes a fictional suicide bombing through monologues, showing all the various, competing points of view.

Meanwhile, back in Cleveland, in a section called “Unto a Land I Will Show Thee”, complete with a picture postcard of an idealized Palestine and the message: “Visit Palestine See Ancient Beauty Revived,” we read:

In the Heights, we calculate the statistical risk of greeting strangers,
memorize geometry of eyes. Study arabesques in concrete sidewalk
slabs as we draw closer to or farther from temples on opposite ends
of our town: Catholic and Jewish. Greet the stranger gingerly, as if
our words could bruise or batter. Down the street from the old Jewish
orphanage—which, last century, the city once denied a permit—
outside my home, I say hello and my neighbors look right through
me, as if I can’t be seen, or they say hello and surprise me out of my
silence. “I like your sign,” a woman nods, pointing to our placard: In
this house we believe… kindness is everything. Assonance of Sabbaths
side by side, we scan the prosodies of hemline and headgear, imagery
of unveiled front room windows, stanzas where we display the wares
of our faith, as if on sale, hoping our enormous gods will notice, lean
down, and scoop us up.

Not that America, with its own genocide of natives, is meant to be some paragon of peace and acceptance and diversity, but the level of anxiety does seem to be taken down a few notches in Metres’ writing, even though in the same section we read a smoldering exchange of points of view at a university presentation on the turmoil of the middle east in a prose piece called “[Family]”. Metres writes: “ I sit like a child at the table, watch parents grip utensils, spit words like shrapnel.”

Indeed, as Metres shows over and over and over again, we are one human family, but, unfortunately – inevitably – we seem always to be at each other’s throats.

← New giveaway!
A review of Griffins Perch by Ian Conner →