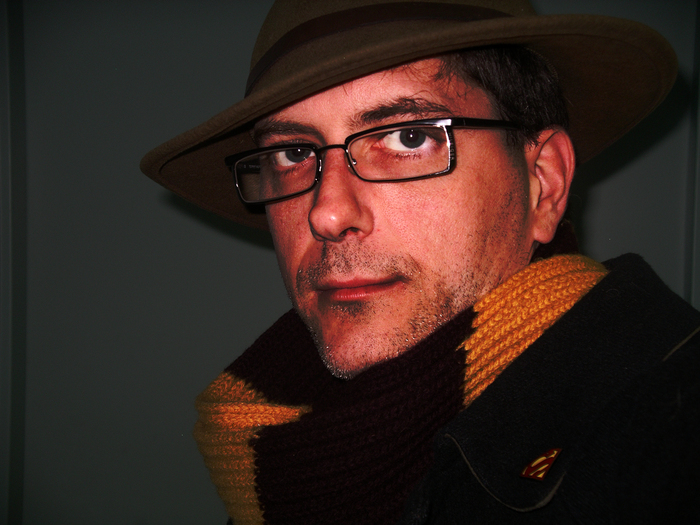 Your latest book, The Albatross Around the Neck of Albert Ross, recently launched from Lavender Ink Press.  What would you like readers to know before they delve into the work itself?

First, let me say how excited I am that my book of short stories is out from Lavender Ink. It has been years in the making, and I am delighted that it is finally in the world.

The Albatross Around the Neck of Albert Ross is my first published book of fiction. It is perfect for adults and young readers. So, get your copy now. You’ll love it.

In six riveting and moving stores, accompanied by twelve paper-collage illustrations, this collection is in tune with the joys, heartbreaks, and absurdity of everyday life. Through the central theme of flight, transformation, and recognition, these stories plumb the soaring struggle of relationships in pivotal moments. The stories comprise a boy on the edge of adolescence fears his next-door neighbor might be a witch; Emory Bennett and Henry Albright confront death, recovery and a friend’s ghost on their way to a Halloween spectacle; a ferociously independent rabbit takes charge and rewrites his easily led nephew’s homework; a sister and her little brother disappear into invisibility on Christmas Eve, only to see themselves for the first time, and a retelling of Hans Christian Anderson’s Nightingale.

Ranging from lush spice forests to a backyard garden, from a flight over the ocean in the grip of an albatross to a mother and son transforming into butterflies, The Albatross Around the Neck of Albert Ross revolves around the endlessly complex, frequently surreal experience that is growing up.

A good friend, Michael Kelleher, wrote this blurb to support the book’s release: “At once tender, funny, woolly, and wild, Geoffrey Gatza’s lyrical stories evoke the eternal childhood of the imagination, making myths out of the tedium, heartbreak, and joy of growing up. Each one brings me right back to a moment in my own life that I thought I’d forgotten, allowing me to see things in a way I hadn’t thought of before.”

You’ve worked with many outstanding literary publishers throughout your career.  What drew you to Lavender Ink Press for this particular project?

In manuscript form, The Albatross Around the Neck of Albert Ross, was sent around to a few publishers and contests. One early success, it was named as a finalist for the FENCE Modern Prose Prize. So with that encouragement, I kept working, pushing the writing, and with the help of many friends, I got the stories into an winning format.

Over the summer, I was working with Bill Lavender, the publisher of Lavender Ink, on his latest book of poetry, My ID, which BlazeVOX [books] published in September. Having known Bill for years now, it was an honor to work with him on a book. It was a wild project, and we worked very well together. Our presses are very similar in spirit and nature, so it was natural to pitch the idea of The Albatross Around the Neck of Albert Ross, to him. Bill was very receptive even though it is children’s literature. He was encouraged by the excellent reception of my previous book of children’s poetry, HouseCat Kung-Fu: Strange Poems for Wild Children, so he readily agreed.

I was fortunate enough to be able to design my book and incorporate my paper-collage illustrations to accompany each story. Any other publisher would have their ideas on how the text should look and how it would be illustrated, if at all, as many presses employ their illustrators and book designers. So I could not be happier with the look, feel, and shape of the book. It is a medium-sized paperback, not too large for child-sized hands and just small enough to make it magical for adults.

In the few weeks that it has been out, there has been an incredible reception to the book. It has been selling very well, and readers have told me that it provides a much-needed sense of joy. This reaction is entirely different to my poetry, so I am experiencing overwhelming bouts of happiness.

In addition to writing fiction for young readers, you are an accomplished poet.  What can YA authors learn from poets about literary citizenship, community, and the craft of writing?

Poets have a beautiful community, one I value very highly. One that I am in awe of, at this moment, especially. It is March 3, 2020. Tomorrow AWP will go on as planned in San Antonio despite the real danger of the Covid-19 outbreak. AWP is arguably the largest yearly gathering of poets and writers in the US, and the excitement, energy, and opportunity are palpable. Their enthusiasm has not deterred by the outbreak as I might have expected. I admire our community’s resilience in challenging times! And, probably, there will be more than one poem written at AWP about the value of literary citizenship.

That said, I do not think poets can teach the community of children’s literature anything. Their community closely mirrors our own. Writers, readers, teachers, and librarians work in close communication with one another. They meet frequently, have conferences, and produce dedicated journals that work to promote children’s literature. Although there are dissimilarities, children’s writers and poets share core values, such as the love of finely crafted writing that tackles, head-on, reader’s dreams and aspiration, hopes and fears, cultural identities, and political differences and disparities.

In the poetry community, college professors are the lead in scholarship. In the children’s literature community, that job is conducted by school librarians and teachers. Readings do not take place in coffee shops or bars, but writers go to libraries, visit schools, and read to children in classrooms. I am lucky to have a local, yearly conference, the WNY Children’s Book Expo, that brings in significant writers to Buffalo’s schools and a large, final event at the convention center. I met a lot of great authors in November and even had time to talk with Gordon Korman and Peter Brown, so it is a fantastic opportunity.

One interesting difference in our communities is in the language used to describe the writing. When I spoke with a bestselling author/illustrator about his book, I mentioned how I enjoyed the metatextual elements of his writing by using a single letter from the alphabet to illustrate the oscillation of the inner life and outer life’s struggle toward reconciliation. To a poet, this would be a fine appraisal of their work. But, the kind author looked blankly back at me, not sure what to say. I followed up quickly before he could speak and said how much I liked his book, and the images were beautiful. A big smile crossed his face, and then we could begin a talk about his writing and craft.

You are also the driving force behind BlazeVOX Books, a well-known publisher of experimental literature.  What has your work as a curator opened up within your creative practice?

This is an excellent question, thanks for asking. I love to curate our bi-annual journal BlazeVOX as well as develop our catalog for BlazeVOX [books]. It is beautiful to work. I get to see many styles of writing from a large and diverse group of authors. I have been doing this long enough to watch and admire how poets and poetry have evolved over the decades.

In going through the submission for the journal, we take pieces that are good writing and fit together as a whole. A theme develops in the process. Over the 20 years, I’ve been curating the journal I have learned to trust that feeling, knowing something will develop between the words of each writer to form a cohesive collection. It is a wild act of creation, and I love doing it.

I have learned to extend that trust to my writing and, more recently, my paper-collage illustrations. I trust silly ideas that I jot into a notebook can be useful in the future. I trust that grouping poems together that might never seem to get along, can, if placed in the right order over several manuscript projects, will build into something magnificent. I also trust that a single creative mind can create in many forms and still write about the same concerns.

As you promote your latest book, what events, workshops, and readings should we know about?

GG: I have quite a few events happening in Buffalo in the coming months. There will be a release party in early April for adults and children at Brighton Place library that we are going to Livestream. I am finding a receptive audience for this book in Buffalo, so there will be several readings around the surrounding areas in poetry reading series as well as in school libraries and classrooms. A reading tour is in the works for the summertime. I am hoping to visit NYC, Chicago, and perhaps LA, but with the Covid-19 virus now moving past the outbreak stage, I am going to take things slow and responsibly.

What’s next?  What can readers look forward to?

I have fallen hard for children’s literature. I have spent five years writing and crafting several projects for young readers, so my hope for The Albatross Around the Neck of Albert Ross is that it will be very well received and open doors for future book projects. At present, I have completed a new book of poems and two short novels.

Goodnight Nobody: More Strange Poems for Wild Children is a fully illustrated collection of 24 poems. The poems range from a young girl who dreams of being a ballerina; the best restaurant in the world is located near a farm in Ohio and is run by a chef named Wembley Worm, a young girl who confronts dreams with reality over a winged horse named Rowena. It is a cheerful read and one that I am very happy with.

Quickly and the Dead is a novel for middle-grade readers. It concerns a boy named Parker Quickly, who might have died, as he explores his life through the lives of possible-Parker-Quickly’s throughout the multiverse. I am shopping both around to interested agents. So, with luck, these books will be in a bookshop near you. But until that time, we can enjoy the six beautiful stories in The Albatross Around the Neck of Albert Ross! Hurray and thank you!

About the interviewer: Kristina Marie Darling is the author of 27 books, most recently Ghost / Landscape with John Gallaher (BlazeVOX Books, 2016), and Je Suis L’Autre: Essays & Interrogations (C&R Press, 2017). She earned her BA and MA from Washington University in St. Louis. Her awards include three residencies at Yaddo, where she has held the Martha Walsh Pulver Residency for a Poet; a Hawthornden Castle Fellowship; a Fundacion Valparaiso Fellowship; and residencies at the American Academy in Rome. She is the recipient of grants from the Whiting Foundation and the John Anson Kittredge Fund. Her poems appear in New American Writing, the Harvard Review, the Mid-American Review, Poetry International, Passages North, Nimrod, and many other magazines. She has published essays in Agni, the Gettysburg Review, the Los Angeles Review of Books, the Iowa Review, the Literary Review, the Kenyon Review, and elsewhere. She is editor-in-chief of Tupelo Quarterly, associate editor-in-chief at Tupelo Press, and a contributing writer at Publishers Weekly.