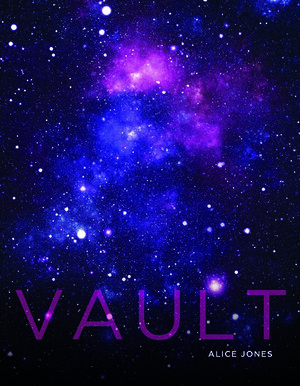 This sixth collection of poetry by Alice Jones, titled Vault, is a brilliantly arranged collage of themed sentences in poems that present a carnival of related facts, observations, and aural delights. Enjambed long lines weave in sentences of fascinating associative morsels of knowledge and research around and through deft vocabulary.

The book is unified by structure. Arranged in sections with vowel name heading just as we learned in school by rote: A, E, I, O, U, Sometimes Y, four poems in each section tend to emphasize that vowel. The poems, all with two-line stanzas, range from two to four pages in length and please the ear with alliteration, assonance and rhythms of multisyllabic words.

Section E contains the title poem, “Vault,” a homage of sentences focusing on containers of cave, prison, chateau, royal box, sarcophagus, and tennis court. Jones manages to vary use of the word “vault” throughout the poem, with meanings related to parkour, gymnastics, track and field, banking and even a “barrel-shaped organelle of eukaryotes.” In a poem fit for a slow read aloud, Jones may also be describing her own poetic method of creating adroit linguistic associations:

…Order, the mind likes it, make it mine,

mine the ore of language, tongue it through the mouth, out the rough pink trough, pronounce,

utter a list, save it on paper, book as a bank vault: first bilingual dictionary – Mesopotamia,

the Shang Dynasty; Apollonius compiled a list of words used by Homer. If the change-up fools

the batter and he still connects, it will probably be a foul; the sonnet’s volta, a change-up by

Two poems in the book employ the cento, an historic collage form that uses entirely the work of other writers to compose a new and different poem. Some current poets who use the form attribute the lines to the writers whose work they are assembling by number or footnote. Using sentences from prose and poetry, Jones adds the name of the writer in small type at the end of each sentence. The word cento refers to “patchwork garment” in Latin and one hundred in Italian. Jones gives us numerous themed entries in each of her two well-cast centos.

Section E contains the cento, “Darkling I listen,” that focuses on death with fifty-seven both morose and brilliant sentences assembled and traipsing the page to ultimately delight the reader: “I could tell you more about radishes. (Beckett) a Dialogue between, / The Spirit and / the Dust. (Emily Dickinson) Death is terrifying, but it would be even more terrifying to find out // that you are going to live forever and never die. (Chekhov)”

Section U contains the intellectually delightful cento, “Mud,” that collages sentences containing the word “mud” and in a few instances a related variant from twenty-nine writers. The writing is dense and precise with aurally meandering sentences that invite a slow appreciative read-a-loud: “My writing is as clear as mud, but mud settles and clear streams run on and disappear. (Gertrude Stein) / ‘Yes, and her petticoat; I hope you saw her petticoat, six inches deep in mud, I am absolutely // certain, and the gown which had been let down to hide it not doing its office.’ (Jane Austen)”

A vault is a container. Think of a swimming pool or an ocean. Readers of Vault may feel as if they have been swimming in words and diving into a galaxy of sentences. Our universe can be considered a vault as suggested by the artistic rendering of the Milky Way on the book’s cover.

With deft follow-through, the poem, “Worth,” begins by echoing the prior poem, “Mud,” in the lines, “Now in the // Indonesian pit-mine, it takes 250 tons of dirt to find one wedding band’s worth of gold,” all the way to a lovely image drawn from transportation, science, and spiritual realms, in a “transit of molecular blessings.” This poem, as well as others throughout the book, offers pithy gems, such as “We’re all having to do with less as the era of muchness / evaporates, what are we left with? – a house the bank owns, the view from here,” part of another dense and well-crafted sentence.

Jones then goes on in the same poem, “Worth,” to write of many vaults and what is the worth of their contents. There is a fridge with a nod to fellow physician/poet William Carlos Williams, “It was as // wonderful as plums in the fridge.” There is the “kelp- / filled sea.” The poem turns to the vault of language in the “shape of a thought, but no language it can / fit inside of” referring to a person afflicted with aphasia, a disorder of language often caused by a stroke. Jones ends the poem with an allusion to Alice’s rabbit hole, another container.

This poet obviously enjoys semantics, ending this poem with reference to the moon and sea, while using vocabulary to incline the reader to think of not only the moon, but back to language itself with the mention of “runnel” evoking muscular movements of a tongue, “pocked like the moon by comings, / goings, craters, silvered runnels, worth forging itself into form, the green-black waves.”

Many poems connect one to the other. The terrific poem, “Hole,” draws the reader into vault, tomb, murder, cave of pyramids, and wormholes. Poems in this book resonate one against the other, just as the poem, “Vault,” resonates against “Hole.” This poem resides within the “O” section. At the end of the poem is an earthy word plunge referring to how we exit a hole into life, “filled and fed, too large for nowhere, cave out, birth bed (he went in, you came out) central / nest, red purse, humming meat, oven , stairway to otherwise, funnel, the necessary door.” The startling simplicity of the in/out pithy sexual dichotomy is entertaining in its succinct accuracy.

After the poem, “Hole,” we read the poem, “Tongue.” which repeats the delights of language. This time the in/out dichotomy regards speech, “What goes in, // comes out, utterance or nonsense, the owl and the pussycat, an articulate caterpillar.” What a joy to read aloud. These lines juxtapose nicely up against more complicated intellectual lines.

This collection is a word feast to be read over days, not in one sitting, and these poems by Alice Jones deserve to be savored. Despite frequent medical and historical multisyllabic vocabulary, many of the poems regard common social phenomena. Readers will appreciate each word as they feel the momentum of stylistic and linguistic rhythms within and between sentences. Those who love language as well as poets intrigued by craft will welcome this book to their libraries.

About the reviewer: Mary Ellen Talley’s reviews have been published in Colorado Review and Compulsive Reader as well as forthcoming in Sugar House Review and Crab Creek Review. Widely published in journals such as Raven Chronicles, U City Review and Ekphrastic Review as well as in several anthologies, her poems have received two Pushcart nominations.