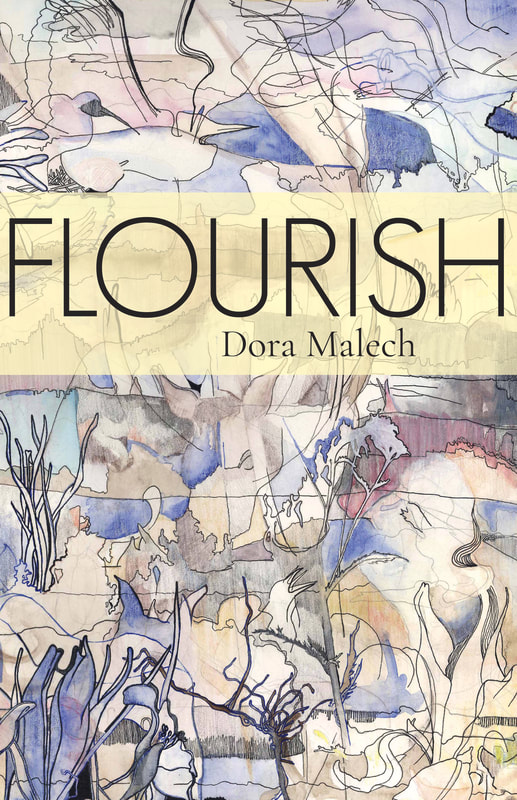 Language manipulation, word play, disassembling, words used for sounds in experimental manner, deliberate morphing of constructs, obvious slant rhymes, effective alliteration, quirky compressions, tantalizing parataxis—these are elements at play in Flourish, a fascinating and accomplished collection of forty-seven poems. Malech’s chosen epigraphs preceding each of the four sections of the collection, promote the theme of her title. In many of the poems we discover the element of flourishing, as well.
One such, is “Aubade” (p. 32) a poem about the sun’s effect on the traveler and on the fields:

The sun’s the only one of us
with a direct flight into Eastern Iowa.

This poem, first published in New England Review, begins with the hair being pulled, culled of throwaway flyaways, and ends with a cleanup of strays ready to clog the bathtub drain. The poem then delivers its poignant turn: “The culprit’s always mine. / Is me,” Malech writes, telling us benignly, matter-of-factly, but perhaps not good-naturedly, the fault is always the female’s, not the male’s.

We can find narrative at work in both of the above citations, but for many of the poems in Flourish, other elements are more important to Malech than narrative. “Personal Device,” (p. 25-26) for example, is written in 26 couplets, but often disassembles normal sentence structure, twists expected phrases into something new, and even though narrative manages to show its face, forces the reader to ponder its meaning. The following stanzas (stzs.7 through 13 of the poem) illustrate some of these characteristics:

Larva? Oh, let’s say imago (like
the night is Jung) as this particular

stage name)—even almost grown glows on and on,
and then, the word (a stage) metamorphoses

into the word (as gate) and imago opens,
multiplies, becomes (God bless you, Latin)

imagines. r u still there? *sends up speech
bubbles* I heart you. Sure it smarts, but still

one can refresh, go for a scroll to clear
one’s thread. All tongue tied to all thumbs trips

“Peter Piper Speaks and Spells” (pp.38-39) also works wordy magic with tongue-twisty language on the topic of vinegared pickles; they almost sting with their sour bite. (Peter Piper never picked such a peck! say I.) And Malech’s phrase “acetic rewind” nearly tickled this reviewer’s palate.
Many poems in this collection (such as “Portami il girasole…”, p. 70) are not easy and require time for comprehension. “Minerals, Mine” (p. 50) delivers a near-political message using the rhythm of a repeated phrase as unifier.
Most of Malech’s poems are unrhymed, though many use slant rhyme and skillful enjambment allowing for mid-line rhymes. “Still Life” (p.61), however, is fully rhymed and composed of six quatrains with a straight a-b-a-b rhyme scheme. Here Malech creates a verbal “still life” painted (in poet Rick Barot’s words) with “the intricate amplitude of language itself,” and engaging enlargement “steeped in granular attentiveness.” As Malech gives attention to the objects lying on the table, she shapes things like “free pens from doctors, a stapler’s open bite” into a kind of visual canvas. (She is actually a visual artist as well as poet.)

Malech’s poetry, ever leaning toward the experimental, nevertheless reveals derivations from past poets—Sylvia Plath is one, and even Emily Dickinson, (as in “Unconditional,” p. 18). In the acknowledgements, Malech names Mary Jo Salter as her mentor, who, in turn, studied with Elizabeth Bishop. She offers this volume in memoriam to such prominent poets as J.D. McClatchy and Jane Mead, and lists Rick Barot, Ilya Kaminsky, Mary Ruefle, Cole Swenson, and many others, as her friends and colleagues.
As in Bishop’s works, Malech seems to present some of her poems in utter simplicity, then surprises with the unexpected turn at the end. “Dear Reader” (p. 67) does this quite successfully. Some of the poems appear enigmatic, but when studied, reveal a coherent whimsy. “Come Again” (p.55) plays on the comedy of typos and “Euscorpius italicus” ( p.37) on the fear of spiders, both done with commendable control.

The numerous fellowships Malech has received indicate her deep involvement with the discipline and craft of poetry. These include a Baker Artist Award, an Amy Clampitt Residency Award, a Ruth Lilly Poetry Fellowship, a Civitella Ranieri Foundation Writing Residency, a Glenn Schaeffer Fellowship a Johns Hopkins University Catalyst Award, (she is assistant professor in The Writing Seminars at Johns Hopkins.) Her publication credits include The New Yorker, The Iowa Review, The Kenyon Review, New England Review, and many other weighted sites. She holds a BA in Fine Arts from Yale University and an MFA in Poetry from the Iowa Writers’ Workshop.

Flourish is Dora Malech’s fourth book of poetry. In its final verse, the poet invites the reader to “pour more sunlight,” to celebrate “the act we make of the temporary fact of us,” (p. 91), in other words, to flourish. This is, in the main, a volume of poetic eloquence, even as it lays down new poetic fundaments.

← An interview with R.W.R McDonald
A review of The Alpaca Cantos by Jenny Blackford →