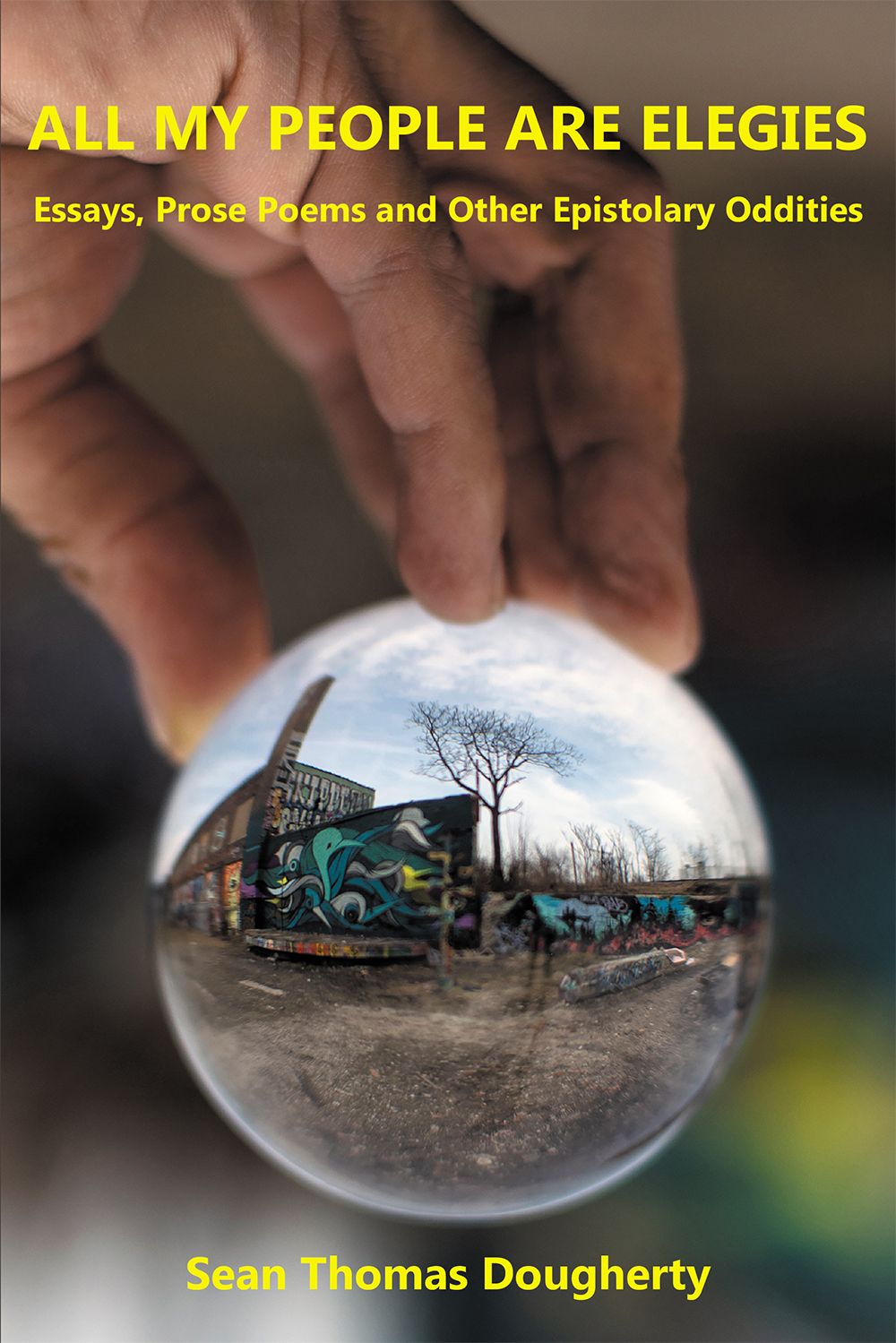 Reviewed by By Michael T. Young

Sean Thomas Dougherty’s latest book, All My People Are Elegies, is ostensibly a collection of letters written in response to rejections from editors. This would seem to make it a niche book for other writers. But who hasn’t experienced rejection, even if you aren’t a writer, even if you aren’t an artist of any kind? It’s safe to say rejection is a universal experience. As are some of the other themes of these meditations: frailty, weakness, failure, loss. The writer ranges in subjects from friends long-dead to the pleasure of drinking tea, watching a sunset, or smelling your child’s hair. As Dougherty touches on these many subjects and themes, one is taken in by the compassion in his approach.

Another reason I say these are “ostensibly” letters is that they read more like poems. That is because Dougherty is, at heart, a poet. While these letters don’t move necessarily with measured rhythms, they do move with definite pacing, not with logic, but with metaphorical leaps. These are not bitter arguments and rebuttals but meditations that reveal connections across vast spaces, evidences of the tenuous threads that tie us to each other and to the world. For example, the poem “Dear Editor, Who Never Got Back to Me,” starts, obviously enough, addressing an editor who never responded. But the writer suspects that the submission was lost in the mail and that consideration expands to make lostness the subject itself. First it transitions into considering how a person can be lost in their own mind, then how the speaker is lost in understanding the show Lost, and finally how a child loses the need to be held through the night. While such desultory movement delights the reader, these meditations on the commonality of such frailties are not without hope. Indeed, there is a persistent reminder of the miraculous throughout.

Who of us doesn’t constantly fail? But the miraculous is all around.
“Dear Editor, Who Returned My Poems and Said They Weren’t Taking Submissions but Didn’t Tell Me When to Submit”

Yes, all around us and all through this collection there is this presence of the miraculous. It comes in a variety of ways: the ordinary moments of connection or unexpected revelation. It is another way the compassion in these pieces tie seemingly disparate people or elements together. An early letter addressed to the “Editor Sipping Wine the Color of Posh,” starts with concern for the editor himself:

I’ve been worrying about you because I read on your guidelines that you receive over 10,000 submissions. Just reading that made me want to pop a handful of Tylenol PM.

Such compassion as this extends in every direction and makes the humanity of All My People Are Elegies a nearly palpable presence. This same poem dances toward another of those miraculous moments where the speaker’s wife was startled by a white owl:

. . .it hesitated in the air like a giant moth, before rising with one big flap and disappearing over the power station. She said she couldn’t press the gas pedal to go she was so startled. But she did, she drove away. What I’m trying to say is the miraculous is like that everywhere, but we cannot keep it, we must leave. There are children waiting to be fed. We have a pork roast to buy, some potatoes. Our bosses are waiting for us to punch in. But editor, dear editor, that great owl is still out there.

There are responsibilities we all have but there is that miracle waiting to be found like Oppen’s brick. The compassion in these letters reaches out to those who have rejected the writer, out to caregivers of patients with dementia, to autistic children, to alcoholics, to every suffering self. In its expansiveness, that compassion finally finds its way toward various forms of endurance and transformation. And that is what makes these pieces worth everyone’s time.

You must learn that you can choose who you are branded by in this world.
“Dear Good Reads Reviewer, Who Gave My Book One Star”

My wife persists despite her own wreckage.
“Dear Editor, Who Apologized for Taking Six Months to Reject My Poems and Said They Came Close”

Dear Editor, not all rejections are the same, and some, well they are a kind of hope, the way the stars are a kind of hope, so far in the dark there above the railroad tracks and the tenements and a gymnasium, emptying out with the last stragglers and quips and hollers of those years so long ago before we’d ever even fallen—“Dear Editor, Who Sent Me a Tiered Rejection”

This concludes the collection, sounding a note of hope right at the end, a note, I would say, that is there all along, an undercurrent gently moving us toward this reassurance.

While I have little more than praise for the heart of All My Friends Are Elegies, on a technical note, I do wish the book had been more carefully edited. This is something I lay at the feet of the publisher and not the poet. Though I don’t like doing that either, as NYQ Books has published a few poets I admire deeply. But there are simply too many grammatical errors throughout the book to excuse: problems of subject/verb agreement, run-on sentences, sentence fragments, random shifts in tense. While one might pardon this as a gesture toward an improvised voice, one not stopping to correct itself as it rushes out a response in a letter; the errors are distracting because they don’t seem to serve any purpose. And these letters are from a writer, so one would expect a tighter rein on such things even when writing off-the-cuff. This is a good book and a good book needs a good editor. Someone should have given it the attention it deserves and made sure it was ready for the world because it’s a book the world should read.

The compassion, the humility, and embracing of human frailty found in All My Friends Are Elegies, is something to learn from. It is something that could inspire, as it did my own writing. I wrote two prose poems inspired from these pages. And I know I will return to them in the future for more inspiration.

About the reviewer: Michael T. Young’s third full-length collection, The Infinite Doctrine of Water, was published by Terrapin Books. His chapbook, Living in the Counterpoint (Finishing Line Press), received the 2014 Jean Pedrick Chapbook Award from the New England Poetry Club.  His other collections include The Beautiful Moment of Being Lost (Poets Wear Prada), Transcriptions of Daylight (Rattapallax Press), and Because the Wind Has Questions (Somers Rocks Press).  He received a fellowship from the New Jersey State Council on the Arts and the Chaffin Poetry Award.  His work has appeared or is forthcoming in numerous print and online journals including The Cimarron Review, The Cortland Review, Edison Literary Review, Lunch Ticket, The Potomac Review, and Valparaiso Poetry Review.  His work is also in the anthologies Phoenix Rising, Chance of a Ghost, In the Black/In the Red, and Rabbit Ears: TV Poems.  He lives with his wife and children in Jersey City, New Jersey.