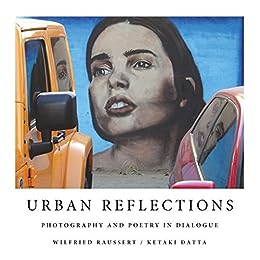 When driving through a big city, the eye catches what glitters:  lights, clothing styles, glamour. We often miss those things that appear trivial or simple, but important.  Urban Reflections is novel in the sense that it focuses on these seemingly trivial aspects, showing us how meaningful and lively they are – in effect, making them glitter.

Urban Reflections has some unique qualities, the first of which is its multi-cultural nature. German photographer Willfried Raussert has captured lively photographs of various objects from American cities and incorporated them in the book. Indian poet Ketaki Datta uses those photographs to focus on an expression of those photographs. The poet is inspired by her imagination, and her work is powerful, reflecting the complexity of the human psyche. The poem “Cantina Luchador,” works off a photograph of a canteen where a young couple sits. The poems explore a scenario where new friends are weighing the pros and cons of a growing togetherness. The girl’s open eyes reflects a growing trust.

The Poem “Sun dried Butterfly”, works with a photo of a smiling lady. There are colourful butterflies painted on the wall in the backdrop. The poetic imagination and expression is here also colourful. The butterflies are “voluminous in appeal and numinous in attitude”, though, as we are reminded, “they are only beauteous forms etched on a wall”. In the poem “Some other God” works with a picture that shows a car owner cleaning his car with great care with a duster though there is no dust on the car. The car is in front of the statue of Budhha. The contrast between the photo, and poem, reflects on the notion that Buddha admired hard work and that work is worship.

“Grabbing a degree” explores the way in which university study is not only a path to progress but it is a result of lot perseverance and toil. A girl is on her convocation with long flowing clothing.  The feelings expressed in the poem reflects the dream of a young heart full of expectation. The poem “Cleansing the Countenance” presents a photograph of a woman who has painted the right cheek in a maze of chiaroscuro of crisscrossing pattern. The poet explores what it would mean for the woman to clean the face and lave all dirt and impurities, juxtaposing that with the man in the car who promises carpet cleaning. The photo and the poem are beautifully complimentary, each enhancing the other.

The photographs presented here also portray the multiple dimensions and complexity of life. Every photo has a unique message to convey which is picked up on by the poet as she explores the sensations, feelings, hopes and struggles reflected in the images. Urban Reflections is a unique collaboration – beautifully presented and deeply meaningful.

About the reviewer: Dr. Saroj Upadhyay is a faculty member at The Neotia University and Indian Institute of Engineering, Science and Technology, Kolkata India