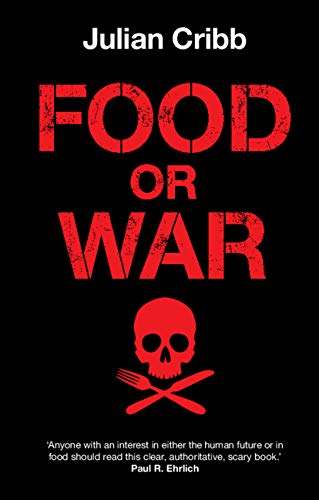 It’s hard to imagine a more credible science communicator than Julian Cribb. He’s published ten books, had over nine thousand articles published, won more than thirty two awards, is a Fellow of the Australian Academy of Technological Sciences and Engineering (FTSE) and of the Australian National University (ANU) Emeritus Faculty. From 1996-2002 he was Director, National Awareness, for the CSIRO and has edited many diverse publications from National Farmer to The Australian. Cribb was national foundation president of the Australian Science Communicators (ASC), president of the National Rural and Resources Press Club, a member of CSIRO advisory committees for agriculture, fisheries and entomology.  He has served as a Director of the Australian Centre for International Agricultural Research (ACIAR), the Crawford Fund, the Secretariat for International Landcare, CSIRO Publishing, the Australian Minerals and Energy Environment Foundation and the National Science and Technology Centre, Questacon. He was an Adjunct Professor in Science Communication at the University of Technology Sydney. All of which is to say, he knows his stuff.

Most of his Cribb’s writing focuses on the increasingly urgent existential threats facing humanity, and Food or War is no exception. Food and water insecurity is at the heart of most of the conflicts that have occurred since humanity first picked up sticks, and yet it’s rarely talked about in mainstream media. When the need for more sustainable agricultural practices comes up at all, it’s usually seen as a secondary or local issue, and one that concerns farmers primarily. Cribb brings food insecurity to the forefront of his arguments, and provides a thorough history lesson that starts with the last Ice Age and works through pivotal wars in history from The Thirty Years War, the Russian Revolution, Lenin and Stalin, the two World Wars, India and Partition to the Vietnam War, Pol Pot and the Khmer Rouge. What Cribb calls the “nexus between food and conflict” is very throughly explored. Food (and water) insecurity is no less relevant to our modern world than it has ever been, and might be one of the more critical of the ten existential threats that are facing the world now:

It is no exaggeration to say the the fate of human civilisation in this century may turn on the pivotal question of whether or not we can sustain the food that nourishes us through the peak in human numbers. Failure to do so, without a doubt, spells war. (61)

The central thesis of the book is ten made-made threats are interrelated and that the solution needs to  collectively addresses them. The threats include ecological collapse, resource depletion, weapons of mass destruction, climate change, global poisoning, food insecurity, population and urban failure, pandemic disease and uncontrolled new technologies. It’s a pretty unsettling picture but if we continue to ignore the threats in favour of short-term denial and temporary comfort, if such a thing even still exists, the risk we face is no less than the extinction of the human race. As risks go, it doesn’t really get worse, and the doomsday clock is ticking.

Though the topic of Food or War is inherently uncomfortable, the book is beautifully written, wide-reaching in its scope, intelligently presented with detailed and careful evidence. Cribb writes eloquently about complex, and in many cases poorly understood, topics. His suggestions are practical, sometimes commonsensical and sometimes innovative, and the result is surprisingly positive, even against a framework of such urgency:

However cross-cutting solutions do exist. They include building a circular world economy that wastes nothing, recycles everything, mines nothing anew and no longer pollutes. They include transferring half of global food production back into cities, recycling all their wasted water and nutrients and then rewinding 25 million square kilometres of the planet to end the Sixth Extinction, under the stewardship of today’s farmers and indigenous peoples. They include eliminating the use of all fossil fuels – which will not only reverse global warming, but also end the present poising of every child on the planet (200)

All of Cribb’s suggestions are well-researched and available with current technologies. This includes such things as the use of urban food loops in mega cities – currently bastions of waste. Another suggestion is the employment of farmers and indigenous peoples as “Stewards of the Earth” in order to rewind forest and grassland restoration. The book concludes with six recommendations, which, taken collectively, have the power to not only save the human race, but change the world into a safer, more equitable, and healthier place. These recommendations are practical, and Cribb presents a number of case studies that demonstrate their viability,  but it would be foolish of me to think that such things as “Replan all of the Earth’s cities so that they recycle all their nutrients and water back into food production and fertile soil, or “Put women in charge of business, politics, government, religion and society…” are going to happen in my lifetime. I want to believe we are capable of it. The consequences of not doing so are unthinkable, and yet election results around the world do not appear to support what I’m seeing and hearing in my bubble. Nevertheless, Food or War is an exceptional book, and if anything can save us from ourselves, this is it. We have to try. Food or War is more than a primer on the mess we’ve gotten ourselves into or a new way to look at the intimate link between our current food system, which we’re all part of, and the existential threat we all face, though it is both of those things.  Food or War is a guidebook for much-needed transformation. This book should be mandatory reading for everyone.