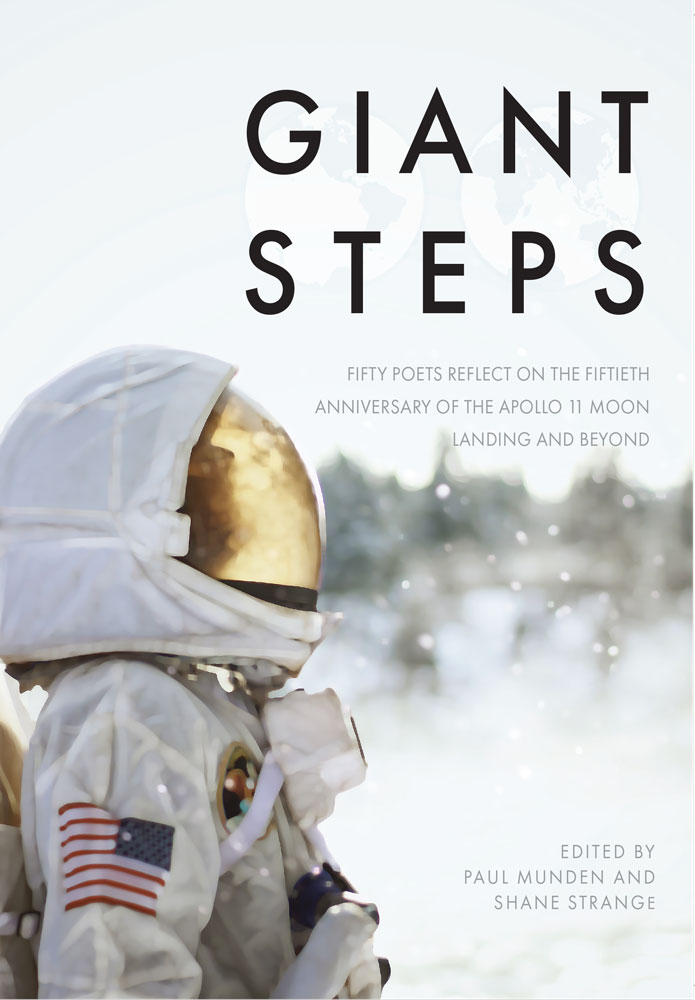 I’ve been reading a lot of poetry anthologies lately.  I really enjoy discovering the diverse ways that poets will explore a particular theme – not just to illuminate the theme itself but also to explore the human condition, the world we live in, and the timeless questions of what it means to be here, on this earth, during this time.  The theme of Giant Steps is the 1969 Apollo II moon landing, a pivotal moment in our history that provides rich fodder for exploration. For the fiftieth anniversary of the moon landing, editors Paul Munden and Shane Strange asked fifty poets around the world to submit two poems each, with one poem specifically about the moon landing and another more broadly addressing space or other ancillary topics. The result was one hundred thought-provoking pieces that differ dramatically. The editors have selected authors with a wide range of cultural backgrounds, perspectives and aesthetic styles. There are haiku and sonnets, found poems, visual poems, poems that conflate human pain and universal contemplation, and earthy poems rooted in domestic scenes. The poems pivot around climate change, loss, epiphany, transition, and perspective:

time folded in on itself, suspending us in an-
other perpetual virtual truth
and the hovering ghosts of
what could have been. (“Singularity” by Anne Casey)

A number of poets used a persona, transforming history into more immediate experience. Melinda Smith, for example, creates a persona poem set in the mind of Michael Collins, the less well-known astronaut who flew the Apollo 11 command module around the moon while Amstrong and Aldrin landed:

Eileen Chong also works with persona, in this instance giving voice to the moon itself, as Chang’e, the Chinese goddess of the moon:

They will never sleep again without
my song pulsing through their veins. (“Chang’e Watches the Landing”)

Fifty years on, a live
apocrypha, you excise
words from your score.

The work is set in such a way that each poem is informed by proximity, the second poem enhancing the first. Some of the poems play with the notion of “where were you”, contrasting nostalgia with the collective loss of innocence that comes with scientific knowledge, as with Anne Caldwell’s “Turbulent Summer of ’69″: “Our moon was no longer/a goddess firing her chariot across the heavens.” There is often a relationship between the two poems, as in Caldwell’s work, where wisdom and innocence are brought together paratactically; personal and galactic entangled as the adult stares back in time to the child: “Meanwhile, Andromeda spirals towards/a collision with our Milky Way.” (“On the Therapist’s Couch”)

Some of the poets use humour, such as Cassandra Atherton, who plays with time and fashion in “Space Couture”: “Bobbins spinning, pressure feet trilling down the aluminised plastic, the seamstresses are fashioning a place for themselves in history.” Then moves to Apollo 11 detritus: “The man in the gift shop says, ‘In space, no-one can hear your ice-cream” with a wink…(“Astronaut Ice-Cream”).

Lyrical poems sit side-by-side with experimental ones, such as River Wolton’s use of French, and textual elements like lines, dots and spaces, Christian Bök’s highly structured “Orchestrino”, a double acrostic of 11 words of 11 letters each, Andy Jackson’s “View from the Moon, 1969” which uses quotations from astronauts Neil Armstrong, Buzz Aldrin, James Irwin and Alexey Leonov against a l ist of extinct species, and Lisa Gorton’s highly condensed and elegant “Sun and Moon”:

There is so much to explore in this wonderful collection: work that stretches the imagination, plays with language, time and space in order to explore human endeavour, both scientific and artistic – and in many cases the distinction becomes blurred. Strange and Munden have done an exceptional job choosing and structuring poems.  The moon has inspired poets since long before pens existed, and yet somehow the poets chosen for this collection have found novel and powerful ways of illuminating her, and our ongoing relationship. This is a terrific anthology, beautifully curated and presented.