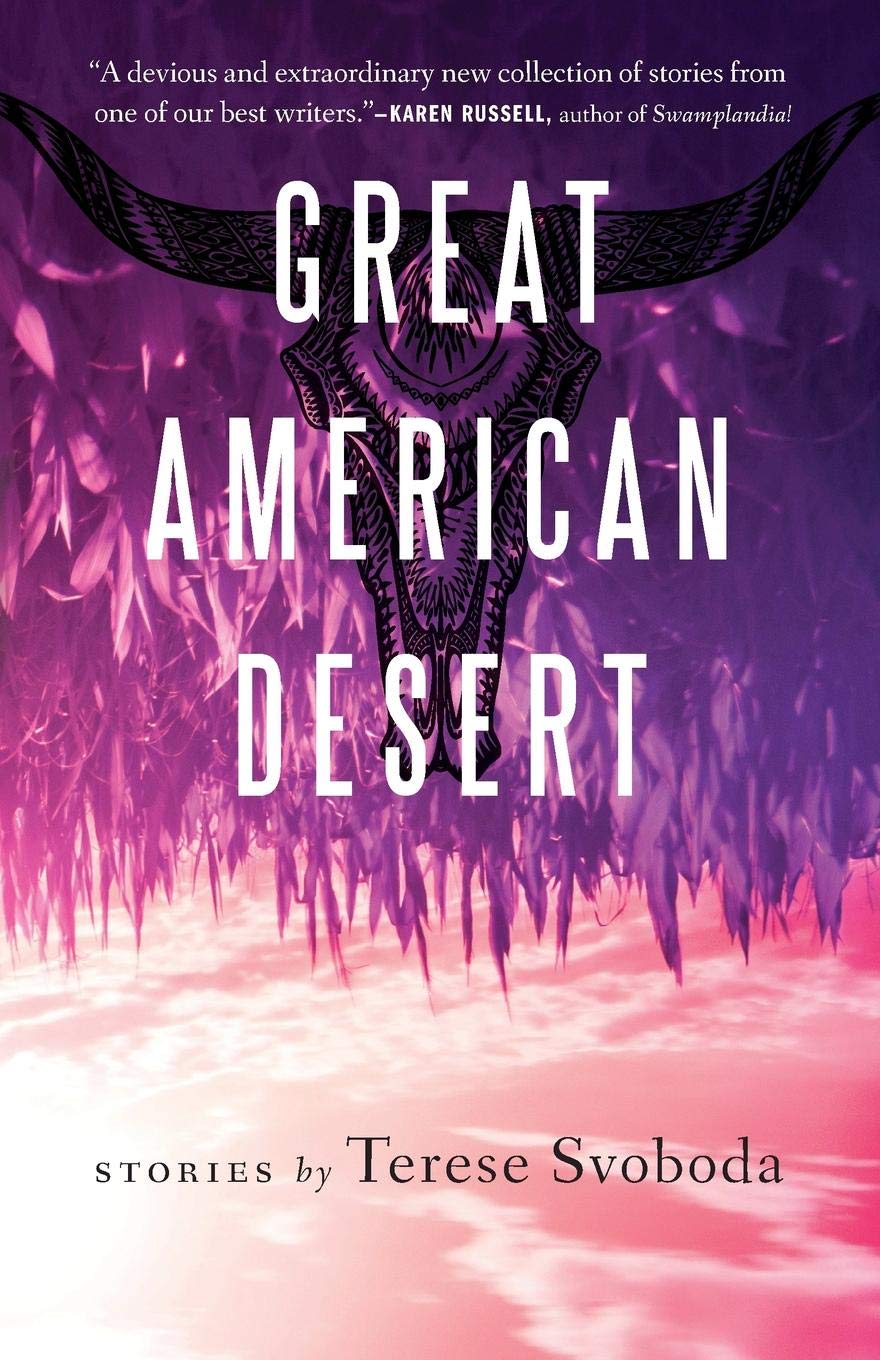 In the opening story of Terese Svoboda’s remarkable collection Great American Desert a boy tells other boys camped out on the Plains a scary story about “other people”. “They have long hairy arms and strange eyes that catch the firelight. … they are the ones who blow these plants ahead of them, blow the seeds with their mighty breaths…” The boys have an ambiguous relationship with the plants they have been sent out to watch over (we gather this is a not-quite an agrarian society yet): they know the plants are useful, but also sort of wish they were not there, so there would be no need to watch over them. As it happens, the duty saves the boys from a massacre. The story is eerie, unsettling, and violent in the way life is violent—the violence itself is not seen, but deduced from its results and undeniable.

As the plants are on the land before boys, and the boys, we understand, are there long before any of us, so do the rest of the stories interpret the relationship we have with that which is already here, the seeds that have been blown in with someone else’s mighty breaths. For Terese Svoboda’s characters, what is given—what they have come and think they understand—is the Great Plains, a space that is misleading with its openness. One thinks one can see “it” coming for miles, whatever “it” is, but, like the boys in “Camp Clovis,” the residents and travelers of the Plains continue to be ignorant—willfully sometimes—of what the land obscures.

In “Dutch Joe,” the land hides water, and it take a man with the experience that came before his coming to the New World—the skill acquired in the Dutch Low Lands building dikes—to find the water. In “Bomb Jockey,” the unseen war demands the manufacture of bombs in distant factories, and the surplus and defective weaponry then must be stored—hidden—under ground where it can invisibly leak poison while the locals’ gaze glides over the neat subdivisions of the town that the depot supports.

Svoboda’s characters contend with people who came before them: daughters with fathers, grandchildren with grandfathers, high-schoolers with college drop-outs. There is always someone there to blow the seeds into your face. Someone to obscure the vision. There is always something that manages to be not-there: pollution that is not believed in, menace that can be tied in conversation, meanness in the expectations of filial duty.

The stories proceed in a rough chronological order, but are not linked—Svoboda trusts and permits the reader to fill in the gaps in time and space between the stories with other characters, known or imagined. The final story, like the first one, can be read as a speculative parable. Throughout the book, the midden, a pile of refuse that any human settlement produces, makes appearances, first as itself, then reinterpreted in dirt or concrete depending on the time period and what is being left behind. In the final story, “Pink Pyramid,” it is back as the titular structure, mysterious, and finally with a will of its own in the almost post-human future.
Svoboda’s extraordinary imagination and her special gift for the keen observation of the off-kilter, combined with her rich, agile writing, produce in Great American Desert an oracular body of fiction that compels and fascinates.

About the reviewer: Nina Murray is a Ukrainian-born American poet and translator. She translated, most recently, Oksana Zabuzhko’s The Museum of Abandoned Secrets. Her book of poetry, Alcestis in the Underworld, is published by Circling Rivers Press.