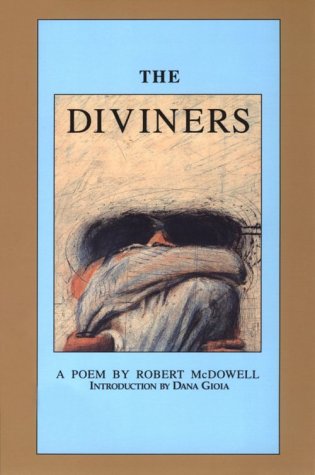 Reviewed by by Karen Poppy

To understand the poetry of Robert McDowell, it is important to see him through the lens of the
late, great poet Philip Levine, whom Robert McDowell recalls proclaiming, “Robert, he’s his own cat!”

In a way that is prophetic and unique, Robert McDowell enters the circus of human stories, and tells them wryly, reminding us that humor exists even in some of our darkest and bleakest moments. He also flips the often staid narrative poetic form, using it to create comedic takes on moments in which his human subjects find themselves at their most vulnerable, in frequently tragic and unresolved situations.

Due to Quiet Money‘s near-pulping at the hands of its first publisher, Henry Holt & Company after its release in 1987, Robert McDowell will also tell you from first-hand experience, that this vulnerability is not limited to humans: “most books of poetry lead a perilous life, but this book [Quiet Money] led a charmed and perilous life. Like me, it cheated death a few times.”

This story has the flavor of legend, but Robert McDowell assures that it is absolutely true—no poetic or other license taken. As he tells it, on a cold and windy day while on the Wesleyan University faculty, Robert McDowell realized that his book, Quiet Money, was not available for purchase. He called the publisher, and after much hemming and hawing, the publisher admitted that the books were in a warehouse in New Jersey, scheduled to be pulped. He called the warehouse, and with some stealth, picked up his books. He sold some copies at Wesleyan University, readings, and eventually distributed Quiet Money under his own publishing house, Story Line Press.

Quiet Money deserves new life as the breakthrough collection it was in 1987, the first collection of a fine poet. The story lines focus much on slap-stick and harder violence in Quiet Money. This is tempered though by other work in the collection, and in Robert McDowell’s second book, The Diviners.

The first poem of the collection in Quiet Money, “The Disconnected Party,” contains this type of slap-stick and harder violence. The speaker describes his life as “sidetracked twenty years ago” when he physically attacked his boss and ended up arrested, “Angry” that one of his friends did not answer his multiple phone calls the night before. The poem opens with the speaker planning a call to this friend, “someone I have missed for twenty years.” It then moves into the violent episode that led to the speaker’s arrest:

I had my hand around a paperweight,
The fifty-dollar kind from some boutique.
Somewhere between incompetent and ass
I pitched a wicked hard one at his belt.
His eyes popped out like eyes do on cartoons…
I sat on him and yelled Let’s Horseback Ride!
I thwacked his bottom with his favorite knife.

The speaker’s voice changes mid-poem to third-person, especially eerie as the poem’s protagonist wanders through his old friend’s house, as a mentally unhinged intruder. “The large backyard…dark and overgrown,” like the protagonist’s deranged mind.

Robert McDowell comes even more fully into his poetic voice in The Diviners, a narrative poem about a dysfunctional couple, Alan and Eleanor, and their son, Tom. For example, The Diviners contains a section about the 1960s, which has prescient, sensitive language that calls to mind today’s gun violence in the United States:

The faces and the land ahead look bleak…
He’d like to kill. A war is one good way.
But some nights when he’s quiet in his room
Tom eases up, a silent, grief-grown boy,
An inarticulate and bitter boy.
If his dad could only talk it out with him—
But he is like the Main Street Cinema
Since 1965—always dark.
Tom’s sense of loss and pain won’t dissipate
As he focuses more and more on TV death,
So easy to watch bland heroes sprawled in blood.

These lines appear hauntingly and disturbingly prophetic in our day and age, with so many mass killings by individuals who use guns. “A war is one good way.” A public of easy targets is another.

Quiet Money and The Diviners shine with forceful, hard-edged lyricism, in lines such as “She had it by heart, the mechanics of his trap, / A blood moon promising luck” in “The Librarian After Hours,” (Quiet Money), and “The life he made is shrinking in the mirror. / The anonymous driver downshifts, entering earthshift” in “The Nineties,”(The Diviners).

The title poem of Quiet Money serves as another good example of this brand of lyricism, with lines such as “Betty, asleep, looks like a separate country. / How can she make him believe in home? / In peace? Can anyone? Undertakers, maybe— / White jacketed illusionists keeping a low profile.”

This seems to be missing the point of Robert McDowell’s more hard-hitting lines: to tell the story directly and true, which good poetry can do just as well as good prose, and with similar devices. The musicality of many of the lines in Quiet Money also seem to be lost on this critic.

In the Introduction to The Diviners, on the other hand, Dana Gioia notes,

[a]mong these New Narrative poems, Robert McDowell’s The Diviners is
notable for its stylistic assurance and structural originality. Whatever
influences it bears from Robinson, Frost, and Jeffers—and McDowell has
scrupulously studies all three masters—have been completely assimilated into a forceful style unlike any other contemporary book-length poem.

Most readers of the new editions of Quiet Money and The Diviners will see the serious play of Robert McDowell with the hindsight it deserves. Groundbreaking and inspiring for future poetic narratives.

About the reviewer: Karen Poppy has work published or forthcoming in many print and digital journals, as well as anthologies. Her work is included in The American Journal of Poetry, The Gay and Lesbian Review Worldwide, ArLiJo, Wallace Stevens Journal, and Chaleur Magazine. An attorney licensed in California and Texas, she lives in the San Francisco Bay Area. More at https://karenpoppy.com/publications/

← A review of Wonder By R. J. Palacio
A review of Boats for Women by Sandra Yannone →