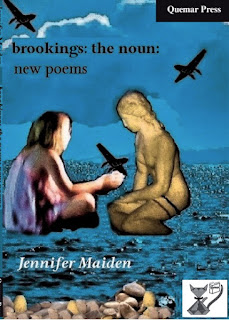 Jennifer Maiden’s writing is always strikingly current, and takes a laser-sharp view of politics, trends, scientific discoveries, and the state of the world, viewed through a political and poetic lens. Maiden’s latest poetry collection, brookings: the noun, is no exception. The poetry pivots around the word “brookings” and its various meanings, explored through the poems in a way that is often meta-analytical and meta-poetic. The Brookings Institute in the US is a government-funded organisation for  research, analysis, and outreach around defence and the future of war, and that is certainly one of the many references. ‘Brookings’ is also a little brook, seemingly safe but with the potential to turn at any time into a larger river. It can be a front to something more dangerous, signifying in this instance, a feint or a way of concealing something dangerous in order to fool the public: “brookings sleek as pebbles in our mouth for elocution”. In Maiden’s world, brookings include bandwagons around “noble causes” which also make it easy for people to replace action with hashtags in order to tick the box of engagement without actually engaging:

…some creature in the mind: soft little Brookings, a silk-nosed squeaker too gentle for words like Global, War or Money, who would not know the price of a gun. (“brookings in fur”)

Anyone who thinks of poetry as politically benign will be surprised by the intensity and engagement in this work. Many of the poems’ subjects are controversial and strongly worded, such as the “White Helmets”, which takes a swipe at the Syria Civil Defence group or former Australian Prime Minister Julia Gillard’s fellowship at the Brookings Institution’s Center for Universal Education:

Did you think I could be as true as this with Julia?’
Eleanor thought of the Malaysian Solution, the desire
to attack Assange, unquestion Israel, cut the Single Mother
Pension, other strict stances of a stingy nature,
all brooking now with Research’s sanctity. ‘ (“Hillary and Eleanor: 16:
Concrete”)

Maiden’s alternate universe is a place where the dead and living convene as simulacrum discussing and confessing transgressions. Many the poems in brookings are long, and feature extended explorations, not only on politics, but also on literary criticism, corruption, public relations, self-references, and dialogues between famous characters, often literary like Kenneth Slessor, Jorge Luis Borges, and Jane Austin, and political figures from the Trump family including, for example, Trump’s mother Mary Anne MacLeod and Tanya Plibersek. The slide between personal, political, and literary is super smooth and almost imperceptible at times—so the reader is drawn into the situation as participant, gaining appreciation for the complexity of the (real life) situations the characters find themselves in.

Maiden has no hesitation in putting the likes of Borges with an Australian critic/expert who discusses Kenneth Slessor (who makes an earlier appearance) while conducting a full-scale analysis of Borges’ work. Jane Austin and Tanya Plibrsek talk about refugees, and Princess Diana and Mother Teresa talk about Dodi Fayed and Khashoggi while possibly playing Monopoly. There are no sacred cows here, and the poems are often self-referential in a way that folds inward – referring to previous books, poems or stories, opinionated or deliberately provocative, but the language is always rich, moving, sometimes funny, and even at the extreme, provides insight into its personae:

the soul hardening inside the spine when all parades had gone.
The midnight had exploded into stars. They were alone, and
the harbour mirrored nothing as a thousand yachts moved on. (“The Thousand Yachts: Two: New Year’s Eve”)

Though the book stands alone, Maiden fans will recognise the continuation of forms like the diary poems, rhythms like subtle off-rhymes and repetitions, and characters waking in diverse settings with a counter point including ongoing dialogues like Tanya and Jane and Hillary and Eleanor. There is also a new poem that picks up the books in the Play With Knives series.  In this case, George and Claire return, baby Corbin in tow, to rescue a Druze child as part of their Prisoners of Conscience work. There is a cumulative meaning in which the books both function as themselves but also as part of a continuing series that is always rich with current affairs but is also timeless in that it harkens back:

Like Jessica,
in The Merchant of Venice, I am always sad
when I hear sweet music. I am so wan in the heart
that I stroke the unconscious Brookings. (“Brookings Follows Us Home”)

As with all of Maiden’s books, brookings: the noun is powerfully astute and thought-provoking, pulling together disparate ideas, deep emotion, and critical thinking and empathy in places where they’re often not found. Above all though, Maiden is a poet’s poet, with a rich lyrical ear. This is work that is as evocative as it is incisive.

← A review of Writers on Writing: Conversations with Allen Mendenhall
A review of Wonder By R. J. Palacio →