Tell us your latest news?

In addition to publicizing The Other Woman, I’m putting the polish on my next Nick Seven spy thriller, The Neon Jungle. I’m also working on a summer short story for Extasy Books, and recently began work on my annual holiday story for them. I freelance as a writer, blogger and editor, and I’m getting ready to launch my own blog site.

I began writing short stories in high school because I was an avid reader and thought “I’d like to write stories like this!” I’ve always been a creative person, whether it’s writing, music or photography. I’m a fan of old-style pulp fiction stories, but what really sparked my interest in that genre was watching classic movies on TV. I would see an old film noir crime caper and if it was based on a book, I’d get it from the library and make comparisons. If I liked that particular author’s style, my mother (who influenced a lot of my reading choices) could usually suggest another author who wrote something similar.

What inspired you to write The Other Woman?

I had released three books in the Vic Fallon private eye series and amazingly, not one murder was ever committed. I had covered every other plot, from blackmail to theft, but no one ever got killed in the process. That seemed like sacrilege for this genre, so I knew it was time to write a Fallon story that focused on someone getting bumped off in the first few pages. Being me, I couldn’t let it go at just that, and had to work in more topical themes and subplots. In this one, the killing du jour is tied in with a government conspiracy, cover-ups, and political payoffs. Can anyone say “Ripped from the headlines”? 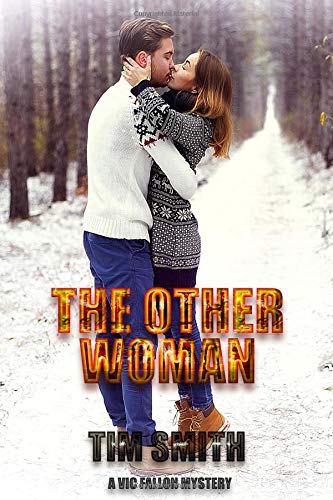 Vic Fallon is a former police detective who was wounded in the line of duty and took a disability separation. He became a private investigator and lives in Sandusky, Ohio on the Lake Erie shore. Each story has him getting involved with a different woman as part of his current case. When I conceived the character, I wanted to bring the classic gumshoe into a contemporary setting. I was also thinking of the TV shows I’ve always enjoyed, like “Peter Gunn,” “77 Sunset Strip,” and “The Rockford Files.” The main difference here is that when things get hot and heavy between the hero and the leading lady, I don’t cut to a commercial. I’ve included the classic elements, like a buddy on the police force who provides help, quirky supporting characters, and vivid locations. If I could have added a cool jazz score by Henry Mancini, I would have.

Some of my personal experiences may find their way into my stories, whether they’re about spies, private eyes, or contemporary romance. In the case of “The Other Woman,” the kick-off to the story was one of my “What if…” moments. I was returning to Dayton, Ohio from a trip to the Florida Keys, and had a long layover in the Atlanta airport. I was passing one of the departure gates when I recognized the Ohio Attorney General, and we spoke for a few minutes. When I was devising this story, I remembered that encounter and thought “What if Vic Fallon runs into a U.S. Senator from his hometown, and he turns up dead in the men’s room shortly after they speak?” That got my brain working on various subplots and motives.

What was the hardest part of writing your book?

Since there are more legal aspects to this story than I usually include, I had to do a lot of research into the criminal justice process. I knew the basics but there were some finer points of the law I needed help with. I’ve found that one of the toughest parts about writing a mystery is creating something believable, with enough “Gotcha!” moments to keep the reader interested. Accuracy is always a challenge, too. In this age of in-your-face TV shows and digital literacy, you need to have your facts straight or someone will call you on it.

Do you have a specific writing style?

My style can best be described as a cross between Raymond Chandler and Carl Hiaasen, with a dash of Mickey Spillane thrown in. I like to incorporate as much realistic atmosphere and detail as I can. The last thing I want is to describe a location and have someone wonder “Has this guy ever been here??” My heroes tend to fall into the wisecracking tough guy mold, with a cynical outlook on life, but enough morality to make them likeable. I try to go for laughs to alleviate the tension. Many of these chuckles come in the form of dialogue and skeptical observations from the hero. When a character tells Fallon that he doesn’t care for his attitude, Fallon’s comeback is “I don’t much care for it myself. I sit up and worry about it on nights when I can’t sleep.”

If there is, it was probably unintentional, because I don’t like to mess up a good story with a lot of preaching. The basic message in The Other Woman is about someone standing up to do the right thing, even when they’re told to stay the hell out of it. Personally, I think this is something we should all do. My books may contain a subtle commentary on the human condition, but I try not to beat people over the head with it.

Creating a realistic romantic relationship is always challenging, because it’s very subjective. What strikes me as cute and flirty may make someone else roll their eyes and groan. It’s fun to write a scene where the couple is teasing each other while watching a sunset on a beach, but it’s also challenging to have them saying something believable that advances the relationship. I also find writing erotic scenes to be a challenge at times. After so many books that you could label “hot,” there are times when I come to one of those encounters and I have to do a mental checklist. “Let’s see…in the last one they did it this way, and in the one before that, I used this position, and then there was the scene with the trapeze…” You see the problem.

I started calling myself a writer when my first novel was published in 2002, but what really drove it home was after my third book was released. I did a book signing tour in the Florida Keys, where many of my stories take place. I walked into a book store in Key Largo for my appearance, and I saw my books on the shelf alongside some Florida authors whose work I had long admired, like James W. Hall and Tim Dorsey. I thought “Smith, you have arrived!”

Do you have anything specific that you want to say to your readers?