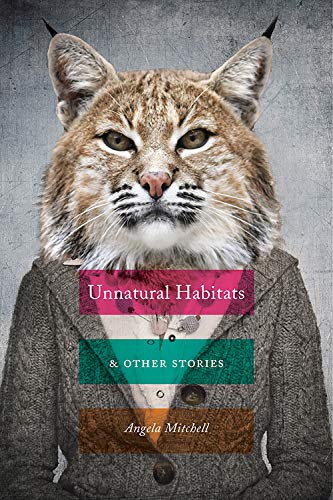 Angela Mitchell’s Unnatural Habitats and Other Stories pulses with a tension that, fortunately, never quite resolves. Most of the stories revolve around Insure-U, the cover business for Layton and Gary’s drug trade, near the Arkansas/Missouri border. When Layton gets severely beaten after a deal gone sour, he blames Gary. The incident sets incites a series of revenges. The remaining stories feature people on the fringes, struggling with addictions and petty crimes.

Instead of anthropomorphizing animals, in this collection, people act like animals. There’s a closeness explored between humans and animals, sometimes wild, sometimes their pets. In one story about a young mother addicted to Oxy, she turns her face from her boyfriend’s meanness, “like I’d do with a wild dog, like if I avoided the eyes, that alone would keep it from lunging into me, snapping me at the neck and shaking me dead” (134). In each story, the action circles and circles around a central deed, like a predator circling its prey. Something is constantly about to happen. A young girl obsesses about a beautiful classmate, Annette, who rides her bus. She plans to steal something from Annette. Annette’s protective dogs turn violent, barring the girl’s stealthy approach to the house. Dee, the Insure-U secretary, thinks about leaving her husband, but her (their) dogs hold her back. When she finally leaves and takes up with Gary, she learns to sleep next to Gary’s pet bobcat. Resolution is hardly calming in these tales; rather, it often means going “au natural”. In the title story, “Unnatural Habitats”, Layton, having had his revenge, makes “himself an offering and a sacrifice to the wild all around” (183). With cunning artistry, the stories craft primal sensations.

A premier collection of short fiction with characters and plots that reverberate with suspense and earthy wisdom.

About the reviewer: Mari Carlson is a violinist and writer living in Eau Claire, WI. When not reading and reviewing, she is likely teaching or practicing violin. She is an active member of area chamber orchestras and folk ensembles.

← A review of Circus By Deonte Osayande
New giveaway! →