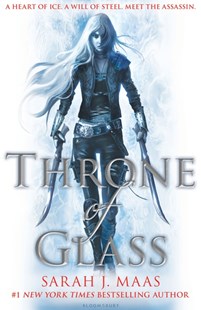 Throne of Glass is a fantasy book about an assassin called Celaena Sardothien who has been in an encampment for a year but now has the opportunity to be free. This book is set in a fantasy land known as Erilea and is set around medieval times. Throne of Glass follows Adarlan’s assassin, Celaena Sardothien, one of the best in the business and known by all.  Celaena was caught a year ago and thrown into the salt mines of Endovier forever or until she breaks and dies. After a year of suffering and punishment, she is chosen by the Crown Prince of Adarlan, Dorian Haviliard, to offer her a second chance at life. Dorian is the son of the King, the man who threw her into the mines.

However, there is a catch. She must win a tournament with 23 other competitors ranging from soldiers in the King’s army to common thieves from nowhere. If she wins she must serve the king for 4 years doing whatever he wants, after that, she is free to go. But when the tournament starts, and competitors start getting eliminated, competitors and noblemen start getting killed by an unknown force wondering the castle killing the competitors one by one over 17 weeks before the final duel who will decide the King’s champion. Celaena must now not only survive her fierce competitors but also whatever or whoever is hunting down the other competitors.

One of the things that worked really well in Throne of Glass was the change of perspectives of characters. One minute I was reading about Celaena’s perspective of a fight she’s in, and then the next paragraph would swap to Dorian’s view of the fight. This helped the reader engage more deeply with the characters and created a better understanding of the bonds between characters and the way each character is feeling about each other during these moments.

The book would be strengthened by better use of visuals. Some of the descriptions, such as those of the ancient symbol, required repeated re-reading and still the image wasn’t clear.  A small image of the symbol would have made this a lot easier to understand.

Overall, I felt that Throne of Glass was a great book, full of interesting twists and a particularly good cliffhanger at the end to entice me into wanting to read the next book. I rate this a 9.4/10 and would recommend this for any young adult looking for a book full of mystery and excitement, particularly a series.

About the reviewer: Aiden Brown was Highly Commended in the Hunter Writers’ Centre/Compulsive Reader Review competition.  He is a year 11 student who loves to read fantasy and sci fi books in his spare time. Aiden is a game designer in training and spends a lot of his time teaching himself how to make a variety of games. He dreams of starting the AAA Australian game development business back up some day in the near future, but until then enjoys going to the beach or movies with friends and family.