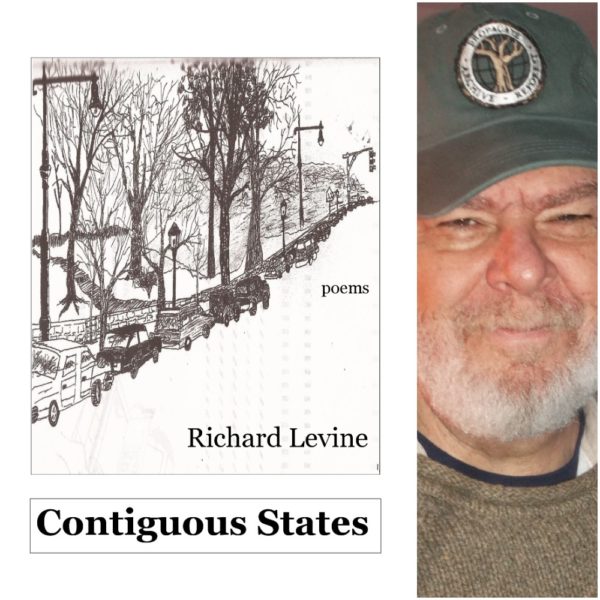 There are poets I have long admired and followed in the publication of their chapbooks but who haven’t put out a full-length collection. Richard Levine is one such poet: a poet of remarkable lyricism and sharp tonal nuance. I have nearly all his chapbooks and so was very happy when I learned his first full-length collection was to be published. And here it is: Contiguous States. Published by Finishing Line Press, it is worth every penny and more.

One distinguishing feature of this collection may not be noticed by the reader right away, and that is it is not a collection constructed linearly. Unlike so many poetry collections, it is not a series of poems building to a point. It is, rather, as its title suggests, a poetry of juxtaposed conditions or states. Such a gathering frees readers to immerse themselves in the collection without feeling bound to a trail of breadcrumbs they must follow to find their way out of the forest. Instead, the destination is everywhere present while nowhere local. So rather than a diminishment of the view, there is an expansion in every quarter. This also allows us to enjoy the music of each poem individually and be surprised by the return of various subjects or themes when they reemerge in other contexts.

There are four sections dealing respectively with war and its aftermath, love, the world, and nature. But these sections, while constituted of clear subjects, are not completely discrete, for they overlap and intersect in places. So, the first section concludes with a poem about a visit to Graceland with the speaker’s wife, and the opening poem in the second section is about a war veteran calling an old girlfriend after returning from war. These juxtapositions, these overlaps and conflicts, draw attention to how much of the collection is about the distance between people, the distance between people and nature, between people and the world. Much of the emotional struggle in the collection is in trying to close those distances.

Meanwhile, I am trying to see
and be in love with my wife as she is,
day and night, in all seasons,
even when the stars are disturbed
by the sexual antics of the sun and the moon.
(“I am a Witness”, 26)

We could not be what we each needed,
and yet we were—with a look-the-other way
kindness that enabled our disabling abilities.
(“Of Kindness”, 22)

Perhaps one of the most painful examples of this is in the poem “Disturbing the Peace.” The scene is a bar where two Vietnam Veterans meet to drink. They overhear two young women discussing the Afghanistan war. Anger erupts over what is essentially the distance between people. The disparity between civilians and those who have been scared by wartime experience, between those who discuss war in political terms and those who see it as “you help with the killing and the killing helps you,” is so large and isolating, one can’t help but see it as a fracture in society itself. The poem concludes and portrays it thus:

. . . and the barroom full of people
with their own stories to tell, a few, no doubt,
fueled by drink, going beyond what can be said
without disturbing the peace. (13)

Such clashes in these poems reach deep into many of the enduring questions about what unites and what divides a people and, thus, questions of society and government, what can justly be expected of its citizens, etc. And yet, this collection goes beyond that. These early poems about the aftermath of war and love are not peculiar in their emotional struggle or other forms of struggle. Later, where the collection turns to nature, we find struggle defined as a “gift” and in a beautiful poem called “The Cadence of Mercy,” the speaker having had to shoot a mortally wounded doe and dump it in the woods, later that night finds

. . . all through the house
and the night and the heavier, steadier rain,
her fawn’s hungry cries called to my own. (57)

So the heartbreaking gulfs proliferate, unavoidable voids that are confronted with a kind of amor fati and the pain of which is salved primarily by the beauty of Levine’s lyricism. He is a poet with an ear tuned to nuances of rhythm and tone, and an eye sharp to catch descriptive and metaphorical elegance, which all make for a beauty that soothe the chasms of hurt or danger so many of the poems explore.

The cage was suspended from the branch
of a dead tree by a wire—that one loosely wound
loop was all that kept the spoon-handle of a grenade
from flying off to eternity.
(“Beauty on the Wing”, 2)

Returning that night to fight fire
with a quick splash of kerosene
and the strike and fling of a wooden match,
I watched Hades consume the hive,
burning it alive and into my pulse—nest
of hexes, village of huts, wheel around a hub.
(“Fire/A Village/A Beauty We Fear”, 51)

While the subjects range from climate change to tending a garden, the structures migrate from narrative to short lyric seamlessly. Every emotional condition is created and unmade simultaneously. It’s the paradox of being human, feeling conflicting things all the time and yet, going on. And perhaps that is the final lesson of this collection, contained in a short lyric poem called “Harvest,” that hangs out at the end like an epilogue. It’s a poem that, on its surface, is about simply gathering what our little garden makes and we live off of in a stew made in the kitchen, but is thematically about how the abundance of our past provides a context in which we live, in which “to share and dare the moment/to believe in all we gather and do.”

It has long been my feeling that Richard Levine should be among the more recognized names of contemporary American poetry. If Contiguous States—his first full-length collection in, what I hope, is a series of them—does not bring wider recognition to this poet, it is certainly not for a lack of deserving it.

About the reviewer: Michael T. Young’s third full-length collection, The Infinite Doctrine of Water, was published by Terrapin Books. His chapbook, Living in the Counterpoint (Finishing Line Press), received the 2014 Jean Pedrick Chapbook Award from the New England Poetry Club.  His other collections include The Beautiful Moment of Being Lost (Poets Wear Prada), Transcriptions of Daylight (Rattapallax Press), and Because the Wind Has Questions (Somers Rocks Press).  He received a fellowship from the New Jersey State Council on the Arts and the Chaffin Poetry Award.  His work has appeared or is forthcoming in numerous print and online journals including The Cimarron Review, The Cortland Review, Edison Literary Review, Lunch Ticket, The Potomac Review, and Valparaiso Poetry Review.  His work is also in the anthologies Phoenix Rising, Chance of a Ghost, In the Black/In the Red, and Rabbit Ears: TV Poems.  He lives with his wife and children in Jersey City, New Jersey. Find out more about Michael at: https://www.michaeltyoung.com

← An Interview with The Arsonist’s Chloe Hooper
Word Thrill: A review of Stranger Inside by Laura Benedict and The Woman in the Window A. J. Finn →