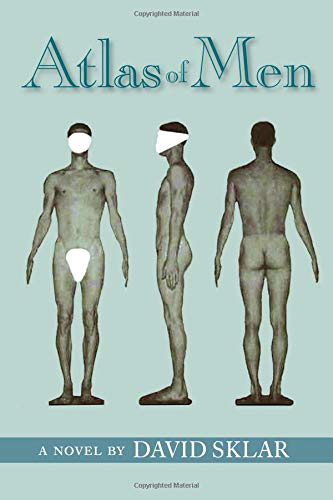 In a riveting, often chilling and poignant story of transcendence, physician and author David Sklar draws upon his own experiences in crafting an ambitious new publication, Atlas of Men. Atlas of Men is a heartfelt fictional version of a true-life scandal involving nude photographs of teens and young adults taken as part of sordid, so-called scientific research —a study Sklar was an unwitting participant in as a teen.

The book is a marvelous genre-blend, defying any easy categorization. While the plot often contain the suspense of a great medical thriller, the slowly unraveled mystery in the heart of the story focuses on boys coming of age in an elite all-male boarding school—but a boarding school with some scandalous secrets above and beyond the nude photographs.

Flashback sequences to the school also tell an engaging, touching tale about a young love which tangles Robert, his best friend, and a young female into a righteous mess. Decades later, the hope that Robert and the woman might get a second chance at romance is a small, but sweet part of the book also.
So where would one place Atlas of Men in a book store? On a shelf with medical thrillers by such authors as Michael Crichton? Or nuzzled up to Dead Poets Society and other boarding school gothic on a different shelf? Hard to say into which niche Atlas of Men might go, but this much can be said with certainty: It’s a great read, with compelling characters, page-turning pacing balanced with contemplative passages, and an often gut-wrenching plot about what happened to those students at an upscale boarding school in the 1960s.

The fictional nude-photograph-scientific project in the book is based upon actual research conducted by the long discredited (and deservedly so) Dr. William H. Sheldon, a constitutional psychologist, and his cohorts. Dating from the 1940 to the 1960s, nude photos were taken of students at such places as Yale, Mount Holyoke, Vassar, Smith or Princeton. These nude photos were taken as a strange part of Dr. Shelton’s so-called scientific studies in somatotypes, a theory that character (and success in life) is related to one’s body type and build. As summed up by journalist Ron Rosenbaum in a New York Times article, these nude photos were part of a “vast eugenic experiment run by scientists with a master-race hidden agenda.” Rosenbaum’s newspaper article, “The Great Ivy League Nude Posture Photo Scandal,” first appeared in the New York Times on January 15, 1995, but is now digitalized and available on line at https://www.nytimes.com/1995/01/15/magazine/the-great-ivy-league-nude-posture-photo-scandal.html. According to Rosenbaum, important people from these Ivy League schools who went on to become public figures in government and highly successful professionals were subjected to this nude photography.

Inspired by these true events and the impact on his life, author David Sklar—an emergency physician, researcher, and professor—writes from the heart and the mind with a broad scope as he tells his story. The author states that he too was subjected to the nude photography and somatotyping as part of a so-called research project while a student at an elite New Hampshire prep school.

While the story he penned is fiction, Sklar is following the old writers’ workshop mantra “write what you know.” Given that, it’s no surprise that the narratives and dialogues ring with authenticity. With his crisp, on-point and well-worded sentences, Sklar takes readers right smack into the heart of the story—and into the heart and mind of the protagonist, the enigmatic, brilliant, and conflicted Dr. Robert Thames. Many emotional and philosophical issues tear at Robert—both as a grown man and as a boy in the flashback sequences. These conflicts make him a fascinating anchor for the whole book.

As an adult, Robert is a medical doctor specializing in infectious disease research, not unlike the author himself. Born in the Philippines of a Filipino mother, Robert is adopted by American medical missionaries who live there. His adoptive parents love him, but they shield him from knowledge of his real parents. When Robert becomes a teen, his parents send him to the USA to a mostly-white, upper crust all-boys boarding school (modeled after the author’s own alma mater). As a dark-skinned foreigner, he does not fit in with the rich white teen boys and their sense of entitlement. But an analytical talent for playing Bridge brings him into a small circle of other outcasts, including an African-American, a brilliant scientific teen lacking in social skills, and a troubled, privileged kid who becomes Robert’s best friend. The growing friendships give the story much warmth, and offer a coming-of-age quality to the book as the boys struggle to mature.

As the story opens, Robert, as a never-married and somewhat lonely adult several decades past his boarding school days, works in a government research job and learns his position is to be cut due to funding issues. Soon after that, he mysteriously receives three boxes of old records pertaining to the unethical research conducted on him and his classmates at the boarding school. Painful memories resurface, and he decides to pursue the matter further. As part of his own investigation, Robert tracks down his four closest friends from the school—the boys he once played Bridge with. Together, he hopes they can uncover the truth of the so-called scientific research, long buried by the faculty, the school, and many of the boys themselves.

Robert locates the man who was his closest friend at the school and who is now married to the girl Robert had fallen in love with while they were all teens. To Robert’s dismay, he learns that this former best friend is dying. As a last request, his friend asks Robert to bring together for one last time their group of close Bridge-playing classmates from their school days. Robert agrees, though he is unsure how to locate one of them.

As he searches out the friends from the boarding school, Robert is not only driven to reunite the friends for one final time, but also to bring some peace to himself and his dying friend. But he encounters threats and discouragement from the school’s officials once they learn he has the boxes of research—and is asking questions about the nude photos. The school has much to lose if Robert publicizes the materials and the knowledge he has gained since reviewing the boxes.

Told in a combination of contemporary times and flashbacks to the boarding school days, Atlas of Men moves at an energetic pace, building suspense and compassion for the boys who were humiliated in the name of science. The flashbacks to when the boys were required to strip completely naked in front of classmates while they were individually photographed is distressing, but told with candor and empathy.

What becomes of the naked photographs in the wrong hands provokes anger, and Robert struggles with a desire for retribution and revenge. But he also understands much harm –including embarrassment and injury to innocent persons—could result if he goes public with what he has learned. Robert’s internal conflict over whether to expose the school for its past sins creates a compelling element of the book.

Atlas of Men raises important ethical questions about research with live human subjects and science’s relationship to race and identity. There are serious philosophical and cultural issues at play in the book that give it an added depth. Additionally, it is a well-written, compelling story about scandal and secrecy at a prestigious private school and of the boys who, as men, transcend what happened to them while students there.

Atlas of Men has a number of smaller story lines interwoven with the main story that add rich layers to the book. For one example, Robert’s research takes him to Africa, where he has a disturbing encounter at an under-funded, understaffed rural medical facility. The resulting connection between Robert and a doctor at the African facility could be a great subject of a second book.