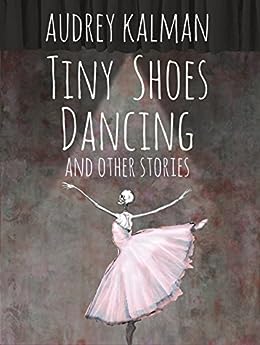 In her first short story collection, Tiny Shoes Dancing, Audrey Kalman presents, with artistry and insight, a variety of complicated relationships.  Sixteen of the twenty stories have been published in literary magazines.  Some are little gems, like “So She Says”, a short-short reminiscent of Ernest Hemingway’s “Hills Like White Elephants.” In “If Only You Weren’t So…” captures in two pages the conflict between a judgmental father  and a long-suffering, self-critical mother in conflict with their troubled son. The mother thinks, “with a mixture of awe and sadness, how a relationship taxes the soul in equal proportion to the joy it yields.”

Others stories are comparable to those of Alice Munro in that they allow for considerable character development.  In “Skyping with the Rabbi”, Jake is preparing with Rabbi Miriam for his Bar Mitzvah while his parents are at odds. His mother, raised secular, thinks that his father “wants to inflict on his son the same rituals he had to endure.” Rabbi Miriam, who has a pet rat, is low-key and understanding; through her, Jake progresses toward maturity.

“The Bureau of Lost Earrings” and “Mistress Mine” are clever and funny, with sad undercurrents. In the former, sixtyish Hilary, who had her ears pierced at sixteen, thinks of the large earring collection she had before her grandmother’s antique jewellery box went missing in a move.  She remembers single earrings, their mates lost, often at times when she too was losing a mate.

Sometimes having pairs has been trying. Her husband once bought her identical pairs of expensive earrings so she’d have replacements if she lost one. They aren’t her style, but were chosen to display wealth. We read: “She’d have to lose three of the earrings to put both pairs out of commission.” The story comes to a satisfactory conclusion when Hilary finds an earring recently lost, a curlicue, which suggests that her life is coming full circle and that she’s recovering her lost self.

“Mistress Mine” begins with a first person narrator watching a woman run. Is he a stalker? Certainly not one who tries to keep hidden, for he sits on the grass a few yards from her car and watches her coming toward him.  “I can smell her now and I think I must be in heaven,” he says, “breathing the musk of her sweat, which I had always liked but never knew could be so all-encompassing and piquantly her.”

Something odd and intriguing is going on here. Why doesn’t the woman recognize the observer, and why are his senses enhanced? Another day, when he “trots” beside her, she says, “Where’d you come from? Go on home.”   When he forms her name in his head but can’t speak it, and when she says, “What’s a matter, pup,” we get a clue and feel a pull to read on and discover the cause and consequences of this state of affairs. Though the story is amusing it is also sad, as we gradually realize that the friendly devoted narrator, because of  his nature, can’t attain what his heart desires.

Other stories also involve surprises, such as “Untitled Erotica”, where the action, mainly psychological, takes place mostly in a cafe.  Forty-nine year old Judy meets there with a younger man named Hermann, who turns out to be, not her lover, but her agent. At loose ends after her children left home, Judy wrote an erotic story which was well-received, and now Hermann is helping her build a career in the erotica genre. Married for twenty-eight years to Stone, she has “undergone a process which seems the reverse of sexual awakening”. With this new project, however, she has tapped into buried feelings, and her passion pours out in her writing. Then something unexpected happens.

Ruth Latta’s latest novel, Grace in Love, is available through info@baico.ca. Visit her blog at http://ruthlatta.blogspot.ca.