A tale of obsession and revenge, in this first book of the Al Shabah Assassin Series, Paul ultimately finds himself on the trail of a childhood nemesis who had become the feared charismatic leader of a violent jihadist group. This fast-paced thriller takes Paul around the world in his personal search for truth and justice, and a final showdown with a yellow-eyed terrorist who one violent day ended Paul’s childhood and set him on the road to becoming an assassin.

A.E. Sawan was born into a Christian family on the outskirts of Zahle in Lebanon’s Bekaa Valley. By the age of 12, he and his family had been forced to move five different times because of the country’s shattering civil war (1975 to 1990). Detained and tortured on several occasions by both the Syrian Army and the Palestinian Liberation Army (PLO), he eventually became a counter-terrorist operative specializing in defusing bombs. Having survived the war, he severed his connections to violence and left Lebanon for Canada. 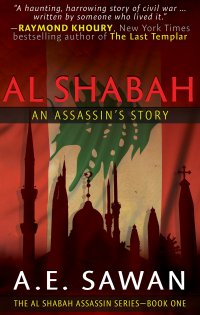 Al Shabah: An Assassin’s Story is your debut novel. Can you introduce it to us?

Paul’s ordinary boyhood is shattered when the Lebanese Civil War comes to his hometown in the Bekaa Valley. Some of the experiences in my book are based on my own life as a Lebanese native, having grown up in similar circumstances as Paul, the main character. The book covers the early moments of Paul’s life.

Your novel is labeled as historical fiction. What inspired you to revisit such a difficult period of your life through fiction?

For many years I tried very hard to forget about my past. When I was 22 I moved to Canada to start a new life. At that point, it was as if I left my younger self behind in Lebanon. Then at a get-together with some Lebanese friends, the men started talking about what they had done during the war. I didn’t say anything. Then my cousin pointed at me and said, “You should ask him! He was undercover for many years in enemy territory.” Everyone was shocked, including my wife, who didn’t know that part of my story. She encouraged me to talk and write about my experiences, which is how the book happened.

I understand that some of your book is autobiographical. How did you blend non-fiction with fiction?

The events of the Lebanese Civil War really happened. My family and I lived through them. People who know me think the book is a memoir, but others are sure I made it all up. Could someone make all that up if he hadn’t lived it?

Can you talk about the challenges that went into writing about such a difficult period of your life?

To make the war real for readers, I had to remember it and relive it myself. Once I started writing, I had trouble sleeping. Images and sounds would come back to me. Sometimes I even heard the voices of my fallen friends. I would wake up and walk around the house in total darkness, trying to be quiet so as not to wake my family.

What did you learn while writing your first book?

After so many years and a new life, I started looking at myself in the third person. I was amazed that I survived and even thrived after experiencing such violence at such an early age. Writing a novel also required more discipline than I realized. It’s like training in martial arts—it’s harder than it looks!