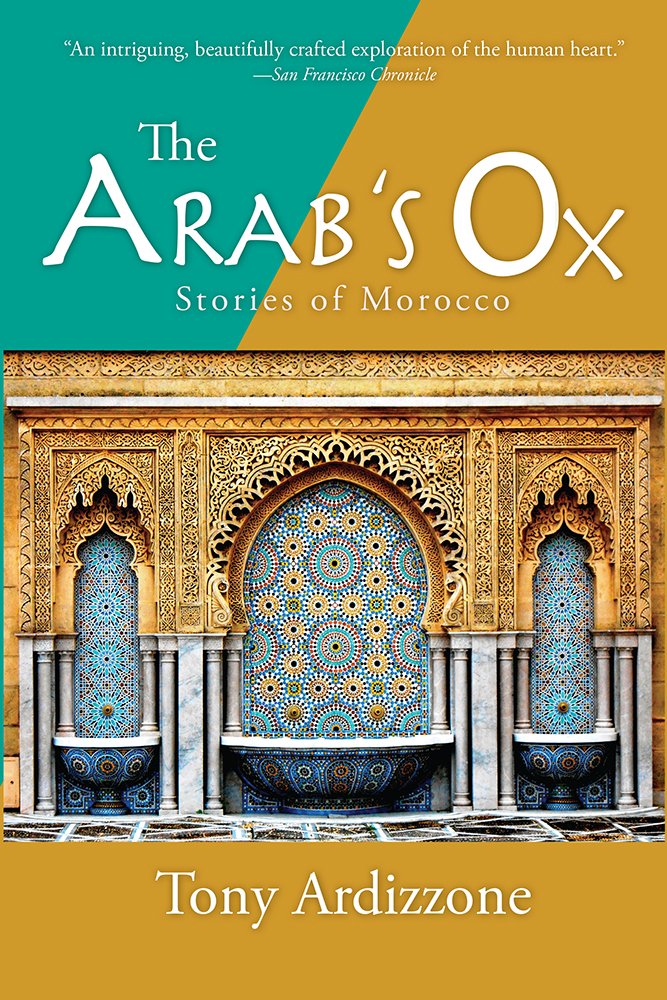 In this reissued release of Tony Ardizzone’s second collection of short stories, he rolls out an exquisite carpet for our arrival into Morocco – and into the depths of our own souls.  With the changes in Morocco since the book’s original publication twenty five years ago – a new king, The Arab Spring, terrorist attacks, protests, land negotiations with Spain, the immigration crisis, among others –  Ardizzone’s questions about what it means to be open to another culture, and one’s own, are relevant now more than ever.   In the first tale, in which their bus from the Casablanca airport hits an ox, we’re introduced to the cast of characters featured in the subsequent stories.  Henry, an American tourist with stomach cancer, Sarah, a native of Chicago travelling alone, and Peter, a history professor setting up an exchange study, each confronts what brings them to Morocco before they can welcome what Morocco has to offer them.  Ardizzone offers us readers not only a glimpse of this beautiful country, but characters at crossroads, intricately and beautifully drawn.

The first story is a prism for understanding all the others. Confusion, fear, and awe ensue when the bus strikes the ox.  It had come out of nowhere, just like the prospect of Morocco comes out of nowhere for Henry, Sarah, and Peter, the Americans on the bus.  Henry, looking for an adventure before his stomach cancer gets the better of him, lands on Morocco by chance.  Sarah goes because everyone said she shouldn’t since the boyfriend she’d planned on going with is out of the picture.  Peter volunteers to go on behalf of his university because he thinks it will benefit his career, not because it’s Morocco.  While the Americans take pictures of the accident, an amusing first anecdote on their adventure, the Moroccans have to deal with the ox.  The boy who witnesses its fall has spilled the milk he was delivering and will be in trouble.  The bus driver might lose his job.  How will the Americans come to care about the consequences of this journey, this foray into foreign land?

Morocco stands for something to each of the characters.  In order to decipher this symbol in their lives, they must look inward. They each arrive at a turning point in which Morocco speaks back to them, helps them discover its meaning to them.  For Henry, Ahmed becomes his guide not only to various Moroccan sites, but to his own mortality.  Rosemary, an American ex-patriate, a grizzled but classy woman, sees her younger self in Sarah and tries to steer her toward a different future.  Peter, whose background resembles the author’s, befriends his counterpart in the study exchange, Mohammed, and his wife Aisha.  Morocco, for Peter, is a chance to right his former wrongs.

Ardizzone masterfully weaves together these characters’ individual stories with a portrait of the Moroccan people.  He sets vivid descriptions of street scenes alongside his characters’ thoughts.  Peter wonders to himself, “What had he done to have lost her [his wife]?  What hadn’t he done?  He pulled in a sudden breath, gazed across the traffic at a man in a dark blue business suit and red fez walking past the first row of tables outside the Hotel Balima” (155).  Morocco implants itself in his inner life.  In the final story, another Peter tale, he negotiates the sale of a carpet for his new home, but no sooner does he buy it than he’s asked to set it down with all the other rugs to welcome the king back from his travels.  Peter’s purchase becomes baraka, a kind of spiritual communication between The Other and himself.  With it, he begins to embrace a new life.  So, too, Ardizzone’s book is a mediator for readers, leading us into a magical, yet very relate-able world.

About the reviewer: Mari Carlson is a violinist and writer living in Eau Claire, WI.  When not reading and reviewing, she is likely teaching or practicing violin.  She is an active member of area chamber orchestras and folk ensembles.