The Obsidian Gates is the second book in your Heart of Warrior series. Can you catch readers up on where you left off in The Lords of Valdeon?

Seth is the new Bearer of the Lion Ring. He and his squire, Riley, are on the run from the same blood thirsty creatures who murdered his father – Edmund the Leo. Escaping Marianna, with the help of Xavier the Wolf, they set sail aboard a cargo ship headed toward the mainland of Andara. Seth is determined to find answers about his parents and the family behind their murders.

Julian, after arranging Edmund’s murder, continues his attempts to kill the new Bearer of the Lion Ring. He tries to pursue Seth, but is stopped by the invading Jackal. Julian is taken to their command ship to find he’s been outsmarted by the Jackal General, Lord Gorman. Hopes of seizing the throne of Valdeon begin to Dwindle. Julian isn’t one to be easily stymied. He begins plotting for new ways to exact his revenge. 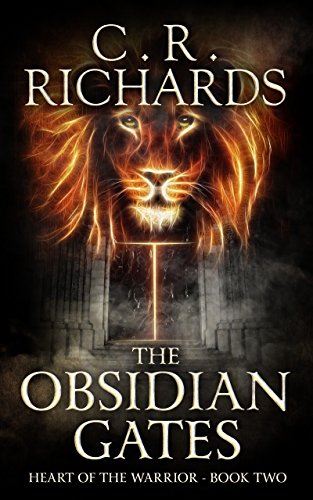 What do you think will surprise readers most about this new chapter in your series?

The main characters in the series are devastated by loss in book two. They have their homes and their loved ones torn away by invaders. I think the readers will find encouragement in their ability to endure through all the trials they face.

Was there any special research you conducted while writing The Obsidian Gates?

I love doing research and had several topics to pursue in this book: old schooners and potential designs to turn them into airships, basic military ranks and protocol, and my favorite – visiting Key West for location ideas.

Epic Fantasy’s take big imagination! Can you tell us how the Heart of the Warrior series came to fruition?

All my story ideas start with one pivotal scene I envision in an intense and vivid dream. The first seed of an idea for the Heart of the Warrior Series came to me when I dreamed of a boy from the 18th century. He was kneeling beside his mother’s grave in a cemetery beside a high seaside cliff. A strange man joined him there. The scene made me wonder who the man was and his relation to the boy. They were strangers. I could tell from the man’s dress, he was a foreigner.

I began to ask several “What if” questions to flesh out the story: What if the man was the boy’s estranged father? What if his mother had hidden him in the remote village? WHY? Who are these people and what brought about the tragedy that bound them to one another? I wanted to find out and the only way to get to the truth was to write the first book.

What fascinates you the most about writing?

The act of creating art – whether it be writing, music or visual art – is a miracle. We begin with a blank surface. The object we create when we’ve finished isn’t done by the holder of the pen or the brush – something guides our hand.

I’m always fascinated when I go back and read a passage out of the novel I’m working on. Very rarely do I remember writing the words. It’s almost as if my mind goes and retrieves the story from another realm. I think, perhaps, this is the reason I work so hard to finish each story. I don’t know where they come from or why they come to me. I just know I’ve been given the responsibility to bring them out and make them available for everyone to read.

Was that part of what made you want to pursue life as an author?

I’d always dreamed of being a writer. Unfortunately, I gave up on the dream for many years while I pursued other careers. Eventually I became a miserable and depressed mess. I turned to the one thing I knew would make me happy. Once I picked up my pen and paper again, I never stopped.

People glibly throw around the term, “Living the dream.” I am living my dream. I can’t wait to get out of bed in the morning and share my unique vision with the world via my stories. It really does make a huge difference in your life. Purpose gets you out of bed in the morning with hope and happiness. It makes your outlook positive and productive.

Who has influenced you the most in your writing?

My father was an amazing person. He lied about his age to join the army during WWII. Dad was captured and taken on the death march. He faced hard challenges his entire life, but he always kept trying. He taught me to be tough and to work for what I want in life.

Dad was also a beautiful artist and a writer. He never sought fame, but was always supportive of his creative children. Though Dad passed away several years ago, I still hear his voice in my head during those hard times. Keep going. You’ll make it.

Have you ever had a mentor, or someone who sparked your passion?

I’ll never forget the year New York Times Best Selling author Joseph Finder came to the Rocky Mountain Fiction Writers conference here in Denver. He is so kind and supportive – no matter the level of success he achieves, he remains genuine. His workshop changed my outlook on writing. He told us our first draft of the book would be terrible. Accept it. Then just write the crappy draft (his words!). The important thing is to finish. You can correct all your mistakes later. Essentially, he gave me permission to not be perfect. My books can never be perfect, because I’m an imperfect human being and that’s okay.

What kind of other works (books, scripts, poems etc.) have you had published?

I coauthored a horror romance novel (out of print), before deciding to go out on my own. My first solo dark or urban fantasy novel, Phantom Harvest, was traditionally published. The three books that followed were all Indie Published: Lost Man’s Parish, Pariah and The Lords of Valdeon. I’ve also been a freelance journalist and columnist in local newspapers and entertainment magazines.

What’s next for the Heart of the Warrior series?

Book Three (In the works right now) takes the story to an isolated marsh where Seth must search for the fabled “Creed of the Guardian.” It won’t be easy. Their outpost is surrounded by treacherous bogs and fierce predatory creatures.

The perils outside the walls of the outpost can’t compare with the dangers from within. Many of the rangers in Seth’s new battalion have seen his raw power. They fear he will lose control of the destructive force of the Lion’s Roar. Others fear what his mixed blood means for the future of the Legion.

Only by finding the Creed of the Guardian can put their minds at ease and restore the Jalora Legion’s hope.

Drop by
a Rafflecopter giveaway