Since its inception, the mainstream Australian Literary industry has seldom published Spec-Fiction novels. Spec Fiction is a broad term that applies to an equally broad array of genres, sub-genres and cross-genres, encompassing works that go against the grain, that subvert expectation and strike away from the more traditional, easily identifiable works such as those belonging to that of the crime genre. These are the works of fantasy, of sci-fi, of horror and anything and everything in between, the self-same works that have largely suffered from being misunderstood, maligned even, and branded as too niche and therefore, unworthy of publication. 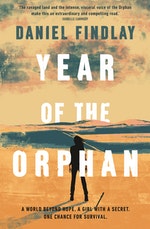 Such stony silence on the publishing front precipitated a movement of like-minded folk banding together to form a vanguard of small independent publishing houses. The overwhelming demand they faced far exceeded their limited means, resulting in many a proudly, veritably Australian spec-fiction novel never seeing the light of a publishing day.

The release of Daniel Findlay’s debut novel, Year Of The Orphan, suggests that we may now be on the cusp of a new era, one in which epic titles of this ilk receive the proper attention and accolades that they so richly deserve.

We begin by discussing how he came to write Year Of The Orphan. ‘The seeds for this were planted a long time ago, in my history studies,’ he says. ‘I think I first read about Maralinga [a nuclear testing site located in rural South Australia] and that was fascinating to me.’

More than just being inspired by the real-life stories in which he had happened across throughout his schooling days, Findlay also found himself gravitating towards the genre through devouring some of the classics, including two of the most well-known – Riddley Walker’s The Chrysalids and Cormac McCarthy’s The Road. Rather than being put-off such an endeavour after reading some of the best there is, Findlay found himself even more inspired. He lastly cites a picture that he found as striking the match of what would eventually become Year Of The Orphan. ‘I can’t find it to this day, this illustration of a young girl, done in sort of an anime style, and she’s sitting on top of a pile of rubbish.’

With that arresting imagery secured into his mind’s eye, Findlay next spent several more months researching. ‘I went and bought as many books as I could. Learnt the tropes, learnt the clichés. Learn all the things. I knew that I already loved the genre, but I needed to broaden my knowledge. I still didn’t really have a great idea of the character, but when I sat down to write, she was just there.’

Despite conducting all this research and compiling a list of conventions and constraints, the author knew that he didn’t want to just produce more of the same, but instead, something with elements and aspects that had never been explored before.

‘Part of the fun, for me as a writer, is creating things that the characters don’t understand. Having that moment where you, the reader, recognise a space-ship, but they’re just looking at some weird relic of the past. That’s something I really enjoy, so hopefully, I’ve managed to write something that’s different to what I’ve read.’

One of the main differences readers will note that distinguishes Year Of The Orphan, is how Findlay has chosen to lay out the entire story – the way in which we are introduced to the titular Orphan, follow her from being brought into the System after tragedy strikes her family with an attack by the menacing Ghosts, to the way in which she is taken in by the Old Man, mistreated by Karra and befriends Block, all leading toward the epic climax is not done so through any traditional, linear narrative.
‘I felt a bit nuts sometimes, because there were so many different characters and so many different timelines. During the editing process, sometimes I had to add more. That kind of had its own challenge, because to replace something here it means you’re affecting something down the line there. Close to fifty thousand words were done in a month. And then, the next thirty thousand words took three months, just to write an ending.’

In addition to the unusual way in which The Year Of The Orphan is presented, the story itself is told with a slang vernacular, almost a phonetically spelled way of writing that is seldom exhibited outside of the works of Irvine Welsh. This was another trait that could potentially hinder a first-time novelist, yet Findlay assures that this is the way he had always planned to write it. One would wonder if he relied heavily on a self-devised dictionary as a reference guide, or did he originally write the first manuscript with the normal spelling and change it later?

‘No, I just wrote in that style, that was her voice, that was how everything came out. What did happen, is that I started off, probably softer in that voice and as the story went on, I got more and more invested in it, I became more confident. And when the time came to edit it, I just had to make sure that the beginning was as strong as the ending.’

The voice, in particular, served as the driving force through which Findlay crafted his inimitably Australian tale. ‘One of the big aims for me with this book was to make it Australian. There’s nothing, for me, that sets a book where it is more than the voice of the protagonist. I hadn’t read enough Australian dystopian novels.’

Now that Findlay had addressed how he went about tackling a non-linear story with a lexicon he himself had created, we delve more into his writing process, which also proves to be unique, with origins traced back to trying out The National Novel Writing Month. ‘I had a crack at it one year, and I failed miserably. So then, I kind of licked my wounds a bit and I thought – OK, if I’m really going to attempt this, I need to treat it a bit more seriously.’

With purpose reaffirmed, Findlay spent the interim poring over all the dystopian and post-apocalyptic books he had purchased, researching and readying. When that fateful date finally rolled around he began in earnest. ‘It worked out at about 1600 words per day, but I wasn’t consistent, sometimes I would do a hundred, sometimes I would do ten thousand in a weekend. Then I had fifty thousand by the end of the month, it was such a good feeling.’

He’s quick to point out that what had been produced was promising, but still required a gargantuan amount of work to make it presentable for the discerning eyeballs of literary luminaries. ‘I mean, it was rough as guts,’ he confides with a chuckle. ‘It didn’t have an ending, but there was this big chunk of writing and I was proud that I had made it to the end.’

Eventually, his polished manuscript caught the notice of one of the senior commissioning editors at Penguin Random House. ‘I was quite lucky in that they picked it up.’

The author was first astonished by the team’s response to his work, in that they were used to much more “bloated” manuscripts, as compared to his already lean and taut submission. ‘I had to write more, rather than cut things out,’ he puts this down to his long-standing career within a related journalistic field, where brevity is the name of the game. ‘I was probably ruthless with the scalpel. I was slicing things back to the bare, bare bones.’

He found the process of the complete revamp of the manuscript equal parts delightful and fascinating, due in no small part to utilising the sterling team of seasoned editors, among them Kate O’Donnell, who Findlay attributes to the strength of the final product. ‘So that structural edit, I did under their auspices. I had Kate, I’m so in awe of her. Every line of the 80,000-word manuscript had all these helpful comments from her. Really, really incredible stuff.’

Findlay also heaps praise upon commissioning editor, Lex Hirst, who proved instrumental in realising the novel and its scope. ‘Lex is just a powerhouse, she has championed this book, she is a fan of Spec Fic, she is part of the revolution because she believes in the genre and the interesting possibilities of it. It’s all down to the bravery and the open-mindedness of the commissioning editor; they also have to be there. It might sound cliché but there really is a team behind this book. There’s my name on the cover, but there’s really a whole lot of people that put this together and so much into it.’

Prior to his catapulting to the forefront of published Australian spec-fic, Findlay had accumulated knowledge from established authors he interviewed over the years. He recalls some invaluable advice imparted to him. ‘It was given to me by Patrick Ness,’ the American Young-Adult fiction author has had a spike in popularity now thanks to one of his novels, A Monster Calls, being adapted into a major Hollywood film. ‘He said – just do a bit every day. Every single day. Can be a couple of hundred words, can be ten. But after a few months, you’ll have something and it might be really rough, but it could lead to something if you want it to.’

He also reveals another underrated one that he has heard repeated from the lips of countless literary luminaries, fellow writers and literary agents over the years, which particularly applies to those penning spec-fiction within a market still dominated by AusLit titles. ‘When you are sending your stuff out to publishers, do your homework on who they are. You’re just going to break your own heart by sending out ten submissions and not hearing back from any. Chose one that does what you do and jump for them. If you choose your publisher carefully, you’re automatically improving your chances and there’s so many independent publishers that might just adore what you do.’

Many figures from the Spec Fiction writing world mingled at the recent festival held at the New South Wales Writers Centre (NSWWC). Findlay opines that the immense popularity of the festival is demonstrative of a nascent sign of things to come. ‘It was sold out, here’s a crowd of people who love it so much they are willing to pay and go and see writers speak. What I love about genre fiction, and spec fiction, is that you can find people who love what you love, an online community and such, quite easily, those that have a shared passion, for whatever it is that you’re into.’

Year Of The Orphan is one of the first forays by a major publishing house in taking a chance with a title decidedly of the Spec-Fiction genre. Judging by the novel’s tremendous popularity thus far and a similar festival now in the works for Melbourne next year, it’s clear that we are entering a glorious new era where those that are writing weird tales are both finding their contemporaries and simultaneously ascending to their rightful place within the Australian literary landscape.

About the interviewer: Samuel Elliott is a Sydney-based author that has been published in Antic, The Southerly, Compulsive Reader, MoviePilot, Writer’s Bloc, Vertigo, Good Reading, FilmInk, Veranadah, The Big Issue and The Independent. He is currently working on his novel series, ‘Milan Milton: Heiress’ in between completing a degree and working two jobs within the television industry. Find him at:
www.facebook.com/samuelelliottauthor