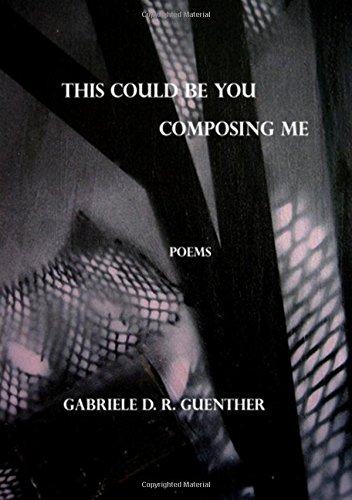 From the very title of Gabriele D.R. Guenther’s impressive and startling new book of poems, This Could Be You Composing Me, we are asked to examine the evolution of our lives from the tiniest minutia of our interactions. This extends to both human relationships and the world at large. Guenther measures our intimacies with a fine eye, questioning where each of us ends and another begins. We permeate one another’s lives to the point of altering our psyches, morphing into shared experiences and, essentially, redefining one another. We are marked indelibly by the inheritance of lineage, the unguarded, innocent moments of childhood that begin to imprint us with burdens, expectations and loss. “In That House”, one of the earlier poems inadvertently omitted from the Table of Contents (which corrects pagination beginning with Section Two), describes three sisters creating their own world while “Upstairs, a territory possessed,/A woman calling for her children/to relieve her from duty” (P. 9, ll. 5-7), and concluding “…you and I, and Bernadette, played/with whispers/that collected like veils on our beds” (P. 9, ll. 16-18). In the heart-wrenching poem “The Mouth”, we see the effects of disintegrating hopes within the confines of domestic demands and lost relationships as the narrator, a child of six, sees her mother “…lay in bed, motionless from the waist up/as if treading water” (P. 17, ll. 4-5), and her father “…an arm with no body, eating/yams. Swallowing whole/his wife’s luminous vigil” (P. 17. ll. 23-25). Devastation and loss are dissected with the most astonishing and subtle attentiveness and specificity.

Thus the early wounds begin to implant themselves, setting us up for how we will choose to interact in and navigate our lives. “The Planet God” moves on to more sinister intrusions: “But when the child sleeps,/he comes and lays/one hand like a fossil/on her chest” (P. 13, ll. 3-6), and in “Incest” there is overt reference to these abuses. Later the sisters visit “that house” once a year at Christmas, one sister trying to revisit the past while the other tries to stop her from attempting to recover any possible comprehension of those memories, to keep her “From splitting your tongue/on the edge/of what a parent/should have offered first” (P. 12, ll. 15-18). There is direct reference to familial transgressions linked to our ongoing efforts at connection as in the opening lines of “Amenities”: “On Friday, my lover’s telephone voice/arrives from Karlsruhe, startling me/in the act/like a parent’s raised hand” (P. 53, ll. 1-4), the connection being “…thick with a debris of sighs/beleaguering both ends” (P. 53, ll. 14-16). She sums up familial dysfunction in the piece “One of those moments”, describing it as “…this mess of symmetry/we call family.” (P. 54, ll. 7-8).

The book is divided into four sections, the first titled “A Tongue of Stones”, suggesting immediately the heaviness of language as our common denominator. The word “tongue” repeats continually throughout the poems symbolizing multiple interpretations: the tool of expression and sensuality; the snake that tempts and lies; the facilitator of communication with its inherent limitations. Guenther is a great voyager, traversing the globe with a dissecting eye toward nuance as opposed to declarations of sweeping vistas, wide landscapes and pedestrian observations. She states, “Every town spat out a new face, ace/of spades, jack/of all trades, each tongue/a colour in her ear” (P. 25, ll. 12-15). Guenther’s descriptions of sexual encounters and imagery are stark and haunting: “And his tongue loaded the long pink/weapons of her sex” (“Delphine, at twenty-two”, P. 26, ll. 22-23). She searches for her “wild tongue” (“Anorexia”, P. 27, l. 10), and “bitter blue slivers/of heart tongued shut in dank cafés” (“The House on Humewood Drive”, P. 29, ll. 14-15). The descriptions are honest and fearlessly focused as in “Kurdish Stranger” conjuring an immediate picture, clear and disturbing, of a young pickpocket: “A tongue reddening his marigold teeth” (P. 45, l. 9).

The disenchantment of young, struggling female office workers is evoked sharply in “Pink Ghetto or The Caption Editors”, “…two smokers /slurp away at hangovers, the latest/lover’s spat, the Help-Wanted ads” (P. 30, ll. 9-11), and in “Whore” the desperate loneliness of a prostitute is described as “…a fleshworks, her bedroom/a number in Düsseldorf” (P. 32, ll. 1-2). She explores again capitulation to transgressions in the working world, hopeless dead ends with no avenues for escape, as in “Canadian National Exhibition: Punch-In-Time” when she states, “…your uniform/waits in yesterday’s shape,/the boss’s anger/a hand under your apron” (P. 62, ll. 4-7). She understands well the consequences of displaced emotions and deflected, hidden feelings. The sensuality of Guenther’s verse is often borne of darkness and a shifting gender landscape yet depicts the similarities of all such encounters regardless of preference. There is “Kowtowing to the charm of hands” (“The Many Charms of Caoutchouc”, P. 34, l. 14), the loss of innocence and blunt realizations as in these lines from “In Brief” when she laments, “And you were/something like a bandage/I’d peel off to see the fine white/seam of girlhood closing” (P. 38, ll. 27-30), evoking the misguided ways we soothe loss and disappointments that, ironically, provoke unavoidable inner admissions. In “Point of Departure” she describes the end of a relationship with startling economy and poignancy, affirming “Already it has us/thinking in abbreviations” (P. 52, ll. 1-2), and in “Crossways” the evocative and concise realization of disillusionment punches true with “…my eyes shed their kohl” (P. 49, l. 11), indicative of how we hide behind a mask or persona.

Guenther explores the many ways we divert ourselves from pain that never offer genuine solutions. In fact she condemns them as mere obfuscations in these lines from “Explaining Booze” where she observes a lover with “…a grin singeing/the side of your face” (P. 57 ll. 1-2) and concluding “…there should be a law/against love and booze” (P. 57, ll. 13-14). The often terse and succinct choice of words allows us to see a situation afresh without stretching lines of credulity or straining for uncomfortable and disparate comparisons. In “The December of Conception” we have “…two people who should not be silent/together” (P. 58, ll. 9-10). The split line of “silent” and “together” emphasizes an ironic dichotomy. There are wistful, melancholy ruminations in lovely lines such as, “We harvested all the blonde of summer”, (“Poem for Marie”, P. 35, ll. 2-3), unique rhyme like “…the sun a snake at your nape”, (“Canadian National Exhibition: Punch-In Time”, P. 62, ll. 1-2), and a sensuous description of peeling tangerines in “Inaba-sama” that strikes at such a strong, tactile level: “Peel back/their loose skins, slowly, like lips,/unfolding them one by one in her palm/to birth four flat worlds/blushing orange”, (P. 72, ll. 21-25).

Guenther is skillful at elucidating sudden shifts in circumstance and the dissolution of ideals as she describes “…conductors’ voices flexed/like muscles around the consonants/of villages where the young slam/drunk into trees thinking/the straight line of their lives”, (“Somewhere near the Rhine, or anywhere…”, P. 40, ll. 14-18), or in “Loitering” where we are reminded of the discordant possibilities that exist in our landscapes of expectation: “if you opened your mouth/now, everything/would fall in, or out.” (P. 65, ll. 11-13). Her unique insights are evident in lines like the opening ones in “On the Sázavou” as she notes, “Evening’s tilled by the shriek/of a train” (“P. 33, ll. 1-2) and “our hair/warm as a thought pleated/a thousand ways on/the glint of skin” (“The House on Humewood Drive”, P. 29, ll. 20-23). Those single words “tilled” and “pleated” turn the ordinary into the extraordinary.

In “Photograph of a Poet” Guenther sums up the impetus to creativity and freedom as a fierce human imperative against anxieties: “No one expected to find,/in your wing-hand, a taut soul/sprinting out against fear” (P. 56, ll. 8-10). She understands well the multiple effects and consequences that result from intentions in conflict with actions and results. Still she evokes awareness with a sort of woeful solace, a relentless willingness to confront our shortcomings and misguided assumptions.

These poems have a unique and striking way of showing us larger pictures of humanity through the specificity of individual situations that have universal application. In the last poem of the book, “The Nigawa River”, there is the poignant projection of eventual finalities from a vantage point of youth that sees a future already embedded in the present: “…and our bones locked/on all the years ahead” (P. 80, ll. 16-17).

There is a stark, necessary brutality to these poems, and so many wonderful, poignant lines that one is tempted to quote continuously in an effort to impress upon readers the importance of this work. Therefore the best recommendation is to read it whole, in its entirety, to absorb its authentic reflections and stunning phrases and to reap the rewards of personal insight and possibly even enlightenment.

About the reviewer: Karen Corinne Herceg graduated Columbia University where she studied with David Ignatow and Pulitzer Prize winner Phil Schultz. She has featured at major venues with such renowned poets as John Ashbery and William Packard. Her new book of poems, Out From Calaboose, was released in November 2016 by Nirala Publications with edits by Linda Gray Sexton, bestselling author and daughter of two-time Pulitzer Prize winning poet Anne Sexton. Her website is www.karencorinneherceg.com.