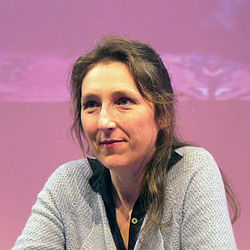 What made you decide to bring Solange back?

I reached the age, after 20 years, where I was a bit fed up with creating, inventing, or making up new characters. I’ve got some sort of reservoir of characters in a small village – a fictional village called Clèves – in my mind and in my books. Solange is a very dynamic character and she has experienced many things for me. She’s a sort of alter-ego . She’s me if I wasn’t a writer, which makes me a bit dizzy when I think about it, because I am basically a writer in my bones. She’s me without the books, and without the words also, and I like her. She’s a bit candid. She’s not stupid at all but she’s not really educated and she lives things very directly, very instinctively, and I love her as a character.

Were you curious as to how she aged?

It’s not exactly like a series. It’s not Solange 20 years after. It’s more – perhaps more poetical. She could be many things. and I decided that this time she was going to be a second-rung actress: sexually mature but sentimentally a very young girl still. Like in the book All the Way, where she appears and she gets experienced, but she’s fundamentally from a small village in France and when she meets this guy who is from a completely different background, but is also from a small village in Africa – Camaroon – they share this. They are not people from big cities and they’re fascinated by big cities and the glamour of it.

Yes, they’re outsiders and they are labeled by Hollywood. Because she’s a white French woman with high heels, she always plays the Parisian – the romantic girl or the bitch. And he’s black, and being a second-rung actor he’s always either a boxer or dealer or the cop, and they’re so fed up with labels. They try to escape the labels but they love the glamour of the big city and Hollywood, so they remain.

One thing I noticed is that the title in English is quite different from the French Il faut beaucoup aimer les hommes. It doesn’t tie back to the epigraph.

Yes, perhaps it’s a very French quotation, I don’t know. The original title means you’ve got to love men a lot, a lot, if not you just can’t stand them. It’s a funny quotation by the famous Marguerite Duras, but Men is good also, because the book deals with the relationship between men and women and the misunderstanding that passion involves. It deals with passion. Passion is not love. Love helps you to live. Love helps you to work. You’re in good company with love. Passion prevents you from living, working, breathing. Passion is a disaster. It’s an exquisite disaster. It’s so intense, it’s fabulous.

Do you think it also prevents her from loving him?

Oh yes, exactly. You’ve got the point. Absolutely. Passion makes her blind and prevents her from loving this real man. Because he loves her. Many readers, especially women, find Kouhouesso a ghost man. No, he really falls in love with her, but she makes him fall out of love with her. She waits for him. He never asks to be waited for so much. He fell in love with a powerful, intelligent bright, sexy woman. She turns herself into a sort of sleeping beauty. She refuses roles for him. She even quits her yoga lessons for him and that’s not sexy at all – we all know that.

Solange talks about wanting to disintegrate

Solange sees her father in Kouhouesso, doesn’t she?

Yes, Kouhouesso is exactly similar to her father, but black.  Which enables her to fall for him without it being incestuous, or too similar a relationship. He continually reminds her of her father, but since he’s from Africa it’s removed enough to allow her that.

As a psychoanalyst, are you tempted to analyse your characters or fix them?

If my characters went through psychoanalysis, I couldn’t write about them. They would be so much less interesting because they would know what they do, and a character who knows what he or she does is not a good character for a novel.

The characters that I like to create are really characters who move in the dark – they don’t move where they ought to, and I love them for that. Sometimes they fall in traps. All of my characters are very brave but a bit candid and a bit naïve.

It appeals to me, and they’re qualities that are very dynamic which helps the story. Well you know, basically I am like that. Intrepid. For this novel, in the middle of it, I couldn’t write anymore. I’ve been to Africa many times but I needed to go back. So I stopped. I went to the jungle. And I’m the mother of 3 children, and I was there in the jungle and I thought I must be completely crazy, but I needed it for the book, I really needed it. And then I came back and I wondered as I was writing, whether I had created a character from myself. I thought, is this me or is this not me. It’s bizarre.

Did you go to the Congo to research the book?

I have a friend who travels a lot and she said to me, Marie, don’t go to the Congo with the tourists. It’s too dangerous to travel there alone as a woman. He said, go to Cameroon, because it’s the same forest and it’s less dangerous. It was dangerous actually, but I was able to manage it.

Oh yes, always. It’s very important. Especially my first novel Pig Tales. It was translated very well in America by Linda Coverdale, because she found the right voice. If you just tell the story…stories aren’t that important – it’s the way they’re told. In Pig Tales I was already experimenting with that clean, naïve voice that enables me to tell a lot of things, even offensive, horrible things. It’s a fable, a fairy tale, but very ironic. The narrative voice is very efficient. The readers perfectly understand what’s at stake, but my character doesn’t. It wasn’t inventive or anything new. I mean Nabakov did it many times, but the tone of voice, absolutely, is very important. More than the story.

In Men, the voice is an interesting mix of this fractured interior voice and the authorial.

Yes, it’s a mix. I always deal with clichés, which means I deal with dynamite. Clichés about black people are really hard to deal with, but I wanted also to have this character, Solange, she’s not a racist at all, but she’s awkward sometimes. She’s very ignorant, but she’s also very willing to learn. That’s why she takes a plane to follow him in Cameroon to a place she’s never been before. So I like her for that. Her ignorance allows me to write things really on the edge about Africa. I mean she thinks that Africa is about elephants, but no, Africa is about so much more than elephants. She learns and I hope the reader follows me on that.

I read an interview the other day that noted that there are very few white writers writing about the experience of being white. That’s something you do in Men.

Yes, that’s right. This is the story of a woman who discovers that she’s white. She never gave a thought to that before. She thought white was natural, normal – just a given. She wants to live with Kouhouesso in a bubble – just a man and a woman. He’s much more political than her and he keeps on reminding her that their story comes with a history of violence and subordination – especially the French people. She’s very ignorant even of what French did, especially colonisation. She’s very ignorant. I love stories. I love novels, and I didn’t want to write a didactic novel. Solange would like to just be with Kouhouesso alone on the planet. But that can’t be. You’re never alone. There is always a social context.

Is there a dance of minorities between Solange and Kouhouesso?  The shifting of roles between her subjugation as a woman and his as a black man: her ignorance and his misogyny?

Yes. I always feel that different minorities have things to tell each other. It’s always interesting to have this dialogue and this play. Is Kouhouesso a misogynist? I don’t know. If he is, it’s partly Solange’s doing. She wants to live in a fairy tale. She wants to be a princess. In a way she provokes him to be a little bit of a misogynist.

Do you have something on the boil at the moment?

Yes, I always have something on my mind. I just finished a biography of a  painter, Paula Modersohn-Becker, that no one had heard about (Être ici est une splendour). I’m now working on a novel about migrants. Everyone is talking about migrants, and again I’m working on something that will have a a particularly candid voice. Solange will be back and her best friend Rose will be the protagonist in this one, but I still have a lot of work to do.