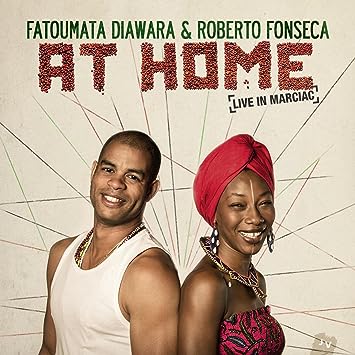 Jazz piano and African dance music can be discerned in “Sowa” a song by Malian singer and guitarist Fatoumata Diawara, performed on At Home (Live in Marciac), a collaborative album by Diawara with Cuban pianist Roberto Fonseca, featuring a 2014 concert performance in Auvergne, France.  It is a singular sound, full of energy and rhythm.  Diawara sings too in “Connection,” the song by Fonseca featuring piano and strong percussion—Ramses Rodriguez plays drums and Joel Herrezuelo percussion, a perfect balance of rhythms and tones, earthy and elegant.  Roberto Fonseca’s “Yemaya” is a loose, rollicking jam.  There is little question that the creativity the duo has begun is continuing.  In a June 1, 2015 review of a London music concert, David Honigmann of The Financial Times wrote of the performers Fatoumata Diawara and Roberto Fonsecaand of the audience’s affection for the two artists alone and together, and of the developing harmony of the concert, the variety of Diawara’s singing, and the delicacy and power of Fonseca’s keyboard playing.  The conscientious Diawara and the experimental Fonseca brought compassion, drama, friendship, and rhythm in their creation and exploration of a shared international musical palette.

On At Home (Live in Marciac), the song “Real Family,” written by Diawara and Fonseca, has a spoken introduction and a quiet piano, with a ruminative nature, followed by the rushing ramble of pointillist notes, the dance romp, of “Clandestin,” and then “Neboufo,” both written by Diawara, the latter—one hears and sees space and heat in the song—has the audience clapping as Diawara sings in a voice with significant range, high and low.  The audience is applauding the creativity that comes out of collaboration, the kind of collaboration that is sometimes thought impossible.  Many times we have been told how insurmountable are cultural barriers and national borders—but the collaboration between the Malian Diawara and the Cuban Fonseca is further proof of how malleable art, beauty, intelligence, and joy make those boundaries.  One is reminded of the literature that has tried to suggest the complexities of art and culture: books such as The Black Atlantic by Paul Gilroy; Black Cosmopolitans by Ifeoma K. Nwankwo; Cuba and Its Music by Ned Sublette; From Harlem to Paris by Michel Fabre; Music, Culture and Conflict in Mali by Andy Morgan; and The Practice of Diaspora by Brent Hayes Edwards.  Nonesuch Records brought out an album, Afrocubism (2010), featuring African and Cuban musicians, including Cuban singer and guitarist Eliades Ochoa, and Malian ngoni lute master Bassekou Kouyate, kora master Toumani Diabaté, and balafon player Lassana Diabaté.  A cross-cultural project, Mali-Cuba: Music Across Generations, focused on youth, involves travel, music workshops and performance, and film documentation (the project team are British music scholars Lucy Duran and Geoff Baker, and ethnomusicologist and film documentarian Michele Banal, Malian bala player Lassana Diabaté, and Cuban cultural programmer Caridad ‘Cary’ Ferrer Diez): the project researches, documents, and celebrates connections between Mali and Cuba.  Of course nothing could be less academic or more fun than the collaboration between the Malian Fatoumata Diawara and the Cuban Roberto Fonseca.  The explosion of sound—a renewal of the original, more tragic meeting of Africa and Cuba (when West Africans, enslaved, were taken to Cuba); a renewal of positive transformation—is full of rambunctious rhythms and the tiniest of details.  Their music is innovation beyond the abstract, dry, irritatingly high-pitched and frantic, dully willed official experiments of the self-proclaimed avant-garde.

Daniel Garrett has written about art, books, business, film, and politics, and his work has appeared in The African, American Book Review, Art & Antiques, The Audubon Activist, Cinetext, Film International, Offscreen, Rain Taxi, The Review of Contemporary Fiction, and World Literature Today, as well as The Compulsive Reader. Author contact: dgarrett31@hotmail.com or d.garrett.writer@gmail.com