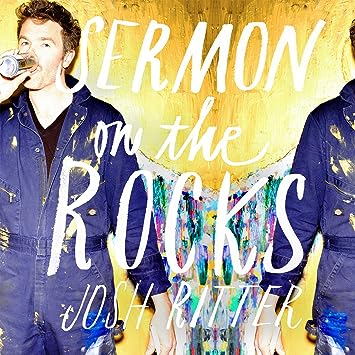 The narrator takes the stance of a prophet predicting terror and trembling—“fire is coming”—in a song that yet sounds hushed, intense, and sexy, “Birds of the Meadow,” on Josh Ritter’s album Sermon on the Rocks.  “Young Moses,” another song, is as possessed and pleasing.  “Blessed be the poor—your treasure is on high,” sings Josh Ritter in the song “Henrietta, Indiana,” about a mill town that lost jobs, a place of intoxication and bad faith, adding “Happy are the ones who get out.”  It is hard to know how to take these references to the sacred and the profane: is Ritter’s passion for such considerations merely literary or also moral?  (It is not the first time that Ritter has used such motifs, which have garnered him sometimes vexing comparisons to Bob Dylan and Leonard Cohen—as with Ritter’s political album The Animal Years.)  John Ritter has the thematic range of a contemplative and visionary artist.  There is amusing comment on small-town life, and a return of a young person from college to a small town, knowing more than was hoped for by parents and church members in Ritter’s song “Getting Ready to Get Down” on Sermon on the Rocks.  There is so much humor, intelligence, and passion in the songs that Josh Ritter’s use of sacred references seems like an opening rather than a closing of mind.  The Idaho-born Josh Ritter, a onetime high school runner, swimmer, and wrestler, a performer who exudes thought and joy, was inspired long ago by Johnny Cash and Bob Dylan, and Ritter received the early encouragement of musician Glen Hansard.  Josh Ritter, who has made well-received recordings, told Paste magazine (October 13, 2015) that he wanted his album Sermon on the Rocks (2015), produced by Ritter with Trina Shoemaker in New Orleans, to contain more energy, to be more vital: “exuberant” was the word Ritter used, and he wrote about thirty songs from which to choose.  John Ritter’s writing and song selection are gratifying.

Josh Ritter’s discography includes a self-titled album from 1999; and The Golden Age of Radio (2000/2002), Hello Starling (2003), The Animal Years(2006), The Historical Conquests of Josh Ritter (2007), So Runs the World Away (2010), and The Beasts in Its Tracks (2013)—and now Sermon on the Rocks.  Music critic Jonathan Bernstein of Rolling Stone (October 29, 2015) commented that “On ‘Getting Ready to Get Down,’ the album’s too-goofy-to-be-true lead single, Ritter is just about rapping his playful verses over a New Wave guitar line as he tells the story of an adventurous young woman struggling to fit in with her pious hometown.  But he pulls it off, turning the song into a raucous celebration of self-reliance.”

Josh Ritter’s Sermon on the Rocks, an album on which Ritter performs with drummer Matt Barrick, bassist Zachariah Hickman, pianist Sam Kassirer, and guitarist Josh Kaufman, comes to us through Thirty Tigers, an independent music distribution company that helps artists while allowing them to maintain ownership of their music.  The Historical Conquests of Josh Ritter, a much heralded album, had been produced with a large corporation, Sony.  (“The Historical Conquests of Josh Ritter captures an artist making a deliberate stab at real growth, and largely succeeding,” wrote the online culture site PopMatters reviewer Michael Metivier, August 29, 2007; and “On it, he seems eager to reinvent himself as a heartland rocker testing boundaries of tone, texture and expression,” wrote Richard Harrington of John Ritter and Historical Conquests in the Washington Post, October 5, 2007.)  Josh Ritter seems to be a shrewd businessmen, allowing music companies to produce and distribute his music but within contracts that eventually return the rights to him: “You can’t expect people to work against their self-interest, so I always make sure that the records will always return to me after a given amount of time.  That’s always in the contract to begin with,” Ritter told the online Paste magazine’s Kyle Meredith (June 17, 2014).  Ritter is an artist and a businessman.  It was The Historical Conquests of Josh Ritter, a recording made in an eighteenth-century farmhouse in Maine, a work of great confidence, an album full of characters and stories and insights, which defied detractors, fulfilled many hopes, and raised further expectations for the musician.  “I’m gonna take up the Steinway, / waiting for the bullet that I’ll never see come. / I’m gonna start me a new wave. / I’m putting up with you lightweights, / calling me out to the middle of the street. / Ooh, I’ve got you in my mind’s eye,” sang Josh Ritter in one of Historical Conquest’s songs, “Mind’s Eye.”

Josh Ritter has been known as one of the more thoughtful of musicians—ambitious, in a field in which the image of the casual, sensual performer is preferred.  Yet it was strange when the online music site Pitchfork seemed to fault Josh Ritter for craft: “There’s a lot of smarts in his music, but little sense of spontaneity or discovery,” wrote Stephen Deusner, reviewing The Historical Conquests of Josh Ritter, wanting something more personal and wilder, even after noting, “He places every word, renders every image, unspools every theme, and lays out every melody with superlatively efficient precision that the resulting songs—including those on The Historical Conquests of Josh Ritter, his fifth studio album in eight years—possess no defining blemishes or faults, no open wounds or emotional heft” (Pitchfork, September 27, 2007).

Of So Runs the World Away, Josh Ritter’s sixth studio release, the American Songwriter contributor Grant Lawrence wrote, “It is a monumental album in everything from the scope of its subject matter to its grand instrumentation and production.  While not a concept album, it is very centralized in its theme of exploration: exploration of both geographical landscapes and weighty concepts” (May 4, 2010).

“Ritter, who has never had much more to sell than a bright smile and a bunch of great songs, has always let his clever wordplay and literary sensibilities render and define his big-hearted romanticism,” wrote Jonathan Bernstein of American Songwriter (April 3, 2013), when reviewing The Beasts in Its Tracks, finding that the singer-songwriter’s acceptance of the personal perspective—an acceptance that was long fought, as Ritter had preferred as an artist to get beyond his own existence, to engage and express a larger vision; an acceptance of the intimate and small yet searing, an excavation of self, that came after heartbreak—and was a source of creative renewal.

On Sermon on the Rocks, a remarkably fun and satisfying album, Josh Ritter creates an airy atmosphere—beautifully mysterious and sensuous—for “Seeing Me Round.”  The sound throughout the album is clear, vibrant, particularly in “Seeing Me Round” and “Where the Night Goes,” about the possibility of romance, in which voice and instrumentation are precisely delineated and warm.  “Cumberland” quotes a spiritual, with something of a country twang—it is an appreciation for rural life, with the line, “You gotta get yourself back to the country now.”  And “Homecoming” refers to a place where the tree of the knowledge of good and evil still stands; and in it a girl asks a man to show his bad side, his true self.  “I first tasted the universe on a night like this,” sings Ritter—definitely one of those lines that will have its detractors, though some people will know very well the genuine experience that is his subject.

“The Stone” is slowly paced, with a heavy beat and metaphorical lyrics about freeing oneself from a stone that will yet continue to be a reference point.  “I thought I was the one for you but the truth is sometimes I don’t know,” Ritter sings in “A Big Enough Sky,” a song about faith and doubt with a busily jangly arrangement.  In “Lighthouse Fire,” Josh Ritter, again mentioning the tree of good and evil, sings against his own voice in a density of rhythm.  “I never doubted you.  My man on a horse is here,” Ritter sings in the collection’s last composition, “My Man on a Horse (Is Here),” the deliverer appearing as a cowboy—and, what could be more American?