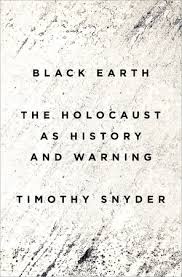 Auschwitz has become byword and paradigm for the Holocaust.Yet, as Timothy Snyder writes in this salutary book, Auschwitz was atypical: a concentration camp, built in 1940 to house Polish prisoners of war, it acquired a death facility only in 1943. Most Jews who perished in the Holocaust had been murdered by that time. All of which is not to say that Auschwitz was not an effective killing factory; in the space of two years it managed to murder nearly a million Jews more.

The book begins with a peek into Hitler’s worldview. We are told that there are distinct human races and that some (like your German) are superior to others. These races compete, or should be made to compete, for land and other precious resources (here one recalls the Nazi penchant for gold). Any disagreement with this neo-Darwinian view is due to the contamination of Jewish ideas, including Christianity. It follows that Hitler will seek a war against another (lower) race, say the Slavs, and aim for the control and containment, later perhaps even the elimination, of the Jews. And so it transpired.

Snyder’s presentation in these first chapters shows the value of paying close attention to what Hitler actually wrote and said. We are sometimes inclined to dismiss Hitler as mad or just plain bad, but his worldview was coherent after a fashion. And if he was insane, it is an insanity that others were willing to share. He had no difficulty in finding believers and accomplices.

Next, we follow Hitler as he gains power in 1933 and consolidates his position. He builds military capability slowly, showing considerable patience, acting against Austria and Czechoslovakia only in 1938. He establishes the Molotov-Ribbentrop pact before invading Poland in 1939, thus neutralising Stalin. This gives him a free hand to deal with France and Great Britain. In 1941, with France crushed and Britain under the cosh, he then turns on Stalin, invading the Soviet Union. Here was the war he wanted all along.

Snyder suggests that when the German campaign against the Soviet Union faltered, violence toward Jews intensified. Of the decision to kill Jewish women and children as well as men, for example, Snyder writes that ‘this innovation took place under the pressure of failure on the battlefield’. In another recent (2015) book, Holocaust versus Wehrmacht, Yaron Pasher argues for something like the contrary situation, that the fevered pursuit of the Final Solution undermined the war effort and so led to defeat. At any rate, it was in Eastern Europe, in the stateless lands that had been occupied by Soviet and German forces in turn, that the Holocaust began in earnest.

At the centre of the carnage stood the so called Einsatzgruppen, task forces led by the SS, which followed fast on the heels of German troops. However, here Snyder is determined to debunk some misconceptions:

Sometimes the Einsatzgruppen who followed the Wehrmacht into the Soviet Union are presented as unstoppable agents of evil with an unambiguous program of total killing… [Yet] although the Einsatzgruppen were the first to shoot Jews in large numbers, they were a small minority of the German perpetrators. The myth of their total responsibility arose during postwar trials in the Federal Republic of Germany as a way to protect the majority of German killers and isolate the killing from German society as such.

At this point, the killing of Jews took the form of mass shootings over pits dug in forests and woodland, although the Nazis modified and elaborated on even this simple method over time. They were, in Snyder’s chilling phrase, ‘entrepreneurs of violence’. Once America entered the war, making it a global conflict, the decision was made to kill all Jews under German control. The Wannsee conference took place a month later, in January 1942, and approved the gas chamber as the most efficient technique of mass killing. That led to the building of death camps and the addition of death facilities to existing concentration camps. Auschwitz.

It is a dark, harrowing history but there are a few rays of light in the final chapters, in particular in the last, ‘The Righteous Few’. Hitler may have been Austrian, but so too was Anton Schmid.

Snyder’s concluding chapter turns toward our own world. We are often told that ‘we should never forget’ and ‘it must never happen again’ but if we lack a clear understanding of how the Holocaust arose then it, or something like it, will inevitably recur. He identifies a fair few faultlines: the pernicious conflation of science and politics; regime change and civil wars leading to statelessness, which is when minorities are most at risk; ecological panic and the fallout from climate change. The latter point is worth expanding upon. Hitler lived in a world of scarcity, before the so called Green Revolution, and our world may in time become something like that. Consider for a moment the migrant crisis in Europe. You have people fleeing from Syria, a land made inhabitable due to civil war, terrorism and bombs. In principle, such a war is avoidable – though human beings haven’t had much luck in desisting from war so far. But what happens when a land becomes uninhabitable as a result of drought, rising sea levels and the like? Millions of people and nowhere to put them.

To my mind, this is a clear, convincing and rounded account of the Holocaust, the best we have had to date. Snyder makes telling use of Russian, Polish, and Ukrainian sources and he also pays meticulous attention to what the Nazis themselves wrote and said. The result is a context and a narrative in which – and, yes, it sounds almost immoral to say this – the Holocaust makes a kind of sense. This is how it could have happened. The logic is there, if you accept the skewed premises. The darkness of those days, always visible, is now intelligible.

Black Earth is a necessary book.

About the reviewer: P.P.O. Kane lives and works in Manchester, England. He welcomes responses to his reviews and you can reach him at ludic@europe.com. Find more of his reviews at Jildy Sauce.