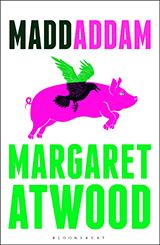 Maddaddam is the third and final book in Margaret Atwood’s phenomenal Maddaddam Trilogy that also includes Oryx and Crake and The Year of the Flood. Although each book stands alone reasonably well, this third one definitely requires the detailed overview of the other two in order to place it in the right context. As with the other two books in the trilogy, Maddaddam is full of inventive and blackly humorous details about the world of the future – a miserable place where most of the humans have been wiped out by Crake’s deadly pandemic. A few people have survived, along with the beautiful Crakers – a man-made species designed and created by Crake to replace the humans he’s wiped out. In death, Crake and Oryx have become the Craker’s deities.

Atwood’s scientific capability is on full display in this book as we come across a range of transgenic and spliced animals like the Wolvogs, the grolars and pizzlies, and my favourite: the intelligent pigoons, who feature strongly in this book. The contrasts that Atwood draws between God’s Gardners, a now defunct religious/Quaker style organisation led by Adam One, missing in action from the start of Maddaddam, and the ‘science gone mad’ political hijinks of the CorpSeCorps – a government run technological function that seems to run the world – drives much of the action in The Year of the Flood, but it’s strong characterisation that drives Maddaddam. The story is, at heart, a tale of love between two survivors – Toby and Zeb. Toby and Zeb both featured in Year of the Flood, but in this story, Toby is the main protagonist and we come to know both her and Zeb, who reveals his own backstory and relationship to Adam One as well as the story of the origin of God’s Gardeners.

Toby grows into a full-fledged heroine as she finds a way to live in this dystopia, making some meaning for the Crakers – particularly a young boy named Blackbeard, for whom Toby becomes a teacher. Blackbeard’s interpretation of the world is naïve and often beautiful, but also poignant as he ‘comes of age’ against the humans’ demise. Much of the story is told in mock-myth form as Toby provides prettied-up ‘bed-time’ origin stories to the Crakers, who gather round her to get their daily dose of wisdom, supposedly sent down from Crake himself. The world of Maddaddam is harsh and often ugly world – particularly the Painballers – a group of criminals who have survived their Hunger Games style imprisonment a number of times and have lost their ‘humanity’ in the process. However, in spite of some pretty gruesome episodes, ultimately the story is a redemptive and satisfying one. The Craker’s naivety is charming, and beyond Toby and Zeb, the characters are delightfully Dickenesque – turning to fizz, flirting in scientific jargon, and cooking up a storm with weeds and lab-grown splices. The dystopic nature of this book hasn’t diminished the natural world. If anything, the gardens are even more lush, especially under the influence of Toby’s meditation herbs:

“It’s the gloaming: deeper, thicker, more layered than usual, the moths more luminous, the scents of the evening flowers more intoxicating: the short-term Enhanced Meditation formula has that effect. Zeb’s hand in hers is rough velvet: like a cat’s tongue, warm and soft, delicate and raspy.”

While the futuristic world that Atwood creates in all of the books in this series is pretty wild, it never strains credulity and, as Atwood says in the Acknowledgements, all the technologies and even the bio-beings are possible in theory and in most cases, already in existence in various feasibility studies. It’s easy to imagine this world in the future, as well as the power-made Crake and the beautiful Oryx, who we also get to know better in this book, even though both are already dead before the book opens. Although this is a story that is all too likely to happen, and therefore a bit scary, ultimately the Maddaddam Trilogy is, as Blackbeard puts it, a “thing of hope”, beautifully written and utterly engrossing.

← A review of Secret Storms by Julie Mannix von Zerneck and Kathy Hatfield
A review of Greenwood Tree by B. Lloyd →