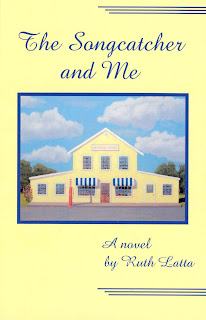 The Songcatcher and Me is a most delightful read. While written for teens and young adults, it captivated me and took me back to my youth – those years of so many conflicting emotions: boredom, feeling like one just doesn’t fit into society, not sure of what one wants.

Her uncle is a frustrated, unhappy man. It is obvious he put his dreams on the back burner to help his mother carry on the business. She has a weak heart, and so Sheila is a godsend. Uncle Cam toils away at the mechanics side of the business and his only joy is restoring an old car.

The term “songcatcher” is a beautiful word to describe the passion for archiving the old folk tunes that accompanied people as they came to settle in North America. The fascinating subtle differences of the different regions come to life. When Alice Common, the songcatcher, arrives at the country store, she captures the imagination of Sheila, who is so happy when Alice wants to hire her. Uncle Cam sets up resistance. He is not a mean man but feels it is silly to set up dreams that one cannot achieve. However, Sheila is hired to help Alice.

Ruth Latta captures the excitement that Alice instils in Sheila. Alice is an example of a completely different lifestyle than Sheila knows. Alice is childless by choice and her husband is very much an equal partner – a rarity in the 1950s and 1960s. Without realizing the impact she is making, the songcatcher has an influence on the outcome of the story. The grandmother is one of the singers that Alice records and even goes to a festival to sing, a dream she would never have thought possible. She encourages Sheila and also her son to follow their dreams. Uncle Cam finished fixing up the old car, sells it, and gets a job in the big city that he loves. The grandmother sells the store, goes to live in town, and Sheila is given inspiration to follow her dream.

I found myself examining my life at the present time as to what dreams I had when I, too, was fourteen years old. I was more than pleasantly surprised to realize that I did fulfil most of them even though it was, at times, a real fight to do so, and the path was never straight and it was certainly bumpy, but I did. The Songcatcher and Me is a gentle story of following one’s dreams.

About the reviewer: Lorna Foreman is a columnist for Ottawa’s Fifty-five Plus magazine, and the author of two books, Wheat Watchers: a Recipe Book for Gluten Intolerant Appetites, and When Life Becomes Real.

← A Review of Lifesaving Lessons: Notes From An Accidental Mother By Linda Greenlaw
A Conversation with Deborah Harkness →