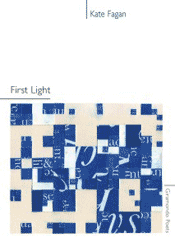 First Light begins by confounding the reader. Clashing words, unusual images, subversions, language works as both subject and referent, playing off the emotions and experiences of the narration. It takes a little while to adjust to these pieces which play as much with space and shape as they do with sound and form. The book is divided into five sections, each structurally and thematically distinct, though related perhaps by a recurring thread around the nature of perception and the role of the writer to expand that through words.

The first section, “Observations on Time, Cargo” opens the book with a series of nine short interlinked pieces. The narrator awakens from a dream as the language contrasts the blurred memories of night with the discovered images of day. The images are sharp and fresh, mingling concrete observations with an abstract physics:

the time it takes to swerve,

This second or another –

Everything changes – the world made new through language and attention.

The next section “First Light” is a series of ten Centos, each written for a named person or event. A Cento is an original poem composed of a patchwork of other poet’s lines. It’s a tricky form to master, as you aren’t allowed to modify the lines or write your own lines and yet you have to create something both novel and coherent. Fagan handles the form perfectly, pulling the disparate lines together into new meaning that resonates with the overall theme of the section. The title poem, “First Light”, is particularly powerful, working the light motif, while, at the same time, referring to the Cento form itself, illuminating its value:

a kind of punctuation — : sapphire light,

as if this being’s old light carries

the whole world of present activities. (15)

“The Correspondence” section presents the strongest poetry in the book, created as part of an international collaboration with Luke Plumb and a number of other artists. These “letters” are intensely visual, working through natural imagery and allusion infused with emotion and desire. The end result is an almost intuitive truth – poetic letters that feel both universal and intimate, as if the reader were the sole recipient. As a fan of Plumb’s wonderful Celtic inspired music, I can only image that the upcoming album will be astonishing, however, these pieces most definitely stand on their own:

“Book of Hours for Narrative Lovers” is the most challenging section. As with “Observations on Time, Cargo”, the pieces are serialised, taking up only a small proportion of each page. They are linked to one another thematically, but also stand alone, each work signalling a new start with the large formal typeface of the first letter. The white space provides enough of a pause to separate each piece. While there’s a prosaic feel to this work which is grouped into paragraphs rather than stanzas, the sentences are mostly left unfinished, working, like the breaks at the end of each page, to force the reader to participate in the creative process, filling in the gaps or adding in the connections. The grammatical syntax is also inflected, though not enough to lose the coherency. Instead, the conjunction of familiarity and distortion provides a cognitive dissonance that, mingled with the lovely imagery, is simultaneously pleasing and intellectually tricky. As the pieces are written in first person, there’s a confessional aspect to them that invites collusion. There is also an innate musicality to the work as it rings and jingles through a range of poetic tools, including repetition, as the poems refer back to one another. Each piece therefore becomes a kind of mini-performance, changing and taking original shape with each reading:

We are on eternity’s cold side. A woman with red sleeves a man with a horse. Heads rush into light. I bend to drafts and read each tablet like a memory. Acoustic revelation. (41)

“Authentic Nature” comes back to a more familiar poetic – a series of discrete, relatively concrete poems that are instantly accessible. As the title suggests, these poems have a lyrical, pastoral quality, taking their cue from a natural, very Australian inspired world. Jacaranda, magpie, swamp hen, a honeyeater, and eucalyptus stumps move across paddocks, the Hawksbury river, familiar backyard gardens, and Sydney suburbs. The play of words here is more relaxed, but no less driven by the desire to create something entirely inventive. The title poem “Authentic Nature” sums up the overall theme of the entire book:

for a different language,

a new balm for the bruise

The final section is a reprinting of the previously published chapbook “Thought’s Kilometre”. Again the pieces are connected, but these are more traditional stanzas than paragraphs, separated by half a page between each. The effect is to give the reader space to pause, as each stanza becomes a self-contained piece while still referring to the other stanzas. The work is lyrical and rich, asking questions of the reader and inviting a response: “What does it mean to ask if light is receding”. Always there is the sense of pushing out the boundaries and saying what is hard, and at the edges of our usual language. The work is revealed through, as Fagan puts it, “partial knowing”, let slip slowly out of a shared dream where the poet and reader walk together through the subconscious of sensation and experience.

First Light is not a book that can be skimmed through, or read lightly. It takes time for each poem to unfold, and more time for the work to connect into greater meaning, but it’s worth spending that time in reading and re-reading. What Fagan has done in this collection is to use a tremendous amount of word play, clashing syntax, imagery and perceptions. This is made all the more powerful for the book’s rhythmic quietness. However powerful the experimental linguistics are in this work, Fagan’s writing is never brash or ugly. It’s always illuminated from within, softly musical, with meaning created in the shared apprehension that happens in the space between poet and reader. First Light is a beautiful and intelligent collection that will move, challenge, and excite the attentive reader.

About the reviewer: Magdalena Ball is the author of the novels Black Cow and Sleep Before Evening, the poetry books Repulsion Thrust and Quark Soup, a nonfiction book The Art of Assessment, and, in collaboration with Carolyn Howard-Johnson, Deeper Into the Pond, Blooming Red, Cherished Pulse, She Wore Emerald Then, and Imagining the Future. She also runs a radio show, The Compulsive Reader Talks. Find out more about Magdalena at www.magdalenaball.com.