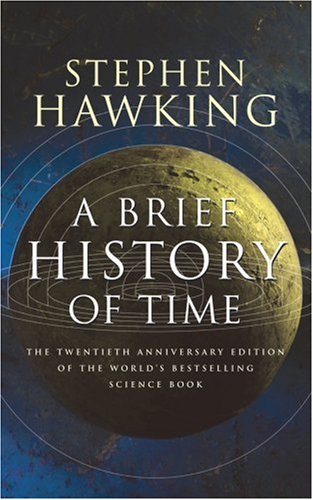 Though it remains the world’s bestselling science book, A Brief History of Time has become notorious as one of the most commonly purchased but unread books. Reading it, it’s hard to see why. Hawking’s prose is as smooth and accessible as Bill Bryson’s, and the ground he covers is still groundbreakingly relevant and fascinating, twenty years on. It’s hard to believe that Hawking is not only able to elucidate some of the more complexing scientific puzzles in a way that is clear, engaging, and exciting, but that he discovered and presented these notions for the first time. Perhaps when Hawking first wrote this book, the average layman understood little of some of the more advanced hypotheses and breakthroughs of physics, but it’s partly testament to the power of this, and other similarly stunning books, that these scientific ideas have become part of how we perceive our world and ourselves. No other scientist since Einstein, who, along with Newton and Galileo, is given a chapter, has had such a massive impact on the “common person” as Stephen Hawking. This book’s penetration into the mind of the reading public, whether they’ve actually read through from start to finish or not, has been the key reason for that impact.

I’m almost ashamed to admit that this is the first time that I’ve read A Brief History of Time. Like Hamlet or The Odyssey it has become so iconic, that I feel as if I had already read it before I came to the actual text. I knew that it was important, and I knew, to an extent, that it would be accessible, but what I didn’t know was that it would be as funny and engaging as any book I’ve read. Hawking is charming and self-deprecating, and his prose is both clear and intimate. This latest edition is a neat, smallish size hardcover version of the 1996 version and contains a number of black and white diagrams, images, and figures. There are also chapters on wormholes and time travel, and discussion around a unified theory of physics, which didn’t appear in the original version. From the original book are chapters on such things as the nature of space and time, the expanding universe, Heisenberg’s Uncertainty Principle and its implications on how we view the world, quarks and other elementary particles, black holes (and how they also emit energy), the beginning and potential end of the universe, time and how it works (and doesn’t).

In its way, A Brief History of Time is comprehensive and detailed enough to be considered a kind of bible, but at the same time, Hawking plants so many seeds that he opens the door on a welter of new notions. At no point is he ever condescending, nor does he descend into overly technical, acronym rich (linguistically poor) language. There are almost no formulas in this book. His reverence towards the great scientists who preceded him, and who support and work with, and sometimes against him is always obvious. Nor does he attempt to “dumb down” what he’s presenting. Some of the concepts are unbelievably complex. Superstring and membrane theory, with their corresponding multiverses are pretty hard to take on board, but they are presented thoughtfully, carefully, and in a way which is extremely interesting. The notion of a boundless, singularity free universe is also quite difficult to visualise. Much of what Hawking writes about in this book is still in the news, from particle accelerators to the black holes at the centre of the universe, and he addresses his concepts in a timeless way that transcends the limitations of our knowledge, moving between a poetic levity and a childlike excitement:

We already know the laws that underlie all of chemistry and biology. Yet we have certainly not reduced these subjects to the status of solved problems: we have, as yet, had little success in predicting human behaviour from mathematical equations! So even if we do find a complete set of basic laws, there will still be in the years ahead the intellectually challenging task of developing better approximation methods, so that we can make useful predictions of the probability outcomes in complicated and realistic situations. (204)

A Brief History of Time is far more than a science book. It’s one of the renaissance books that is so seminal to the notion of who we are, and where we might be in the next fifty years, that it should be required reading for every person from high school on. If that seems like a big ask you’ve got the wrong idea about this book. It’s light and easy and fun, full of subtle humour and provocative notions.

← An interview with Jennie Nash
A review of Stricken: The 5,000 Stages of Grief by Spike Gillespie & Katherine Tanney (Eds) →