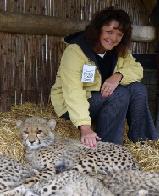 My interview with Gwen C. Watkins took place in October 2008, just prior to the UK publication of her debut novel, Nectar of the Gods.

Paul Kane: Nectar of the Gods is your first published novel; is it also the first novel you wrote?

PK: Sarah Bennett is an unusual protagonist for a mystery: a businesswoman, rather than a cop or a PI. Why did you choose “the road less travelled”, as it were?

GCW: I have always enjoyed mysteries with unusual protagonists – some of Dick Francis’s books come to mind, as well as Tami Hoag’s. And I wanted to use a main character whose perspective I was totally familiar with – that of a wine importer – which I was for twenty-some years. I was fascinated by the thought of exploring how a random bump on the edge of a credenza could turn the life of a ‘regular’ person upside down and how that person would contend with a murderer coming after them, which for a cop or a PI would be all too familiar. In this way, I have a character whose reaction to being in

extreme peril becomes much more unpredictable. I hope it inspires readers to question how they handle their fears, as well as questioning Sarah’s responses. Is Sarah out of her mind to continue to pursue her contract with the winery under the circumstances? Or is she courageous? What do you think?

PK: Did you base Sarah Bennett on any one person?

GCW: There aren’t too many women who own wine importing businesses at this point in time. Since I was the co-owner of a company, Astra Wine Imports, which pioneered the introduction of Australian wines into the US market, I used many of my own experiences in the story. However, I took character traits from a number of women business owners I know to fill out Sarah’s character.

PK: It seems, from Nectar of the Gods, that the wine industry is chockful of intrigue! How did you survive and prosper in it for 20-odd years?

GCW: I look back at it, and have to ask myself the same question! The industry is full of intrigue and characters abound. That’s why I felt compelled to write a series of mysteries with the wine business as a background! Nectar of the Gods is only the beginning, and in some respects, I toned down some of the scenes, which were based on real circumstances, because I thought they were too far out there, even for a psychological thriller! But to answer your question, I’m not sure how we managed. Almost everyone we knew said there was no way we would be successful in the face of such overwhelming odds against a small company making a mark in the US market. I think the fact that we had never been in the wine business before we started our company worked in our favor. We always tried to stay focused on our business plan, no matter what others around us were doing, and we were always there for our customers. Many of the people we worked with became good friends and I believe we garnered a reputation for being reputable business people.

PK: And a further point that suddenly occurs to me: Do you think a small or medium-sized business, in whatever industry, can ever negotiate on equal terms with a big corporation?

PK: Does the real-life Bernie McDermott share the dietary habits (e.g. bacon with peanut butter…) of his fictional counterpart?

GCW: Absolutely. And in real life, he actually gets to eat those concoctions as well, unlike the book, where all of his meals are interrupted by a crisis of some sort. He especially likes Oreo cookies and milk.

PK: Did you have the plot of Nectar of the Gods worked out beforehand, or were you surprised by what later happened to your characters?

GCW: I worked from an outline developed prior to beginning the book, however, that said, while the story stayed on track, the characters didn’t! Once the characters were fleshed out, I found many of them acting in ways I could never have anticipated. I’d wake up at night after writing a chapter and think, no way would that guy do that, or say this. And I’d get up the next morning and change it.

GCW: I never set out to be a writer, so I suppose you could say it chose me, although looking back, I have been writing since high school, reporting, copywriting, etc. At one stage, I paid a small fortune to a famous international company to spiff up our marketing materials, then ended up rewriting all of it myself. That’s when I started to think about writing professionally.

PK: How many drafts of Nectar of the Gods did you write? How long did it take to complete?

GWC: Two drafts, then one more after it was professionally edited. I didn’t write full time, since I was still the co-owner of Astra. All in all, it took around three years, working nights and weekends.

PK: Has the publication of Nectar of the Gods altered how you see yourself as a writer? (And do you fear the jealousy that fame will inevitably inspire?)

GCW: I think I’ve always had what various people might consider as glamorous jobs – when in fact they were all rather hard work! I was a flight attendant, then a emergency procedures instructor for a number of years, then I started a wine importing company and then I became a writer. Getting published was a bonus which allows me to continue doing what I love. As for fame, who knows??? I’ll take whatever comes and make the best of it.

PK: How does the book trade compare to the wine trade?

GCW: They are more similar than not, so I feel comfortable with the process. And to me, books are like wine; if they are well-crafted, everything after that is totally subjective, in terms of whether you like them or not.

PK: Who do you write for?

GCW: I try to imagine someone sitting on an airplane, on a thirty hour journey to Australia or South Africa. I want that reader to be so engrossed in the book that they lose all track of time! Or someone who’s had a hard day at work and needs a total escape. I also wanted to give people an idea of what it’s like to be in the wine business.

PK: Do you now write full-time?

PK: How easy or difficult is it to write full time for a living? Was it a smooth transition from the world of business?

GCW: For someone who is as social as I am, sitting at a computer for long periods of time is not that easy. I spent most of my working like in the marketplace, talking to people! As you know, I recently returned from South Africa, and I was so engaged in meeting people and learning about their lives, I felt totally invigorated. But there is also an escapist element to writing, which I enjoy. I can retreat at will into a world of my own making.

PK: What would be a typical working day for you?

GCW: After going to exercise class, I put in four to five hours a day. I don’t have a set number of words or pages.

PK: Which writers do you especially admire?

GCW: I have a notebook three inches thick with a list of writers I enjoy. I resorted to keeping a notebook, because even when I’m writing, I like to read mysteries, and I might go through two or three a week.

PK: What is the best advice you’ve received with regard to your writing?

GCW: Strangely enough, I haven’t actually received that much advice. I’d encourage others to get a well connected agent with a proven track record.

PK: Do you show any of your work-in-progress to anyone?

GCW: Yes. I show my husband (a fellow mystery addict) first, then I send it to Bernie McDermott and Larry Passow, then to my agent. After that, I send it to a few friends who I trust to give me constructive, honest opinions.

GCW: The Silver Dog, a continuation of the series, which revolves around the London Wine Fair. My third book will be set in the South African wine industry and the Cape Wine Fair.

About the interviewer: Paul Kane lives and works in Manchester, England. He welcomes responses to his reviews and you can reach him at ludic@europe.com

← A review of Ivan: from Adriatic to Pacific by Coral Petkovich
A review of Standing at the Water’s Edge by Anne Paris →