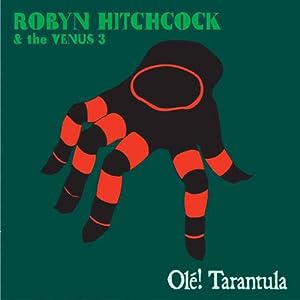 With clean production, clear and strong guitar lines, and a somewhat Beatlesque voice, Robyn Hitchcock makes reference to a rocket ship, the grave, and a hermaphrodite, and sings of “the lover and the slave” and encouraging someone to “unzipper me with love” in the song “Adventure Rocket Ship.” The boyish though gray-haired Hitchcock is joined by Peter Buck (guitar), Scott McCaughey (bass, piano, voice), and Bill Rieflin (drums, percussion), among other musicians; and in “Underground Sun,” the guitars and drums are very prominent, with the human voice down in the mix and Hitchcock sounding like a robotic angel or an angelic robot. There’s even a jangly blues-toned guitar riff in “Museum of Sex,” in which Hitchcock sings, “On this roof, I stand erect, like an egg for you to swallow” and “in the end, I’ll be a warning. Time is not for us to follow” and “music is the antidote to the world of pain and sorrow.”

Robyn Hitchcock has been plying the musician’s trade for years. His recordings include: Black Snake Diamond Role (1981), I Often Dream of Trains (1984), Invisible Hitchcock (1986), Eye (1990), Moss Elixir (1996), A Star for Bram (2000), and Luxor (2003); and there’s even a “greatest hits” collection from 1996. I had bought a bunch of Robyn Hitchcock’s tapes at discount prices years ago, but, with one thing and another, never got the chance to listen to them and did not keep them: and now, it’s interesting to finally catch up with someone who was a cult figure for others. What becomes a cult figure most? Mystery, I suppose; and if one begins to explore that mystery and finds genuine and unique talent, that is even better. In “Belltown Ramble,” on Olé! Tarantula (pronounce Olé as O-lay), Hitchcock sings a fantastical song about someone whose “head is full of paradise.” Eccentricity is one of those facts, one of those strategies, that one appreciates most if there is some sense of reality as contrast: all eccentricity, all fantasy, can render a subject, or a man, merely irrelevant. On some songs, such as the title song “Olé! Tarantula,” Robyn Hitchcock might be offering clues as to how he himself might be seen: he sings, “I feel like a three-legged chinchilla” and “looking at his fingers caressing the keys, if he don’t please you, then you just can’t be pleased.” The song “Olé! Tarantula” has harmonica music and sounds like a strange folk song, with a few spiritual bromides: “All life is sinful the Catholics say, use it up quickly, then throw it away.” Hitchcock’s lines gesture toward invention, and gesture toward meaning: do they actually mean?

About the same time I was listening to Robyn Hitchcock’s Olé! Tarantula, I saw in Manhattan’s Museum of Modern Art the Norwegian film An-Magritt (1969), directed by Arne Skouen and starring Liv Ullmann, a film about a girl who was born of rape, a disgrace in her small mountain town, and she longs for full acceptance by her church and community. The film has such an elemental force, I felt as if I were seeing the beginnings of modern western art and society: set centuries ago, in the middle ages, the story has a mythic element, with references to the Bible, with the characters’ struggle over values and the meaning of human experience. In this film of beautiful images (of nature, of Ullmann), the young woman does things to prove herself to her community, proving her character, her intelligence, her morality, her spirit. I do not think it would be easy for anyone to make that kind of film today; and yet, if that is true, something has been lost. It is a great thing to believe that we can know, that we can say, what is meaningful—and that we can pursue meaning, and achieve it.

Sung in a lightly mocking, though thoughtful, tone, Hitchcock sings “(A Man’s Gotta Know His Limitations) Briggs”: look at that title, and see what I suggest about Robyn Hitchcock’s possible transparency. In “Red Locust Frenzy,” a song that actually reminds a listener of reality, in lines that articulate that what we are is all that is, I find some small place to stand within Hitchcock’s work—and yet I wonder: isn’t imagination the thing that keeps us from feeling imprisoned by fact, by self, by thought, by the world?

The old black-and-white film The Rules of the Game (1939), by Jean Renoir, presents an aviator and the married woman he is in love with, her husband and his mistress, and a large shooting party at a chateau, and the film shows the comedy and tragedy of individuals as their ambitions and loves collide, and the more recent Babel (2006), written by Guillermo Arriaga and directed by Alejandro Gonzalez Inarritu, by presenting a narrative of several stories in different countries, including that of American tourists, and Moroccans, Mexicans, and the Japanese, is a film that does something similar—demonstrating how, despite our different perspectives and languages, we affect one another. Imagination—with reason, with sympathy—of other people’s perspectives and lives may be the only way out of isolation and

misinterpretation: if they are, we are not the first generation to think it and probably will not be the last. Human nature, forever evolving, but never evolving enough, may be irreconcilable.

The sense of language is playful, and the musicianship stellar, in “Cause It’s Love (Saint Parallelogram).” Hitchcock sings, “Everybody watches everyone” in “The Authority Box,” and that, now, might be as much reality as an American citizen wants (in our time of paranoia and war). Hitchcock’s voice here reminds me of John Lennon—egocentric, forceful, musical, infused with art, infused with life. “I’m stepping out of my disease,” Hitchcock sings. “Nothing wrong with failure—everybody does it,” he adds, a line that might be too much reality.

“There’s always someone to be loved—or to be forgotten,” declares Robyn Hitchcock in the song “N.Y. Doll.” Other remarkable lines follow: “There’s always someone fresh or cold and rotten,” and “I was a New York Doll—I was really something” and “I was the pulse of it all” and “Sincerely, I remain Arthur Kane.” (Guitarist Arthur Kane was a member with David Johansen and others in the rock band the New York Dolls, formed in 1972, and reformed in 2004; and Kane died in 2004 of leukemia. The New York Dolls were a cult band with interesting admirers, such as Rod Stewart and Morrissey.) I like Robyn Hitchcock’s Olé! Tarantula, but would not be surprised if Robyn Hitchcock remained a cult figure, possibly influential but only known well by a few.