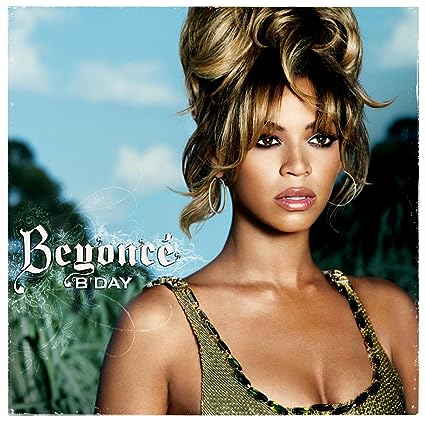 Beyonce Knowles’s B’Day, a recording released to correspond with Beyonce’s birthday, is full of attitude and energy as it mines (and explodes) male-female relationships while asserting the importance of money and luxury items and sex. The songs include: “Déjà vu,” “Get Me Bodied,” “Suga Mama” (Sugar Mama), “Upgrade U” (Upgrade You), “Ring the Alarm,” “Kitty Kat” (yes, Cat), “Freakum Dress” (Freak Them Dress), “Green Light,” “Irreplaceable,” and “Resentment,” along with a remix of one of the songs (“Get Me Bodied”) and an excerpt (“Listen”) from theDreamgirls movie Beyonce stars in. Just as Beyonce has accepted the current inclination of her generation to use irregular spellings, she has accepted certain questionable aspects of feminine imagery in both photographs and lyrics. One of her album’s photographs is of Beyonce in a bikini and high heels next to a body of water (a swamp?) while holding an alligator leash in each hand, and as the two leashed gators look real, I’m inclined to take this as a symbol of the danger she has knowingly, but not necessarily comprehendingly, placed herself in. Beyonce, like Diana Ross before her, knows of the many women performers who have preceded her own arrival on the public stage, and has offered compliments to them: and Beyonce is trying to place herself in a flattering locale within that tradition and that ambition involves manners and methods dangerous, enriching, exciting, and easy to misunderstand. Just as the high-heeled, bikini-clad image seems improbable for alligator wrangling, or for any serious endeavor but appealing to male hormones, the requirements of glamour and musical form involve disciplines and sacrifices that only the determined can master, and the resulting messages and meanings remain open to interpretation: and interpretation can work first for, then against, a performer.

Beyonce is a writer, singer, and dancer. Beyonce’s B’Day is impressive in its display of her large, sensual, and southern-accented voice, and its attitudes and standards are as current as the morning paper. (How many people will keep this morning’s newspaper?) The rhythms of the songs are inventive; they inspire dancing and are hard to forget. The content of the lyrics—the usual ‘we desire each other, you did me wrong, and I’m going to get rid of you and find a new man’ themes—offer common urges, common responses, and no insight. The most respectful thing I can say is that Beyonce Knowles is observant. However, after listening to these songs I feel as I have wandered into a tawdry live-action version of Town and Country: even knowing Beyonce’s popularity and wealth, I think that all the talk of buying and seducing and vengeance is more soap opera than reality. The lack of imaginative range or philosophical depth is the kind of thing one must move beyond or risk becoming a caricature. Would even Beyonce’s most ardent fans be able to stand album after album of this?

We do not have very many images for women. The mother and the whore, the kind sister and the servant, and the activist and the teacher are among the few. Women performers—who must be attractive, in one way or another (sexual attraction is preferred)—have to manipulate various signs to signal their character, intentions, and value. Misunderstanding is prevalent; and once an image is established, it is hard to demolish it. The young Diana Ross was the smart, driven girl next door who made good; the mid-career Ross was the glamourous icon; and the older Ross is the arrogant rich lady. People only see the evidence that supports their beliefs. Madonna Ciccone Ritchie has run a small record company, and has started a family, lives on an English estate, and writes children’s books, but many still speak of her as if she were the shameless, tastelessly ambitious woman they thought she was when young. Madonna’s work in music is respectable, though it lacks the charm I find in that of other singers: and I have wondered if I would have liked her more had I been but a few years younger (the strength and rebellious spirit she embodied for her audience was already symbolized for me by others). We make use of our public figures: seeing in them attitudes and values that confirm or contest our own. I also think that Aretha Franklin’s audience does not recognize her shyness nor her high regard for different types of popular music, seeing her as an emblem of earthy soul (she is used to represent authenticity and extreme emotion, not complexity). I understand the loyalty of Streisand’s legion of admirers and am puzzled by some of the public’s ridicule of her personality, music, or politics (they find her seriousness intolerable). Tina Turner’s positive evolution is shadowed by her relationship with Ike Turner, and where she saw her strength and loyalty in that relationship, others only read it for abuse and misery. Mariah Carey and Whitney Houston each have their myths. Whether these women were ever any or all of what we thought, we only can guess. However, I did have a small but significant insight into Diana Ross as performer recently. I recall that years ago one person told me that he thought when Ross performed the song “Endless Love” with Lionel Richie at the Academy Awards, she should have looked at Richie more, that her eyes stayed on the audience. I had not noticed that, but after hearing it, I thought maybe his observation—if accurate—spoke to Ross’s priority: connecting with the audience. Decades later I saw a clip of that performance on the internet, and not only did Ross look at the audience with eagerness and pleasure, she looked at Richie affectionately. Her performance was perfect. What’s more, I could see now that while she gave to the audience a wonderfully glamourous image, and a pristine sound, she had disguised how hard she was working. Diana Ross smiled, and her performance was full of subtle movements—such as bending to produce a note—that she did not draw attention to: some singers grimace and sweat to let you know how hard they work and she does the exact opposite—she attempts to erase effort. Looking carefully, I could see beyond the beauty and glamour and smoothness to the effort of a dedicated worker determined to give her best, which included the image of ease. I had been watching Diana Ross for much of my life: and I have seen her anew. How much do other people, who pay even less attention, miss and misunderstand? Beyonce is younger than I am and certainly she has confusions she is yet unaware of: while reporting on her preparation for the film Dreamgirls, a musical fiction inspired by the Motown company and Diana Ross’s Supremes, Beyonce spoke about studying Ross as if undertaking Ross’s biography. Beyonce seemed not to know the difference between fiction and reality. She has said also that she found her film character Deena to be constrained, and that she wrote songs onB’Day to express what the character could not. While interesting, the songs that Beyonce has conjured do not express the individuality, intelligence, pleasure, or spiritual concerns that Ross has explored in her own work: Beyonce’s songs suggest some of Diana Ross’s image (and the image of Dreamgirl’s Ross-inspired Deena), not Diana Ross’s reality, and I doubt that it contains much of Beyonce’s own reality.

I would say more about individual songs on B’Day, but already I hear most of them in many places: on my own radio, and being blasted out of apartment windows, and on video monitors as I walk through stores, and I still read about Beyonce’s work and artistic goals in glossy magazines and free newspapers; and I suspect the reader of these notes has had or will have similar experiences. Beyonce’s music is not a secret requiring explication. In “Get Me Bodied,” after dressing, arranging music and champagne, and a trio of friends and a Rolls Royce, Beyonce sings “I ain’t worried, doing me tonight./ A little sweat ain’t never hurt nobody./ While ya’ll standin’ on the wall, I’m the one tonight gettin’ bodied.” It is a call to sensuality, and it is exhilarating. (Beyonce repeats the line, “I wanna be myself tonight,” a line that says much. Who has she been?) The spirit, if not the circumstance, is one a listener can relate to. In “Sugar Mama,” Beyonce (or her persona) is the one paying the bills and seeing a man as an object of sex: is that radical, or merely a stale wine in a new bottle? In the song the woman narrator is aroused, commanding, motherly, sexual, and when she sings again and again, “Come sit on mama lap” it is a frightening enticement: conjured is an image both erotic and corrupt. “Ring the Alarm,” a composition with the subject of jealousy, in which the singer worries about where her lover will take his money and sexual skill if she sends him away, is an inventive and theatrical production (I am not sure it is actually a song rather than a gathering of sharp fragments); and the work has power. Some of its lyrics are a little clumsy too; and it is not the only musical article about which I might note awkwardness. In “Ring the Alarm” the contradictions can add to a sense of complexity, as when Beyonce sings “If I let you go, I can’t let you go, damn if I let you go,” and “You can’t stay, you gotta go. Ain’t no other chick spendin’ your dough.” Does she want him to stay or go? “Freakum Dress” is—obviously—about a woman’s favorite impressive clothing; and in “Irreplaceable” the singer speaks of quickly replacing a disappointing and vain lover. “Listen” is about the trouble caused when a man does not (listen); and on it, Beyonce Knowles can sound, as she does on a few songs, as if she is pushing her voice unnecessarily, too emphatically. I guess if the reader has not heard these and other songs on B’Day, he or she will soon enough: and will have an interpretation. If the reader is not sure what I think despite my elucidation: I refuse to think of Beyonce as simple, even with evidence that she might be, and I like Beyonce, and, despite my lingering reservations, I like B’Day.

← Masculine, Nurturing: Ben Harper’s Both Sides of the Gun
Looks Nothing Like Jesus: The Killers’ Sam’s Town →