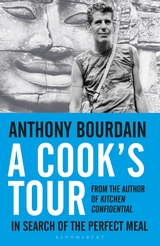 Warning, if you are a vegetarian, or worse, a vegan, stop now. Don’t even read this review, much less the book. If you are at all sensitive about what you read, offended by nasty language, have a tendency to be politically correct, or feel that food should be kept separate from smoke, drink, calories, or sexually charged prose, you should give this book, and anything written by Bordain a wide berth.

Does the idea of eating a still beating cobra heart and following it up with a blood chaser appeal to you? How about a potentially deadly puffer fish? Lamb gonads? Tete de veau (sweetbread stuffed calves face)? An old rubbery iguana? Birds nest soup? What about a sublime 20 course meal at The French Laundry in Napa Valley Ca, or roasted bone marrow at St. John restaurant, London. A Cook’s Tour is partly a foodie’s book, covering both the delectable and the disgusting, and it is also a travel book, tracing Boudain’s course through Tokyo, Vietnam, Cambodia, Portugal, Spain, France, Morocco, Russia, Mexico, California, Scotland, and England. There is plenty of gossip, especially in England, where the celebrity chefs get a real going over. Helen Hunt, Mel Gibson, Judy Collins, and Andrew Lloyd Webber don’t do too well either. There is also drunken ranting, overeating, not as many drugs as in Kitchen Confidential, but still some hashish and a few funny cigarettes, and surprisingly, a lot of rather profound insights, not only about food, but about life. Bourdain’s Kitchen Confidential
was as fun as it was gross and A Cook’s Tour is equally enjoyable, fast paced, funny (laugh outloud funny at times), and nicely balanced between sensational, informative, self-reflective, self-obsessed, thoughtful, and vindictive.

A Cook’s Tour is ostensibly about Bourdain’s quest for culinary perfection, but it isn’t really about that. Firstly, Bourdain himself admits that perfection is a relative and unimportant term, touching on fuzzy things like context and memory. Bourdain likens his trip to a kind of culinary boy’s own – an unreasonable, overromantic, uninformed, and foolhardy quest for “the kind of melodramatic thrills and chills” yearned for since boyhood. It is also about the quest for magic. Food magic. Not so much perfection, as an exploration of the “mystical, magical aspects” of food in all its exotic forms, and in its own context. A Cook’s Tour is the search for the really fresh, the really interesting, and the really unusual food in a kind of real fictional setting – reality TV for the kitchen. The book is also very much about the cultures Bordain is visiting, and an American’s perspective on these things. Aside from his much noted feelings towards the “Vegan Taliban”, Bordain keeps an open mind about the things he sees and the people he meets, and tries to write about them with sensitivity and understanding. He also provides some historical and sociological background, particularly to countries like Vietnam, Cambodia, rural Mexico, and Japan, and the traditions within those countries.

Bordain remains the focus of the book, which is as much a diary as a travelogue foodlog, but there are other characters. There is the camera crew, who follow Bordain about and who generally manage to capture unflinching film footage of copious pig blood, getting “film gold” while torturing a food poisoned Bordain by refusing to turn off Jerry Lewis, and keeping up with the antics while producing a television series. There is also the long suffering Nancy, Bordain’s wife, who we met for the first time in Kitchen Confidential and get to know better through Bordain’s letter home, which opens the book, through her threats of divorce court if he eats monkey brains, and when she joins the “girl’s night out” in Basque Spain. There are also many local characters, from Jose his boss who takes Bordain to his village in Portugal, his younger brother Chris, who joins Bourdain on a trip down memory lane in their childhood holiday village in France, “desperately seeking epiphany”.

And then there is Vietnam. Vietnam figures so prominently in this book it is almost a character, with its beautiful women, its incredibly coffee, and its delicious and fresh food. There are several chapters devoted to Vietnam, which Bordain falls in love with. One of the most powerful moments in the book occurs in Vietnam when Bordain sees a beggar in Saigon scarred head to toe from napalm burns. The immediacy of Bordain’s response, and his shame comes through clearly, as he swings from hungry gourmet to everyman, shamed by what he takes full responsibility for doing:

How could I come to this city, to this country, filled with enthusiasm for something so…so…meaningless as flavor, texture, cuisine? This man’s family has very possibly been vaporized, the man himself transformed in to a ruined figurine like some Madame Tussaud’s exhibit, his skin dropping like molten wax. What am I doing here? Writing a fucking book? About food? Making a petty, useless, lighter-than-air television fucking show? The pendulum swings all the way over and I am suddenly filled with self-loathing.

There are other such soul searching moments, as when Bordain experiences disappointment and rage in France only to realise he is missing his father, or his sense of communion with Japanese businessmen, his feeling of disorientation and unbelonging in Morocco, his diatribe on the over-legislation of food in the US and Britain: “Try and eat an American chicken and you will see what looms: bloodless, falvorless, colorless, and riddled with salmonella – a by-product of letting the little guys go under and the big conglomerates run things their way”.

The book is full of tastes, and wonderful food descriptions, and if you are the sort who (like me) tends to crave what they are reading about, you will swing from seriously desiring tapas: “a fresh duck egg, whole, yolk and white undisturbed, which had been removed carefully from the shell, wrapped in plastic with truffle oil and duck fat, then lightly, delicately poached before being unwrapped and presented, topped with wild mushroom duxelles and a dusting of dried sausage”, thick Russian Borsht, mutton tangine with sweet mint tea, super fresh edomae sushi, roasted bone marrow with parsley and caper salad, croutons, and sel de gris at St John in London, stuffed poblano peppers, and spicy Vietnamese soup with hot rice cake. Better get that wanderlust going again.

Not everything is degustatory rapture though. There are some foods that even make Bourdain gag. There is black bean “natto”, which Bordain eats for breakfast in Japan: “Given a choice between eatting natto and digging up my old dog Pucci (dead thirty-five years) and making rillettes out of him? Sorry, Pucci.” There is dog smelling tripe in Cambodia, pigeon’s head amidst birds nest soup on top of a huge seafood lunch (you can guess the outcome), three day old stuffed veal face(“Tete de Veau”), cobra bile, and someone’s old pet iguana.

Like Kitchen Confidential, A Cook’s Tour is not for the faint of heart and delicate of stomach. Bordain’s prose is very straight, and often ribald, and he doesn’t censor himself or his descriptions a bit. That is part of the book’s charm. There is an intimacy and honesty in Bordain’s style which makes you feel as comfortable with the lack of pretence as you would if you had known Bordain for years. In the meantime, you will find yourself liking him regardless of what he says, does, or who he bags. Even if you don’t, the book is full of fun, sensual food writing, and some serious reflection amidst the flavours.