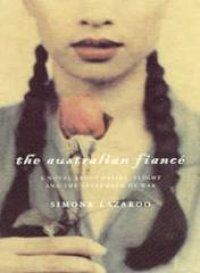 The Australian Fiance works just below the level of consciousness. Submerged, with its quiet pain, a silent witness, watching the action from deep below the surface. In Singapore, just after the end of World War II, a young Eurasian woman, beautiful, and damaged from Japanese occupation and the role she had to play as a prisoner, meets a handsome Australian. He pursues her, and convinces her to return to Broome, Western Australia as his fiance. The two main characters, both nameless, except in terms of their roles within the story: the young Eurasian, and the Australian Fiance come together and come apart, parallelling each other in their pain and hunger, and coming to terms with the truths both have been hiding from. The language of this novel is beautiful, moving chapter by chapter between first and third person; but always from the point of view of the Eurasian, who is recalling her tale many years later, slipping in and out of the present and past. The narrative voice, especially when in third person, has the rhythm, and even occasionally the structure, of poetry:

If not love, then, what?
Another hunger.
What kind of hunger?
Not food hunger. Acknowledge-me hunger. Leave-me-more-of-your-offerings hunger. Bring-me-back-from-the-dead hunger.(49)

The words leave us with a sense of meaning rather than a clean expression of it, as good poetry does. The Eurasian woman takes us inside her inchoate longings, her desires and shame, as she moves towards a life which is “normal”, only to find that there are many kinds of love, and that truth and meaning are as uncertain as war and guilt.

One of the main devices used throughout the novel is the reference to photography. The fiance is an amateur photographer, and each chapter begins with a quote from his “Twin Lens Camera Companion”. His photographs provide a series of concrete images; freeze frames in the midst of the shifting emotions; snapshots in time. They pick up the light imagery which runs throughout the story: “She closes her eyes to this light that is like the end of light”(48), or rooms that go from darkness to a sudden flooding of light, and also provide another dimension of removal from the first person narrative which shifts into third, and finally moves into a photographic image. There is the cardboard hatbox of photos she finds: the Japanese woman’s snaps of Broome immigrants – a series of lives, discarded, relegated to the top of a cupboard. As the Eurasian woman takes up photography herself, using the Australian’s old brownie box she tried to take from him, she finds some meaning in the frozen image, and in the final two photos which bridge the immense distance between past and present.

There are many parallels in the novel; links between the seemingly incongruous. The most obvious of these is the damage and self-denial of the young Eurasian and the Australian. While her pain is much deeper, he is also damaged; limited by his parents overt authority, his cowardice, and sense of obligation towards his race and position. Her damage is more complex, moving from the simplicity of her life before occupation and through the war, where we share directly in the hacking and tearing, Lazaroo again using poetry to bring the reader into the intensity of the moment; into full sympathy. Where the Eurasian woman is the Australian’s opportunity for truth and freedom, the “child” is hers; and both of them miss the moment. Miss the importance of what is real, and meaningful, until it is gone. The Eurasian woman and the “child” mirror each other this way, as both look for a kind of annihilation; of freedom from the oppression of being themselves; being orphaned in a way, being other than white, or other than Japanese; both innocent victims. Another parallel is between the Australian’s parents and her Japanese oppressors. While the Eurasian sympathises with the parents, sees their fears and forgives them their prejudice and superficiality, linking their fear to hers, it is really the Japanese they mirror, in their dehumanising; their clinging to “quality”, their “European” heritage, money and status.

This prejudice and fear is another theme in the novel, especially as it manifested itself in the late 1940s in Australia. “What percentage of you’s European blood?” the customs officer asks her, to which the Australian fiance replies “I’ll make sure she doesn’t do anything too foreign.” The prejudice is not only towards her Asian appearance, and the child, but also towards her past, her background – the shame of being a prisoner; a comfort woman, things she had no control over. The Australian’s parents confront her brutally: “a matter of principle not heart”, cancelling her visa and accusing her of dishonesty. There is the aboriginal woman who shows her kindness and speaks of “swallowing the boss”, or the woman begging at the door, whose wet humiliation at the hands of the Australian’s mother again mirrors the later humiliation of the Eurasian woman.

However, the overt themes of war, prejudice, and the all too human limitations and parallels between seemingly different people are minor themes compared to the overwhelming one of love, loss and self-knowledge. There is the love between the Eurasian and the Fiance, and the nature of that love, fleeting, momentary, like a photograph, but perhaps more importantly, the enduring love between the Eurasian woman and the child, something immutable; magic, even in death.

The Australian Fiance is a deeply moving novel. Not so much because of its story, which has moments of intensity, but is primarily, a simple story of love and loss. Rather, it is the exquisite language, the poetic transcendence affected by Lazaroo’s narrative which draws the reader into the character of the Eurasian woman, submerged with her, until we are also nameless, nationless, simultaneously guilty and innocent, soft and hard, lost and found.

← A Review of The Joy of Weight Loss: A Spiritual Guide to Easy Fitness by Norris Chumley
Interview with Simone Lazaroo →