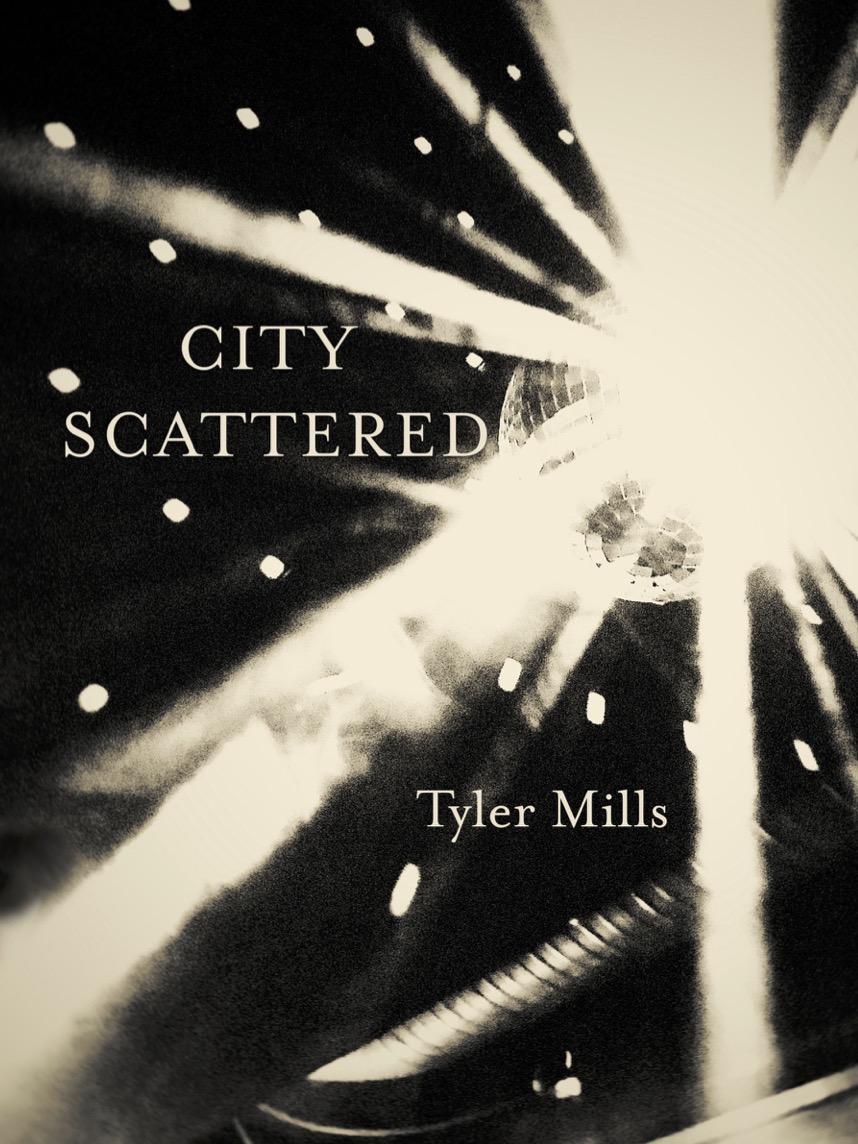 “Attention! Watch out! A review of Tyler Mills’ City Scattered

It was October 29, 1923 and these words were shouted through German radios through its original station ‘Funk-Stunde Berlin‘. The first Germans to hear these words must have marveled at how sound emerged through the inanimate object placed before them. Considering the strife and difficulty the German populace was struggling through following World War I, it must have been a wonderous event.

Tyler Mills’ new poetry chapbook City Scattered is in four voices, like a poetic radio play set in Berlin in 1930 when radio was booming. Mills weaves four voices/characters in an emulation of an old-style radio drama that invites the reader to explore the lives of women at this time in the context of a society dangling on the edge of totalitarianism and a world on fire. Each of the four steady voices throughout the book have poems that enrich the story we are invited into.

Mills sets I/Self/Woman in Berlin as the main voice. This character seems to be in her early 20s and has already lived through the suffering and unspeakable tragedy of WWI, the global flu pandemic of 1918, incredible inflation and the economic collapse of 1929. Berlin in 1930 was a time between wars when women briefly had an appearance in the cultural movements of society rather than only being allowed to be in the home bearing children.

Through I/Self/Woman in Berlin, we see this time in Berlin, we see what women face, including extreme poverty, sexual harassment, unemployment, hunger, and choices people make for survival. Mills paints a striking verbal portrait of the poverty and absurdism that inflation has caused, as when she overhears someone say, “We’ll wallpaper the nursery with money.”

Omnipresent, is the constant historical tension of pre-Nazi Berlin, where poverty parallels the decadence of the Berlin nightlife and everything seems fine on the surface when underneath it is painful, roiling and increasingly more dangerous.

The additional characters – Chorus, The Study, and Interlocutor – add to the story of I/Self/Woman in Berlin. Chorus often sings in first person, but at one point sings in a collective voice, including her character in the chorus of voices of women’s experiences:

We come to the city in search of adventure and roam
like comets with our small incomes.

This is a reminder of both the new-found freedom young women were experiencing as they left their more rural homes for the excitement of the city and the economic fallout and transitional societal dynamic that had a strong effect on women throughout the 20s and 30s in Berlin and around the world. Chorus sings about typing faster and faster and then later about losing her job, “I was dismissed without notice.”

The voice of The Study adds to the sense that things are not quite as they seem; a self-aware character that has a deeper understanding of what awaits the characters and society in general with a sorrow and cynicism that repeats throughout the drama.

The world is not as it is but as it appears—
the splendid view of the city by night star-spangled
like denial.

Within this wondering of form and body, I/Self/Woman in Berlin wonders about a tree enclosed by a wrought iron fence.

It’s ashy branches// bunch up at the sky in shivering bouquets// of green and shimmer as the city wakens// like water shoving through the wreck// of a ship: the pewter cups and spoons,// the bones of the captain at the hull.// At the top, all is calm.

Again, things look fine, in a way. Some women have jobs, careers, safety, and a degree of security, though there is always the threat of unemployment, food shortage, harassment, and assault. In this, the character I/Self/Woman in Berlin is a renegade of sorts. She is making her way the best she can in the context of what is going on around her, and she is a chronicler of her life, the events going on, and the atrocities to come.

The final voice of the Interlocutor speaks to all that has been ignored, which seems to be another poignant metaphor when speaking of oppression of women as well as about the ways in which history repeats. The Interlocutor is the only character who can move through time and space and who brings forward ways that inequality pushes women to make choices they may not have otherwise made, even today.

At the end of the book, the Interlocutor asks:

Am I the I of a future,
the I who
wants to return
as a warning? How can I be?
How can I?

The parallels between 1930 Berlin and the world today are unsettling. A pandemic, a war, an economic catastrophe, a time of rising extremism, and through it all, women still struggle in societies that do not recognize their work or worth. The Interlocutor then takes on the role as the ‘any person’ today who might speak up in warning to an increasing anti-democratic sentiment, to rising applause for fascist policies, laws, and rhetoric that keep people from having full rights under the guise of making the country better.

City Scattered is not long, about 28 pages, but it is rich with meaning and story that is captured through the simple device of a radio drama. Through the poetic verse and intentional scripting, we meet the characters and learn not only about the intersection of Germany and women’s historical fight for rights during those “golden decades,” but also about the ongoing threat of history repeating itself and women’s ongoing battle for recognition, equality, and personhood. As such we, the readers, become the “I” of the past and the future.

In the voice of Interlocutor, Mills asks if we can see the past as a warning that will change our behavior now to avoid all the horror that could be relived. If we allow ourselves to be carried through the story and its dynamic imagery, Mills’ book gives us the opportunity to ask of ourselves how we can make a difference. It seems fitting to realize, then, that the first words spoken through German radio were Achtung, Achtung – Attention, Watch out– An eerie calling to our future selves.

About the Reviewer: Liza Wolff-Francis is a poet and writer with an M.F.A. in Creative Writing from Goddard College who served two terms as a member of the Albuquerque Poet Laureate Program’s Selection Committee and continues on the organizing committee. She was chosen to write in Tupelo Press’ 30/30 poetry challenge for the month of September 2020. She was co-director for the 2014 Austin International Poetry Festival and was on the 2008 Albuquerque Poetry Slam Team. Her writing has been widely anthologized and her work has most recently appeared in the magazine El Palacio: Art, History, and Culture of the Southwest, Steam Ticket, We’Moon, among others. She has a chapbook out called Language of Crossing (Swimming with Elephant Publications, 2015) and she blogs to support mental health through writing at Writeyourbutterfly.com.